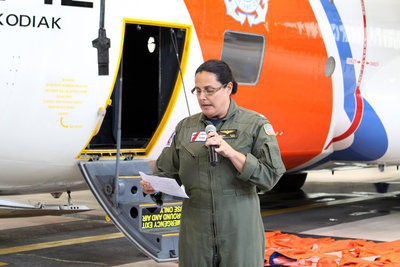 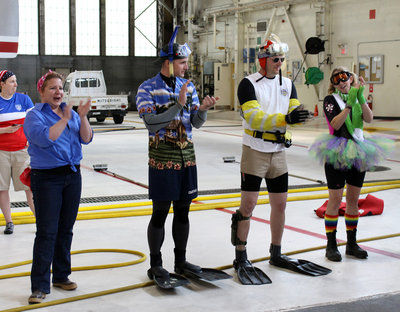 Participants in the costume contest clap for the person they think should win on Tuesday. (Julie Herrmann photo) 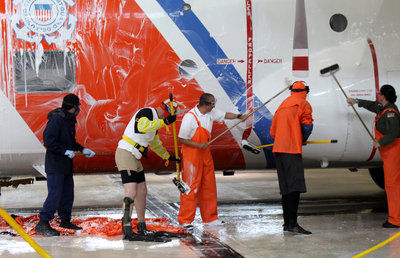 Coast Guard members scrub down a C-130 Hercules and each other on Tuesday. (Julie Herrmann photo)

Participants in the costume contest clap for the person they think should win on Tuesday. (Julie Herrmann photo)

Coast Guard members scrub down a C-130 Hercules and each other on Tuesday. (Julie Herrmann photo)

The Coast Guard’s Air Station Kodiak celebrated 50 years since it gained the air base designation.

The base celebrated that in conjunction with a monthly morale-boosting day.

The Coast Guard base in Kodiak officially became a designated air station in 1964.

“That signified their permanence here in Kodiak,” Coast Guard spokesperson Diane Honings told the Mirror. “This is their 50th anniversary, take two.”

It’s “take two” because the Coast Guard first began flying in Kodiak in 1947 as an air detachment to the naval air station that was already here. That anniversary was celebrated back in 1997, Captain Melissa Rivera noted in her remarks.

Now, 50 years on as a designated air station, organizers combined the small celebration with a monthly morale day.

To commemorate its 50th anniversary, the Coast Guard is creating special anniversary patches, which will be sewn on jumpsuits for Coast Guard members who are stationed at the base during 2014.

During its morale-building events, Coast Guard members could elect co-workers and friends to wash a C-130 Hercules airplane. Each vote cost a quarter, and raising $1,200 for Coast Guard’s Morale, Wellness and Recreation Program.

Rivera received 481 votes, the second-most votes and joined about a dozen others in donning rain gear and scrubbing down half the plane.

Getting added to roster of scrubbers did not require that many votes, however. Two people had only one vote apiece cast for them and still made the list.

Colorful costumes ranged from a hobo with a “Will wash plane for food” sign and tin can, to a shorty wet suit and tutu, to Rosie the Riveter in blue with a polka-dotted bandana.

The hobo drew the loudest cheers, received an Amazon gift card and said as he walked away, “I’ll use this to feed my family.”

Still later, teams signed up for the Herc-pulling contest, where teams of 10 signed up to try to pull a C-130 50 feet.

In the contest, the Base Kodiak team defeated Air Station.

One day after ordering a stay on the effort to recall Gov. Mike Dunleavy from office, Superior Court Judge Eric Aarseth reversed his ruling, claiming the order was an administrative mistake.