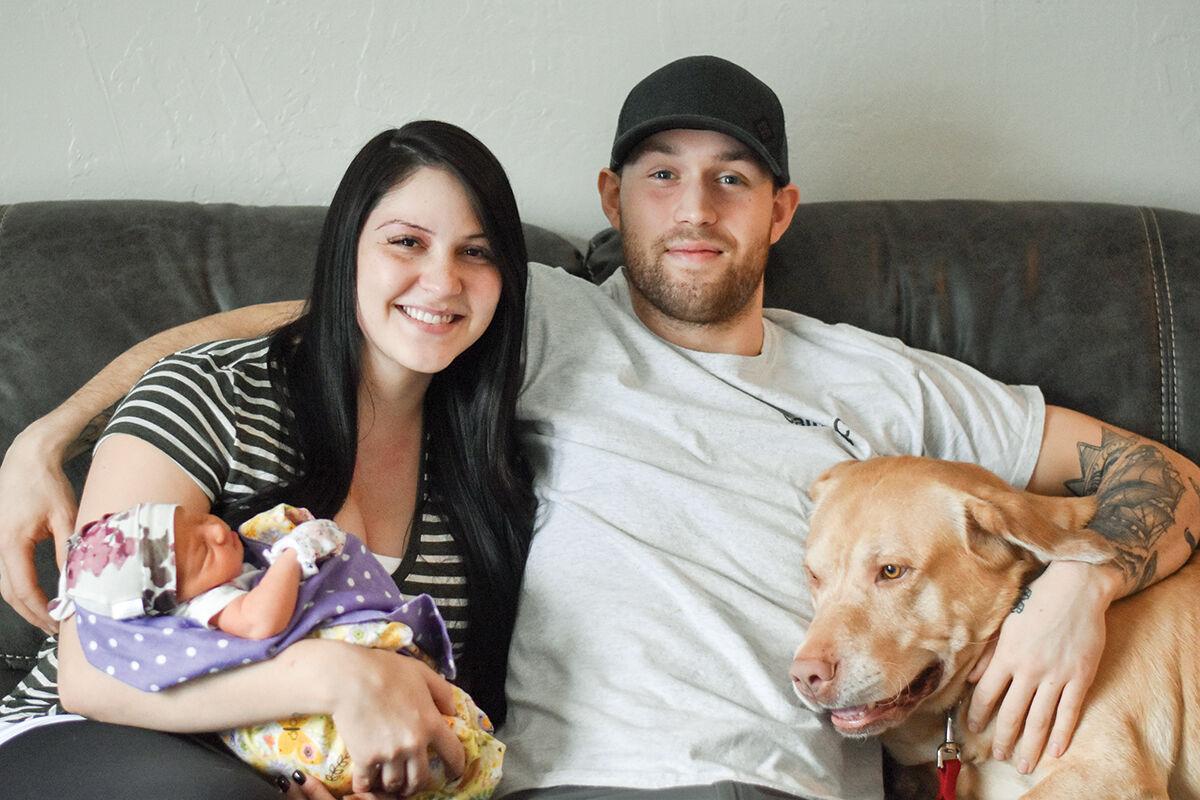 Parents Dyonne Bartleson, left, Beau Mann and Cooper the dog pose for a photo with newborn Berklee, who was born on Jan. 1. 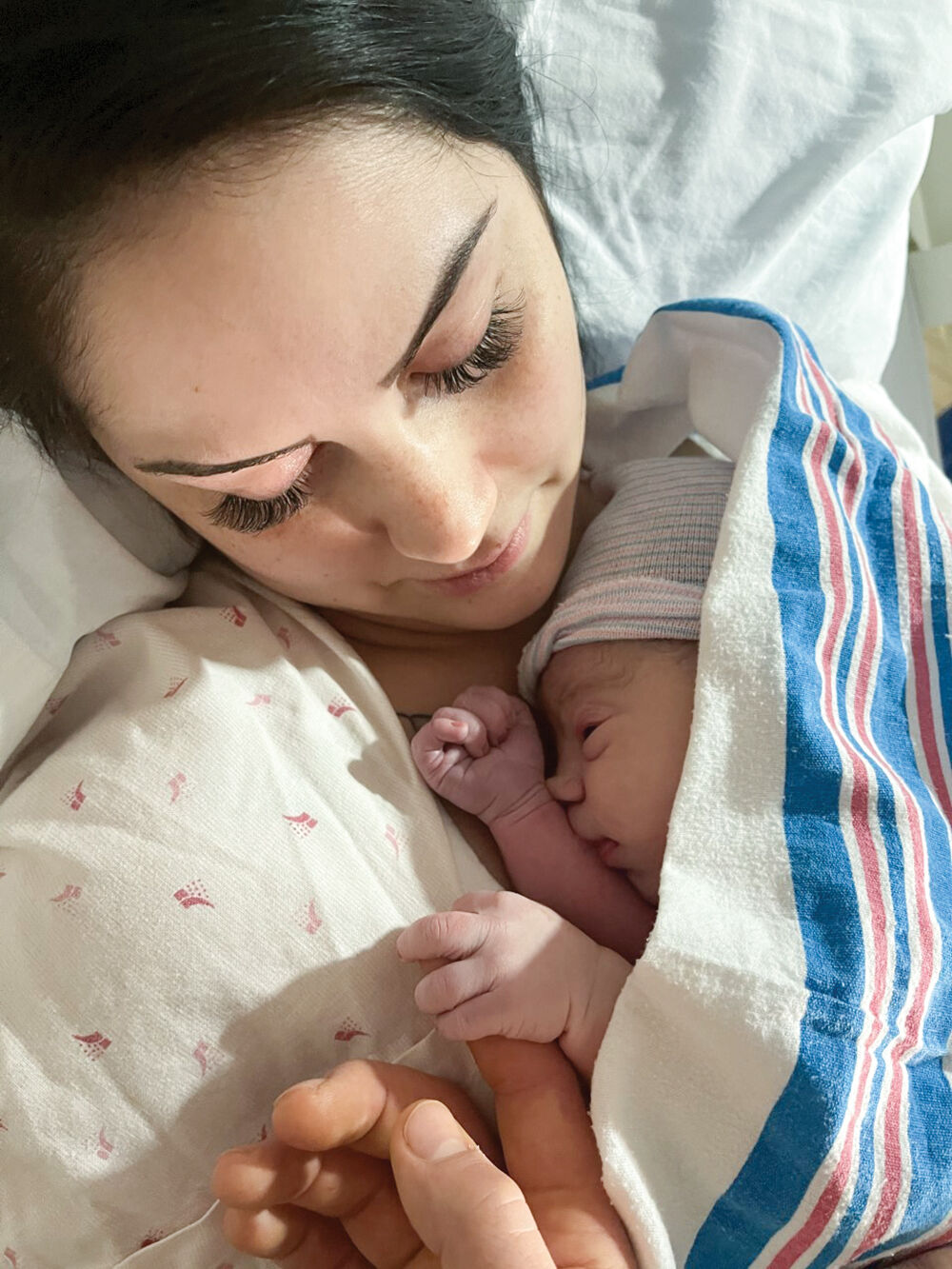 Dyonne Bartleson holds her newborn baby, Berklee, after giving berth to her on Jan. 1.

Parents Dyonne Bartleson, left, Beau Mann and Cooper the dog pose for a photo with newborn Berklee, who was born on Jan. 1.

Dyonne Bartleson holds her newborn baby, Berklee, after giving berth to her on Jan. 1.

Pretty much everyone on the planet was looking forward to the end of 2020, but Kodiak couple Dyonne Bartleson and Beau Mann had something extra to celebrate when they gave birth to their first child on New Year’s Day — the island’s first birth of 2021.

Bartleson, an assistant manager at Near Island Coffee, said the birth went well with no complications. She stayed in the hospital with her baby for two days before being discharged.

Mann is a crew member on the F/V Northern Endurance. Just days before Bartleson found out she was pregnant in May, the vessel’s captain had jokingly predicted that Mann would be a father within a year.

Mann was working on the vessel, delivering black cod on the mainland, when Bartleson called him with the news.

“She called me crying,” Mann said, adding that his first thoughts were that she crashed his car or broke a street bike he had bought for her.

Initially, the couple decided to keep the news to themselves in case there were complications with the pregnancy.

However, with the close kinship among crew members on the boat, Mann could not keep the exciting news from his crew mates.

“I ended up telling them because we are all so close on the boat,” Mann said, adding that his skipper was happy for him. “He was super stoked for me because he knew I eventually wanted kids.”

The pregnancy was an unexpected but welcome surprise. Bartleson did not think her baby would be born on New Year’s Day. The due date was first estimated to be Jan. 2, but was later pushed back to Jan. 8.

But Bartleson’s water broke at 5:36 a.m. on Jan. 1. Without any contractions, she wasn’t sure if it was from the pregnancy or something else. Once the contractions started, her doctor asked her to go to the hospital to verify that there had been no ruptures.

The couple named their baby Berklee after one of their friends suggested it during a barbecue.

“We were all talking names and my buddy Johnny (said), how about Berklee,” Mann recounted.

The couple had been thinking about names that ended with “lee,” and almost chose Blakelee. They decided they liked Berklee better.

Bartleson said the pregnancy was easy and that she had no morning sickness or complications, but had cravings that mostly consisted of chocolate and popsicles.

Bartleson continued working at the coffee shop during the pregnancy, but she was careful to social distance in her free time, and avoided going to the grocery store whenever possible. She only invited her closest friends to her home.

The couple’s dog Copper, a 4-year-old yellow Labrador, quickly took to the baby. Despite the canine’s wild energy, he has been good around little Berklee, Mann said.

Bartleson noted that the dog has become protective around Berklee, acting scared when packages are dropped off at the house and barking at people who walk too close to Bartelson’s truck.

“It’s pretty cool,” Bartleson said about the New Year’s Day birth, adding that she and Mann will keep Berkelee’s birthday separate from their Christmas celebrations in the future.

In the meantime, the young couple is focused on welcoming Berklee into the family. One evening after the baby was born and Bartleson had drifted to sleep at the hospital, Mann stayed awake holding his newborn daughter.

“I was just holding her and I was like, she’s just so cute,” he said.