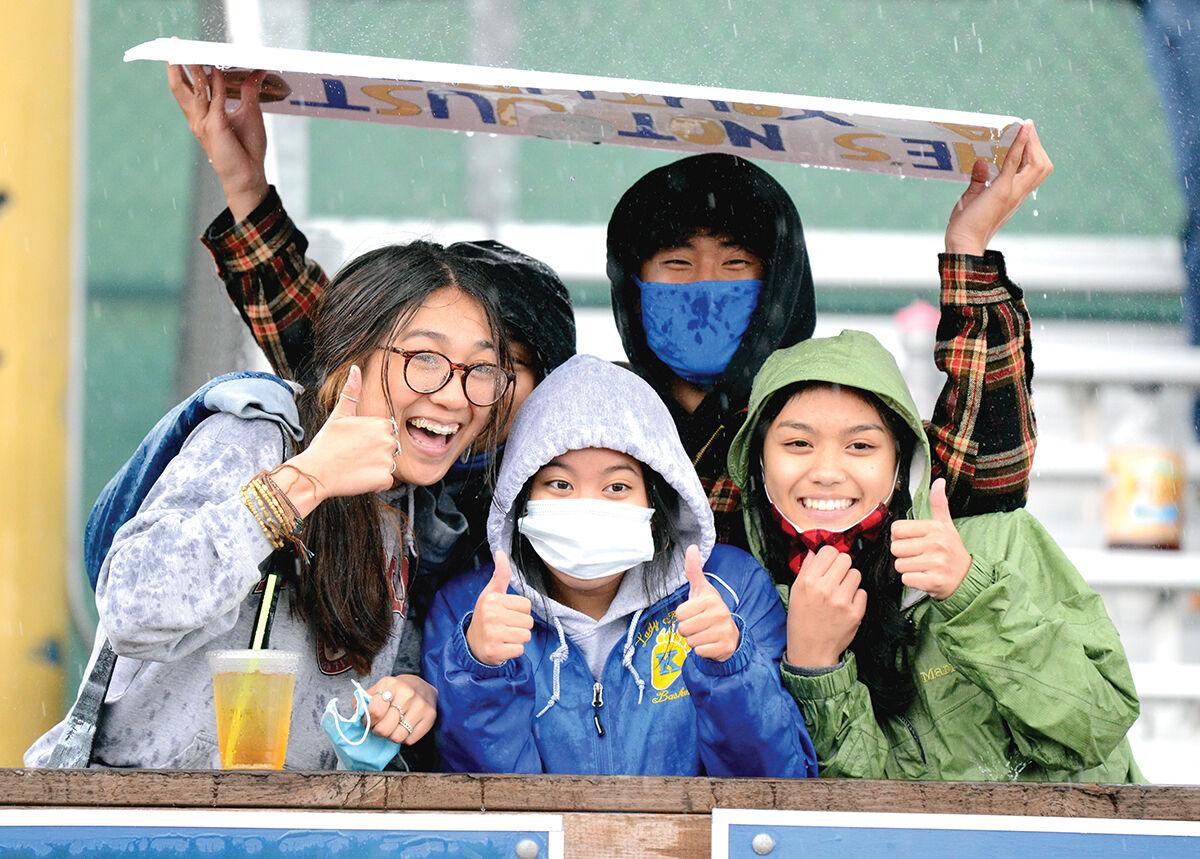 Football crazed fans braved a torrential downpour to watch the Kodiak High School football team play its first and only game of the season Friday at Joe Floyd Track and Field. Because of school district imposed COVID-19 travel restrictions, the team played an instrasquad game to honor its 23 seniors. 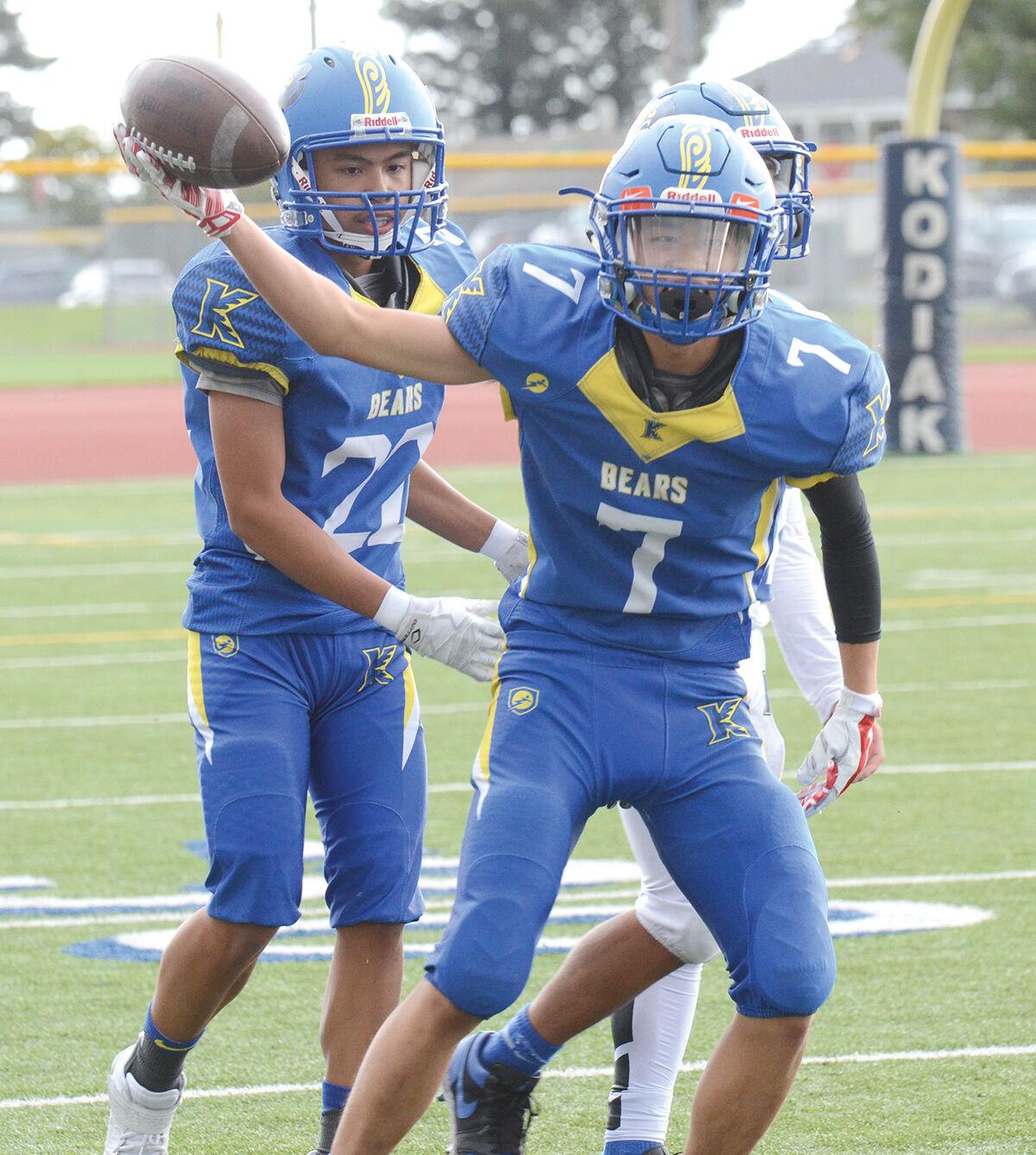 Kodiak High School senior Juho Shin celebrates after getting an interception in a blue/gold game Friday at Joe Floyd Track and Field. 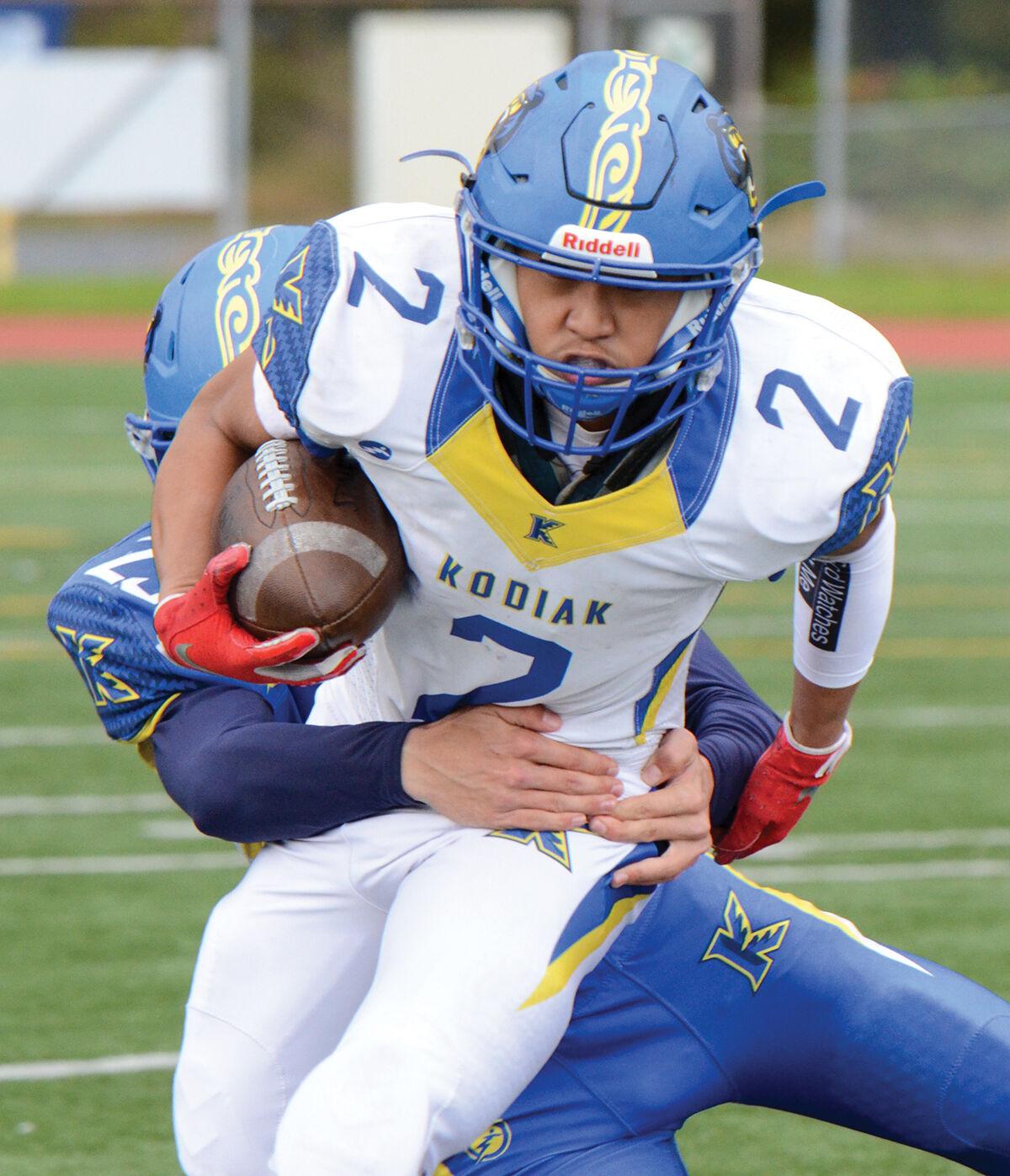 Joren Valdez gets tackled by Mason Swearingin during the Kodiak High School blue/gold game on Sept. 18 at Joe Floyd Track and Field. 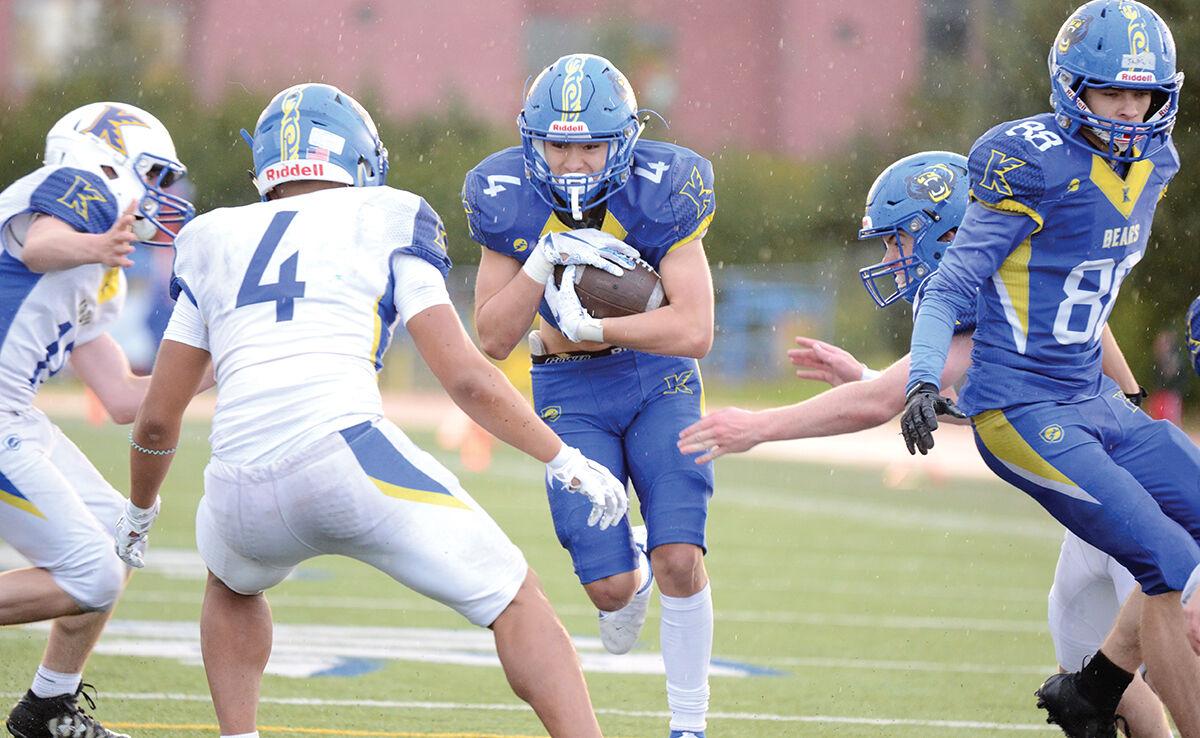 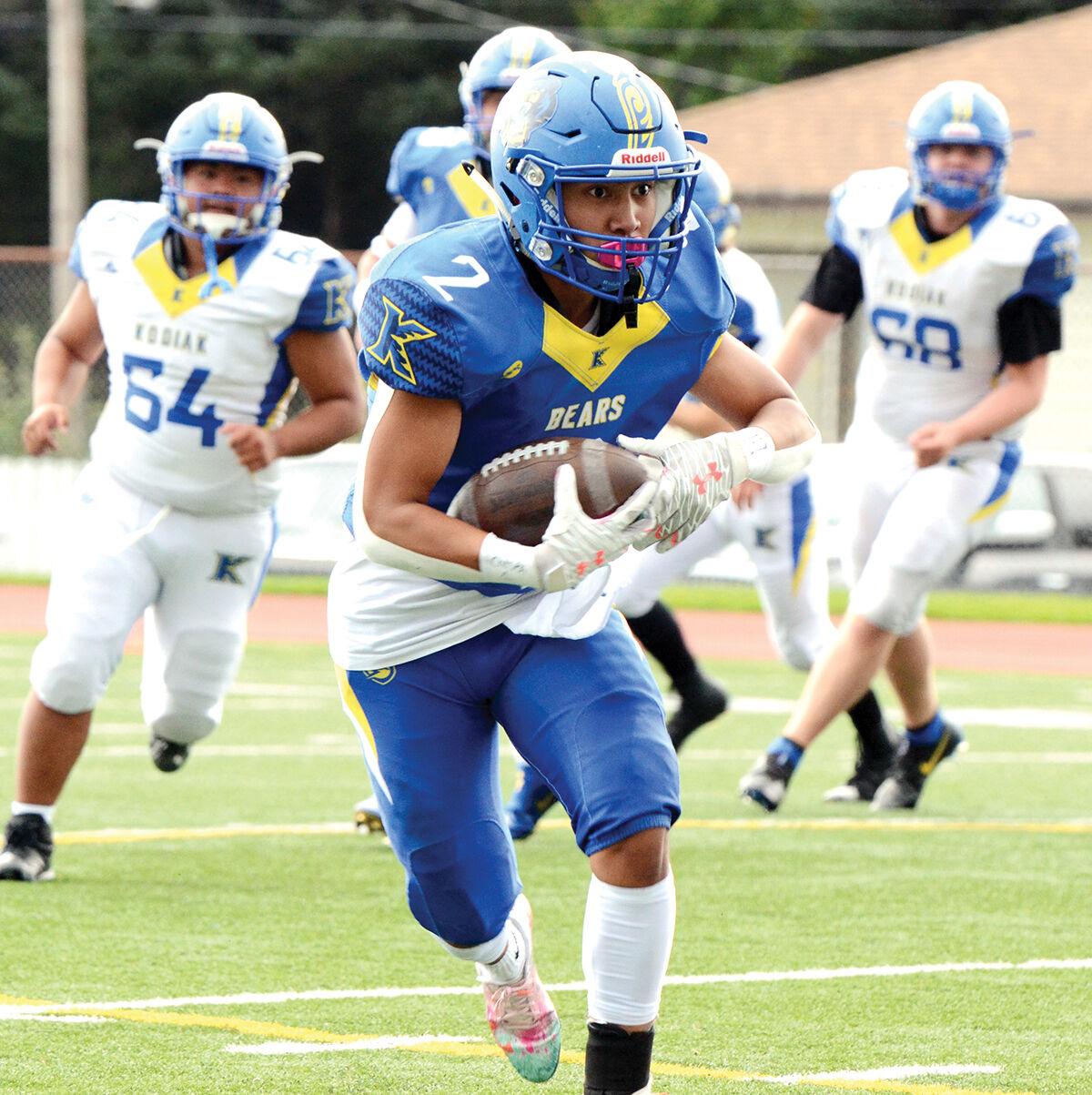 Igan Galindez breaks away for a long run.

Football crazed fans braved a torrential downpour to watch the Kodiak High School football team play its first and only game of the season Friday at Joe Floyd Track and Field. Because of school district imposed COVID-19 travel restrictions, the team played an instrasquad game to honor its 23 seniors.

Kodiak High School senior Juho Shin celebrates after getting an interception in a blue/gold game Friday at Joe Floyd Track and Field.

Joren Valdez gets tackled by Mason Swearingin during the Kodiak High School blue/gold game on Sept. 18 at Joe Floyd Track and Field.

Igan Galindez breaks away for a long run.

Most of the 23 seniors on the Kodiak High School football team started their playing careers with the Kodiak Football League, matching up against each other on often rainy and windy weekday games in September.

In this weird and wacky season, it was only fitting that their careers ended in a downpour while delivering hits against each other at Joe Floyd Track and Field.

“We have played together since the eighth grade — that is what brought us close. We wanted to finish it off,” said senior Juho Shin after the conclusion of Friday night’s blue/gold game that represented the team’s first and only game of the 2020 season.

Because of district-imposed COVID-19 travel restrictions, the football team was faced with the reality of not playing against another school this season. The blue/gold game turned into much more than a tune-up for the regular season — it was a three-hour celebration of the work the players have put in since beginning practice in July.

“This meant a lot,” senior lineman Jaemar Tolentino said. “The amount of dedication and hard work everyone put in — blood and sweat — is amazing. All of us have good chemistry. We are all a team.”

After senior Jack Malloy hit senior Corbit Brewer for a 15-yard scoring pass on the game's final play, tears started flowing from players as they hugged each other and huddled as a family for the last time at midfield.

“You guys were closer than any other teams that I have ever had because of what we all had to deal with,” coach Bryan Ellsworth told his team after the game.

Ellsworth’s goal was to provide the players with as much of a game-day experience as possible. A Coast Guard helicopter did a flyover, the national anthem was sung, the public address announcer pumped up the fans and the game was broadcast on local radio station KVOK. The coaching staff created a glossy commemorative program for the seniors, and an after-game dinner was catered by Maria’s Place.

“This was our chance to let everybody else see what we have been working so hard to do and their chance to display their ability and their talent in front of a lot of people,” the coach said.

There were plenty of punishing hits and personal fouls as the players didn’t hold back against their friends. This was anything but a scrimmage, which was evident by the biggest blue/gold game crowd ever. Even the hearty fans remained in the stands when a driving rain hit in the first quarter.

“We didn’t know what was going to happen with the football season,” Malloy said. “The community came out and we made it a big event. I feel like we delivered — it was a really fun time and the guys really enjoyed it. We are really senior-heavy and are going to miss each other.”

Friday’s game was the first and last for Malloy in a Kodiak football uniform. He transferred to Kodiak for his final season. His dad is a teacher for the district and an assistant coach on the football team.

“I just wanted to play football one last time, and I wasn’t sure if it was going to happen in Oregon,” said Malloy, who has played two summers for Kodiak’s American Legion baseball team. “I came here and am so glad I did. I am brothers with all these guys. It has been a long ride, but I have enjoyed it.”

The blue team — led by a three-touchdown day from JM Ticman — walked away with a 31-18 victory. Ticman caught touchdown passes of 25 and 49 yards from Tito Sabangan and added a 40-yard scoring run that capped the blue team's scoring. Shin scored the blue team’s only other touchdown on a 42-yard run that opened the scoring just minutes into the contest.

“This was our first game and last game. We put everything out there. It got pretty emotional,” Shin said.

The gold team — wearing white tops — got a 3-yard touchdown pass from Malloy to AJ Arevalo and an 8-yard scoring run from Joren Valdez. Blue led 31-12 at halftime.

“I wish we got to play someone else, but I’m thankful I got to be out here with the guys and share that moment — I think it was really big for all of us,” Malloy said.

Alaska’s all-Republican congressional delegation and Republican Gov. Mike Dunleavy are calling for flexibility from Canada regarding Alaskans traveling in and out of the neighboring country.

Agencies form their plowing plans to grapple with snow removal

“My staffing level at public works for the last 30 years has not increased one position,” Jacobson said during the meeting. “But the amount of roads and sidewalks we maintain has gone up exponentially.”