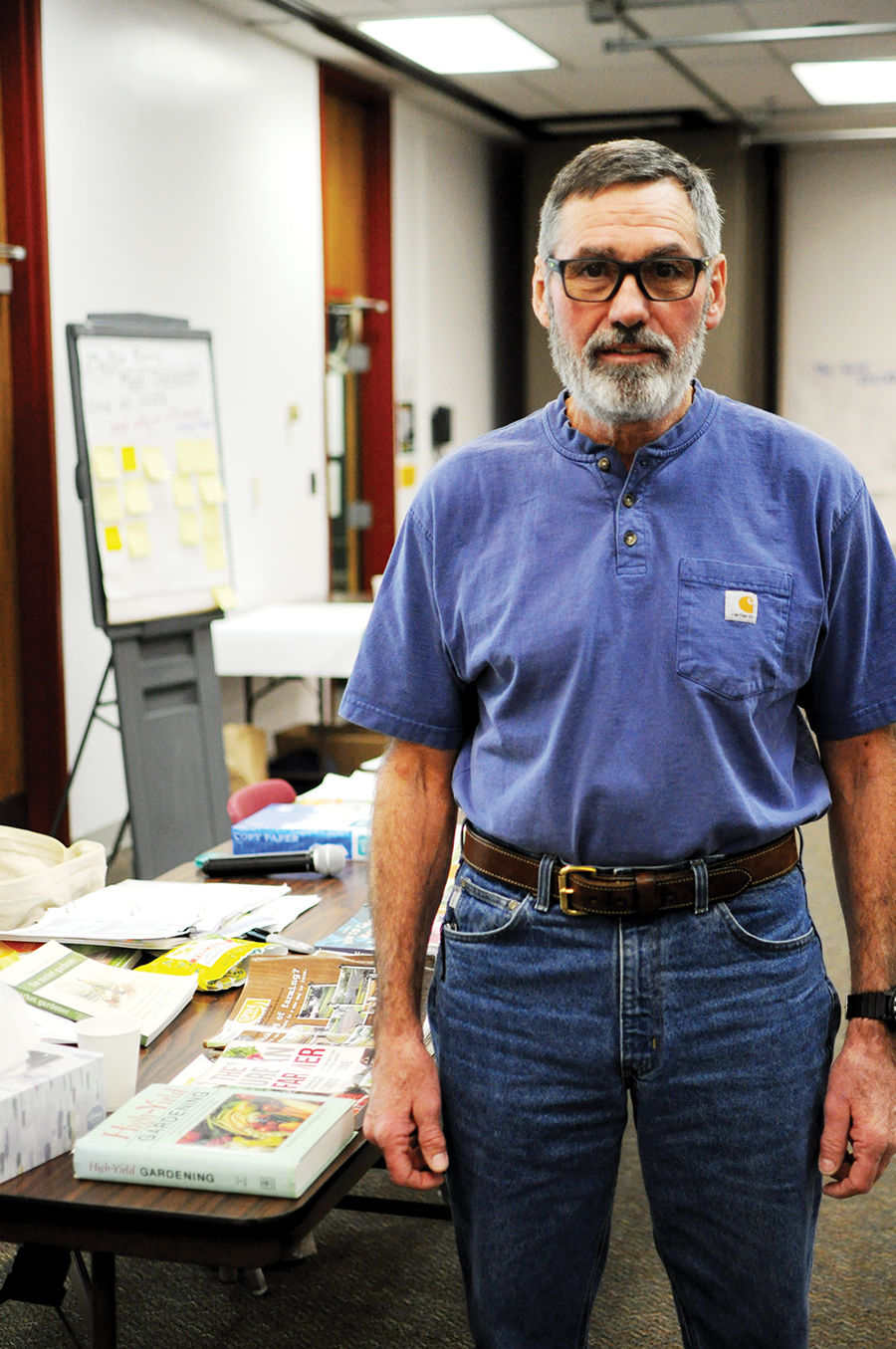 Sam Kenoyer, manager of the tribally owned farm in Larsen Bay, during a farming workshop at Kodiak College on Thursday. 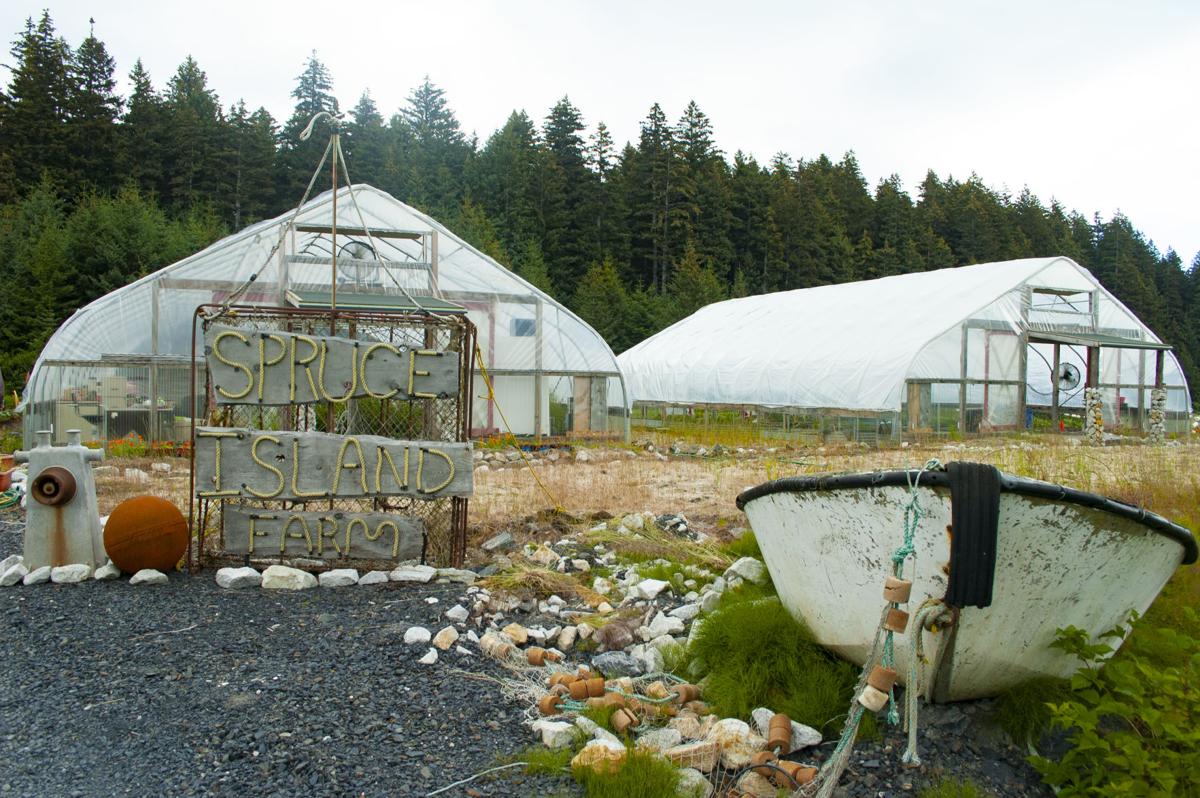 The Ouzinkie tribal farm sold almost $1,500 in produce this summer, with some going to the Kodiak Harvest Food Co-op Midweek Markets.

Sam Kenoyer, manager of the tribally owned farm in Larsen Bay, during a farming workshop at Kodiak College on Thursday.

The Ouzinkie tribal farm sold almost $1,500 in produce this summer, with some going to the Kodiak Harvest Food Co-op Midweek Markets.

Alaska’s produce-growing season may be short, but a dedicated team is hoping to make local vegetables a household staple in Kodiak, where most produce arrives by barge or plane.

The Kodiak Harvest Food Co-op is a community-owned initiative. During the summer, the co-op offered a midweek market, where they sold produce grown by farmers in Kodiak and other places across the state.

But according to Tyler Kornelis, president of the co-op board, the ultimate goal is to have a brick-and-mortar store that sells a wide selection of products, with an emphasis on keeping products local whenever possible. The co-op currently has 473 members, just 27 members short of the 500-member goal they set as a benchmark to begin working toward establishing the shop.

“We definitely need to keep going and recruiting more members once we reach that 500-member threshold. Of course, we want every member of the community to become a member eventually,” Kornelis said.

While the co-op was first established in 2015, this was the first summer it was able to sell local produce. The midweek markets held every Wednesday between June and September gave community members the first taste of what a store would offer, with vegetables grown in Larsen Bay, Ouzinkie and Kodiak sold each week alongside locally canned salmon from the Icicle Cannery in Larsen Bay. Last summer, the co-op sold 1,000 cans. This year, they plan to sell 5,000 cans, with hopes to market them to cruise ship passengers come summer.

“Our goal is to sell local produce and other products as we possibly can, but we definitely needed to bring in produce from larger farmers on the mainland,” Kornelis said. In addition to products from the island, the co-op sold produce from an organization called Arctic Harvest Deliveries, an organization that buys from growers throughout the Mat-Su Valley.

The co-op’s sales and outreach coordinator, Janelle Solinger, has worked with local growers to identify ways to increase their produce next summer. Developing a farm plan now can help ensure farmers know what to plant in the spring so they can harvest throughout the summer and sell to the co-op, she said.

“This was our trial year,” said Kelly Krueger, the co-op board vice president. “Hopefully, producers will grow more. It will be nice to get some new faces onboard.”

The co-op idea was first raised in October 2015, with a planning day focused on community needs.

“A grocery store was identified as one of the needs,” Krueger said.

The co-op board was formed in February 2016. The co-op has been increasing its membership and getting the word out since then.

While Kodiak has numerous grocery stores, including Safeway and Cost-Savers, Krueger said that the co-op shop could add value by keeping local money in Kodiak and giving farmers and fishermen the opportunity to sell to community members.

“We want to be able to feature growers,” Krueger said, so that shoppers know the people growing their produce and catching the fish they eat. “We want to have that relationship with the producers and the fishermen.”

According to Kornelis, the planned store would carry 7,000 products instead of the 50,000 products you could get in Safeway.

“Safeway does carry Alaska-grown products, but our focus would be to work with local growers. As opposed to it being an incidental sale, it would be a purposeful relationship with the local growers,” Kornelis said. “The ultimate goal is a full-service grocery store with produce and canned goods and frozen goods and everything you need.”

On Thursday, farmers gathered at Kodiak College for a two-day workshop on farm layout. The workshop was organized by the Kodiak Leadership Archipelago Institute and funded by a U.S. Department of Agriculture 2501 grant, meant to provide funding and assistance to socially disadvantaged farmers. The training, attended by farmers from Kodiak, Larsen Bay, Ouzinkie, and Tyonek, was led by Don McNamara and Donna Rae Faulkner, who own the Oceanside Farms in Homer, Alaska.

“I really see the co-op as a market opportunity for growers throughout the region,” Kornelis said. “Coupling our efforts to increase access to markets through the co-op with giving these farmers technical assistance on how to farm, the business behind farming, and the science behind farming, is incredibly helpful. They’re two solid projects progressing forward.”

One of the participants in the workshop is Dr. Shana Theobald, a Kodiak-based family medicine practitioner. Theobald, who is involved in Kodiak’s Community Farm, said that 80% of cases she sees in the clinic are related to diet. Participants remarked on the nutritional value of locally grown produce, noting that some imported vegetables lose their nutrients during their long journey to Kodiak.

Kodiak farmers contend with limited sunlight during winter months, cold ground temperatures and blistering winds. But for farmers in the island’s remote villages, the motivation to succeed is high. Without local farms, all produce must arrive by plane.

Sam Kenoyer, manager of the tribally owned farm in Larsen Bay, has been involved with the farm since is was established four years ago. His primary goal is to provide fresh produce to residents of Larsen Bay, a village with a population that ranges from 70 in the winter to 250 in the summer, when the cannery and tourist lodges are in full swing. This summer, the farm was able to meet the needs of village residents, and then some.

“Our farm got to the point this year that we actually had some excess,” he said. The Kodiak co-op was happy to take it.

Around 75% of output was sold in Larsen Bay, and 25% went to the Kodiak midweek markets. But with another hoop house planned for the upcoming growing season, Kenoyer said those numbers could flip next summer. The farm plans to sell produce in a small store located in Larsen Bay, but even with the added local sales, Kenoyer said he will have a significant excess to send to Kodiak.

“The farmers market in town is going to be a huge asset for us,” he said. “I can grow way more than the community needs.”

Marilyn Henson, a Larsen Bay tribal administrator, said that this summer, sales from the farm were a little under $1,000. All revenue goes back into the agriculture fund, to purchase materials and labor.

Kenoyer expects to grow at least double the amount of vegetables next summer, with plans to continue increasing output as long as there is demand.

In the meantime, the co-op intends to continue growing membership, even after the 500-member goal is reached.

“Reaching that threshold of 500 gives us validation to start developing our capital campaign,” Kornelis said. The estimated cost of the grocery store project will be $2 million. “So that’s going to require loan financing, potentially grant funding and a member capital campaign — asking those that have bought a membership to invest further in the project through low-interest loans for the building of the grocery store.”

Co-op membership costs $150 and can be paid in installments. Membership also comes with the right to vote for board members and hold an elected board position. Once the store opens, co-op owners will receive a portion of the co-op’s profit annually in the form of patronage dividend rebates.

The Kodiak co-op is following a model set out by the Fairbanks Co-op Market, the only retail food cooperative in Alaska, which has more than 3,900 invested owners, according to its website.

“Their model is very appealing,” Kornelis said. In a 6,000 square foot store, they focus on selling Alaska-grown produce. “They have all the different products that you could find in a traditional grocery store, just a smaller selection. It’s very appealing.”

Kornelis hopes a brick-and-mortar store will exist in Kodiak within less than two years.

“I’d like it to go faster,” he said. For now, the weekly produce stand during the summer months gives him something to look forward to. “It was a fun event. You could see your neighbors there and have access to really good produce.”

Sam Kenover is an extremely talented craftsmen and hands on guy. He will do an outstanding job with this co-op. Good luck Sam - Henry Moore

Boyfriend arrested on murder charge in death of Kristen Huntington

The lawsuit is one in a series of cases surrounding the sulfolane contamination, the state Flint Hills Resources and Williams Alaska Petroleum.

“The University of Alaska is fortunate to have such a strong and supportive congressional delegation. They understand the full nature of our mission, our educational impact in the state and the significant scientific contributions we’re making at the national level,” Johnsen said.