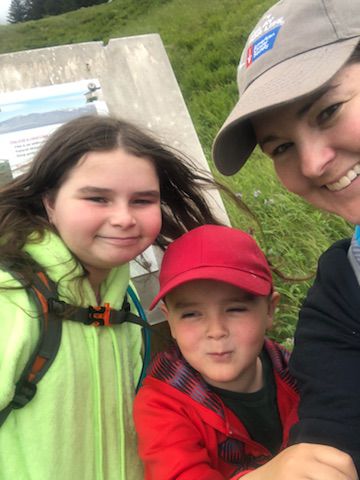 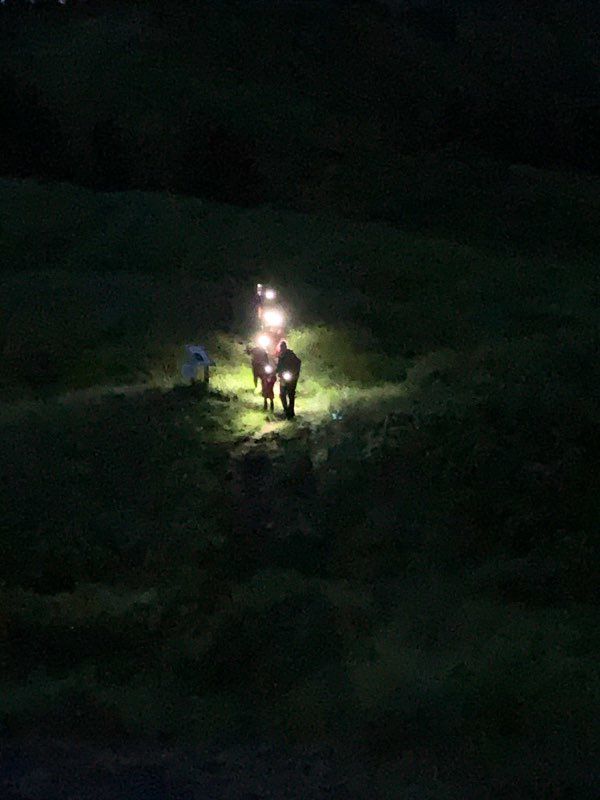 The Nugents get guided down Pyramid Mountain by Steve and Sharon Wielebski on Monday morning.

The Nugents get guided down Pyramid Mountain by Steve and Sharon Wielebski on Monday morning.

This past week, Sarah Nugent remained in the confines of her kitchen — a place she knows well and won’t get lost walking from the refrigerator to the oven — baking banana bread and scones.

“The last couple of days have been culinary adventures,” the Kodiak High School teacher laughed.

Nugent has a worthy reason for laying low. Her and her two young kids — Autumn and Kai — spent hours in the rain and wind on Pyramid Mountain searching for a way down. They were eventually escorted down the 2,395-foot peak that overlooks Buskin Lake by Kodiak Island Search and Rescue.

Typically, the 2.6-mile hike with an elevation gain of 1,804 feet takes 3 hours. The Nugents’ adventure lasted 10 hours. They started the trek at 4 p.m. Sunday and returned to the parking lot on Anton Larsen Bay Road at 1 a.m. Monday.

“It was a scary ordeal, to say the least,” Nugent said. “But I was super proud of my kiddos and their bravery and resilience — it’s not easy being lost and feeling hopeless.”

The Nugents ended up on the mountain because it was Father’s Day, and the kids’ father, Monte, loved being in the outdoors before dying in 2018. The trail up Pyramid was one of Monte’s favorite Kodiak hikes. Pyramid also happened to be one of the two hikes on KANA’s Explore the Rock calendar last week — a program that Autumn started in June.

After taking a Father’s Day card, cake and present to Monte’s dad, the three Nugents set off to scale Pyramid. Sarah — a Kodiak girl — had been to the summit of Pyramid several times. This would be the maiden voyage up Pyramid for 10-year-old Autumn and 5-year-old Kai. The two kids had started slow this hiking season, touring flat trails around the island, like Spruce Cape, Fort Abercrombie State Historical Park and Swampy Acres.

They packed backpacks with water, snacks and a small flashlight — essential items that they ended up using.

Going up was easy. The Nugents made friends with another family, and Autumn found an Explore the Rock painted rock, which she kept the entire time. The weather started to turn near the top — wind, rain and fog. Before reaching the summit, the deteriorating conditions forced the Nugents to reverse course.

That is when the “real” adventure started. A lack of a distinct path — they were on the rocky part of the trail — and low visibility was a bad combination.

“Because it was so foggy, windy and rainy up there, that is how we got turned around and off the actual trail,” Nugent said.

To compound the situation, they encountered a male bear off in the distance. To avoid the beast, the three went even farther off the trail, swimming through thick grass and alders. The bear and the path were both out of sight.

After failing to reacquaint with the main trail, the family sought shelter from the weather in a cleared bowl. In an area with no cell service, Sarah couldn’t access the GPS on her phone, so Autumn blew a whistle attached to her backpack, while the other two shouted for help. They all had bright-colored shirts on.

With no sign of people and the sun setting, Sarah anticipated spending a night on the mountain. She went over different rescue scenarios with her kids and sang.

“I was giving them that positive hope — to keep that focus of we are going to get rescued, I just didn’t know how,” Sarah said.

That same evening, Steve and Sharon Wielebski — both members of Kodiak Island Search and Rescue — were on Pyramid, a mountain the couple hikes and skis often.

After having dinner at the summit, the two descended the mountain, and when arriving at the bottom, noticed a car in the parking lot — that was the first sign that something was wrong.

The second sign of trouble came a few minutes later when the family that the Nugents had met on the mountain returned to the parking lot looking for their new friends. A relative of the Nugents also arrived at the scene and gave Sarah’s phone number to the Wielebskis, who proceeded to drive to Bear Valley Golf Course, where they called Sarah’s phone. With no answer, the two realized she was lost on the mountain.

They called their search and rescue buddies and alerted Coast Guard security of the situation before returning to the mountain.

Based on experience, Steve figured the Nugents wandered to the north side of the mountain. They searched for two hours.

“We looked at where we thought she was and started yelling,” Steve said. “We almost started walking into another area to go search, when I turned around and yelled one more time. All of a sudden, we could hear little voices screaming.”

The Wielebskis located the Nugents about a mile off the main trail. Wearing headlamps, Sharon and Steve guided the Nugents back onto the path and were in the parking lot by 1 a.m., where other members of the search and rescue group were waiting.

“Being grandparents, we were real happy,” Steve said. “Her kids were real troopers. They were in good spirits, and glad they were going home.”

Steve couldn’t remember the last time KISAR — a nonprofit organization with about 20 members — performed a rescue on the island. The group meets once a month to train. He said this search was unique because he was already on the scene instead of getting a call from the Alaska State Troopers.

“It was good practice for all of us to go up — it makes people feel good,” said Steve, the president of KISAR.

Sarah was appreciative of KISAR.

“It all ended positively,” she said. “We are all safe, warm and happy. We are thankful that we live where we live — that we have those services available.”

Sarah was terrified that getting lost would traumatize her kids, but the next day, Kai was eager to explore, asking what trail was next.

“We probably won’t be doing any mountain hikes,” Sarah said. “This week on Explore the Rock is North Sister, and I think that is one that we are going to pass on.”

With hiking season upon us, Kodiak Island Search and Rescue president Steve Wielebski suggested several items to put in your backpack.

He also recommended downloading the Gaia GPS: Hiking, Offroad Maps app. Download the map before hiking and, even if you don’t have cell service, the app acts like a GPS.

“If it shows you that you are lost, it will work just like a GPS,” he said.

The best advice: “You should always go back to the last place you weren’t lost at, which is a hard decision to make,” he said. “Just don’t keep wandering in the wrong direction.”