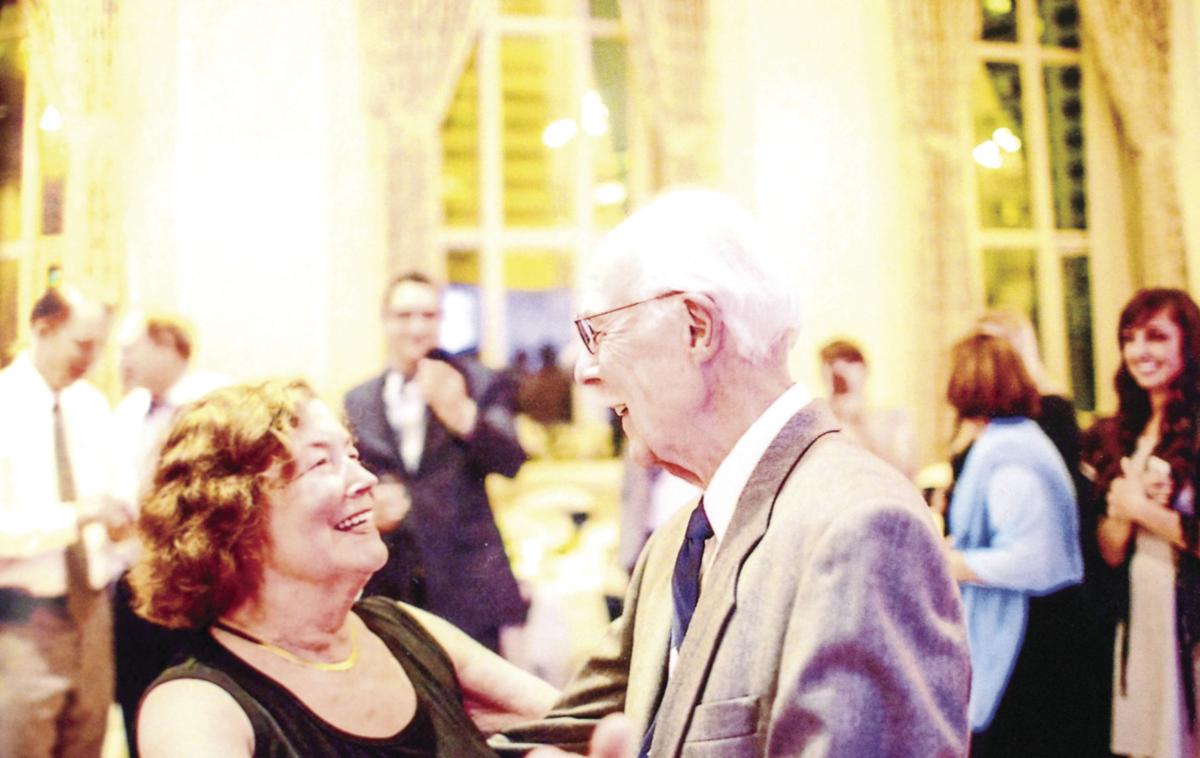 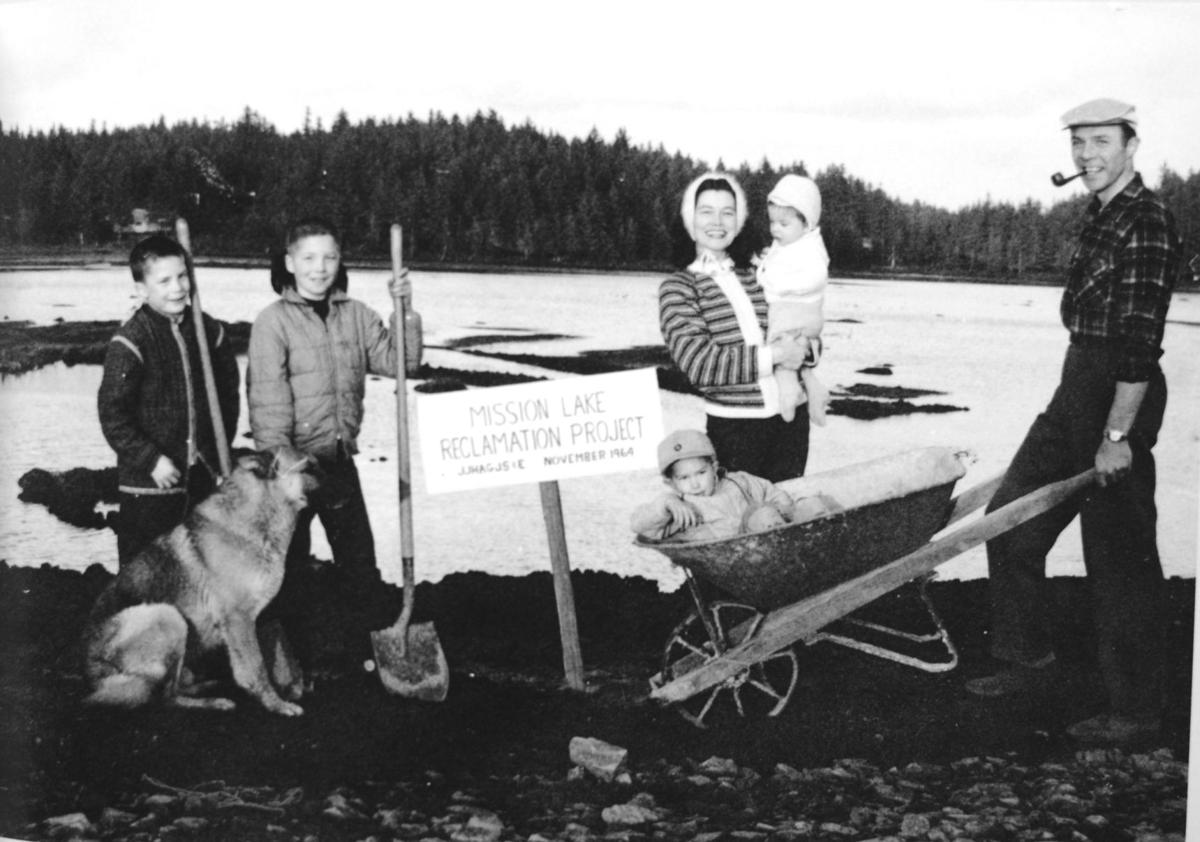 The Johnson family repairing a road in Kodiak after the 1964 tsunami. 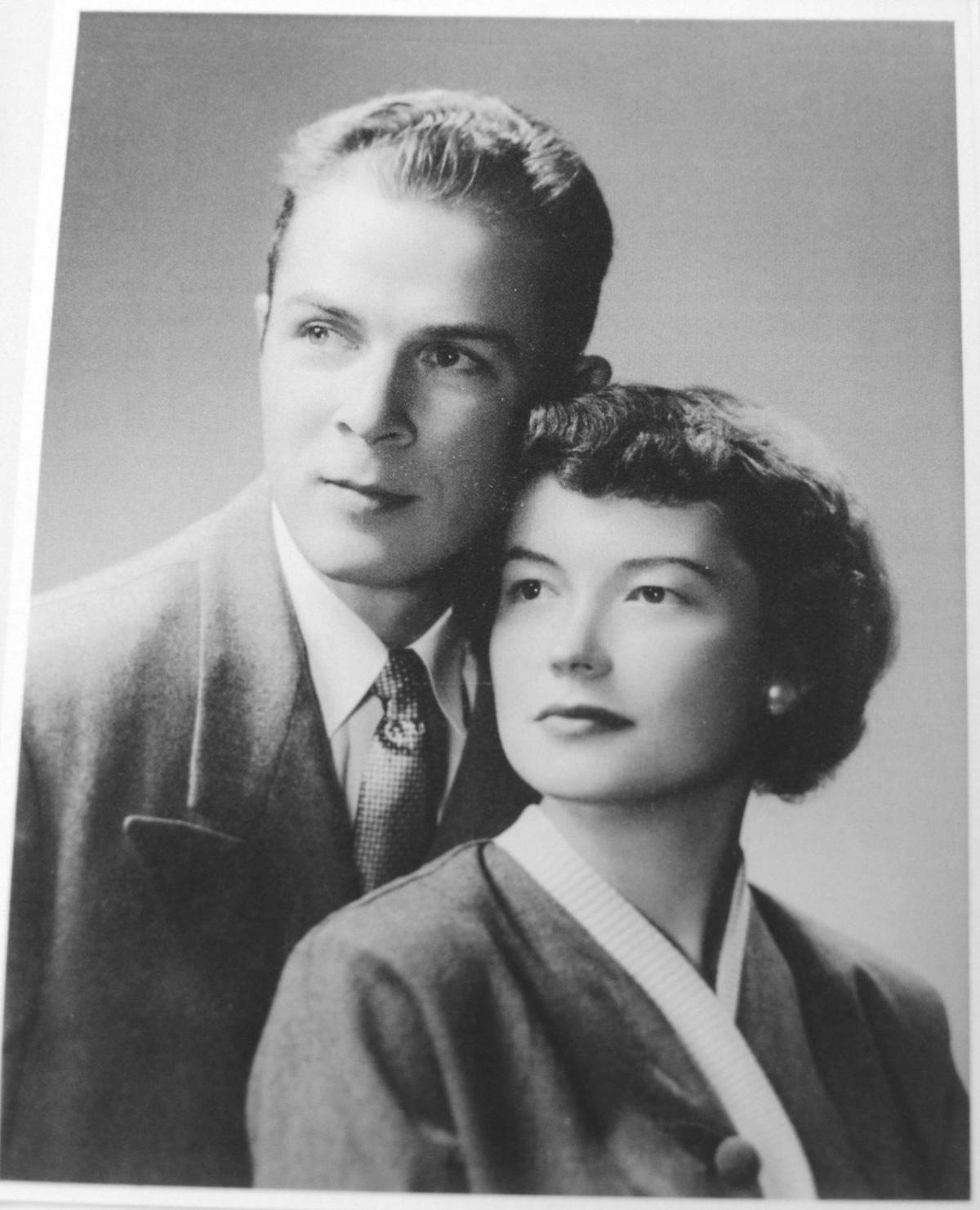 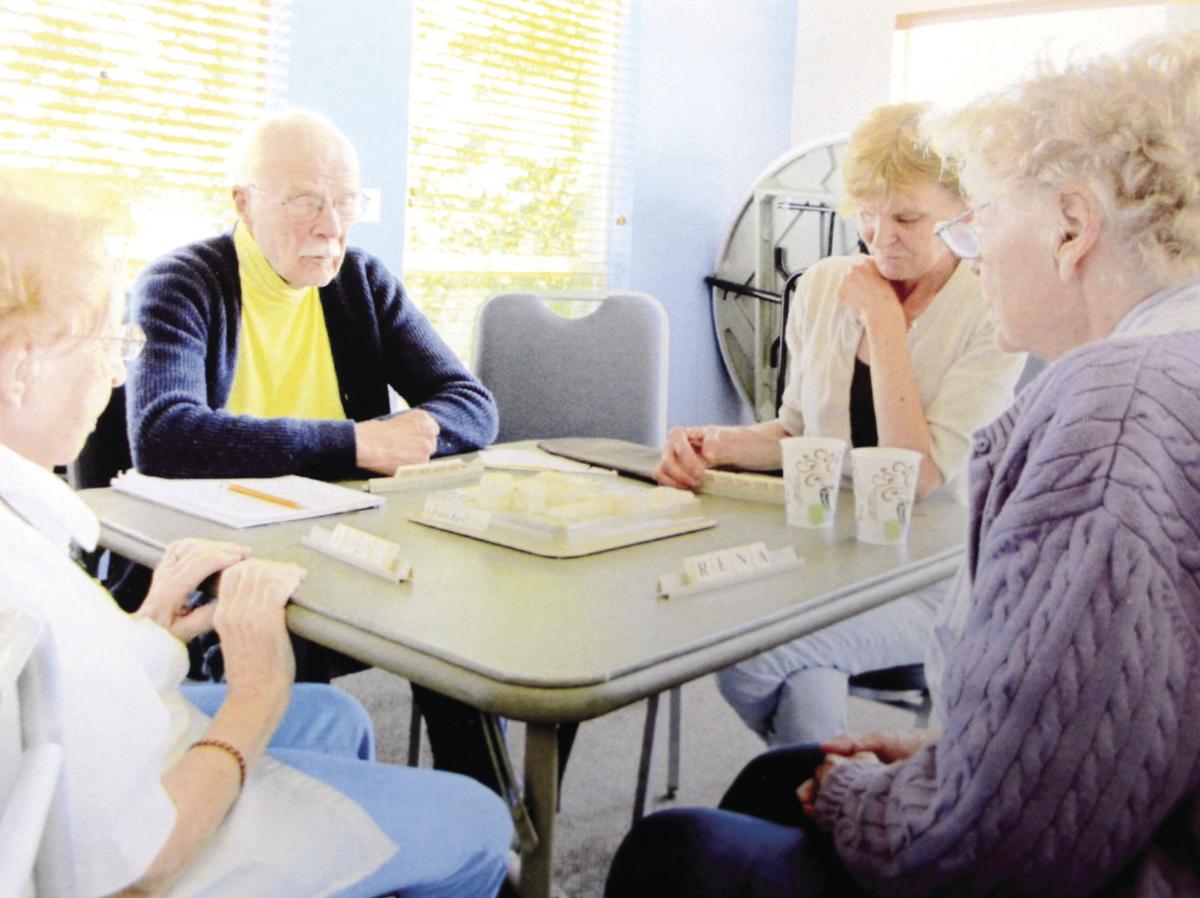 The Johnson family repairing a road in Kodiak after the 1964 tsunami.

Robert Holmes Johnson, known locally as Dr. Bob, dedicated his life to Kodiak as the island’s second doctor while seeking to improve the lives of its residents through art and nonprofit organizations.

After decades of calling Kodiak home, Johnson died peacefully at his residence in Bayview Terrace on Jan. 31. He was 94 years old.

According to his loved ones, Johnson not only was passionate about curing ailments and saving lives as a physician, but he also worked hard to make Kodiak a better place to live.

For Johnson, improving the quality of life meant art. He helped found the Kodiak Arts Council, spearheaded the creation of the Gerald C. Wilson Auditorium and organized numerous events throughout the years to bring the community together.

“He was instrumental in getting the Kodiak Arts Council going,” said Ginny Shank, who served for many years on the council’s board. “He was a believer … He didn’t give up, ever.”

Johnson helped organize the council and hired Gerald Wilson, whom the Gerald C. Wilson Auditorium is named after, as the nonprofit’s first executive director.

Johnson “provided a lot of leadership (and) energy to keep it going as well as fundraising. He loved performing and was involved in many of the stage productions that the Arts Council did,” Shank said.

“Dad was Kodiak,” said Craig Johnson, the eldest of the doctor’s four sons. “He had a mission in life: to serve Kodiak.”

According to Craig, Johnson supported any organization that made Kodiak a better place to live, such as the Rotary Club and the Chamber of Commerce.

Johnson was born on December 25, 1925, in St. Helens, Oregon, to Dr. Arthur Holmes and Fostina Johnson. The family moved to Kodiak when Johnson was 12 years old.

This was due to the seemingly endless opportunities provided by the construction of the Navy base, the Kodiak State Airport, Fort Abercrombie and roads out to Chinak. Kodiak transformed from a sleepy fishing village to a vibrant, booming town.

In 1942, he was one of the 11 graduating students at Kodiak High School.

Following graduation, Johnson studied at Willamette University in Salem, Oregon, but dropped out a year later because of World War II. He subsequently joined the Merchant Marines, graduating from the U.S. Merchant Marines Academy in Kings Point, Long Island, New York. Johnson became a cadet on supply ships, transporting troops and supplies for the duration of the war.

After the war, he returned to Willamette University, graduating in 1947. Afterward, he graduated medical school at the University of Washington and completed his residency at the Methodist Hospital in Brooklyn, New York.

Johnson paid his way through college by playing jazz piano. He was an avid musician and singer. He also wrote his own music.

Because of this passion, and to the dismay of his parents, Johnson almost failed out of school. Although he did eventually graduate, his interest in music never ceased.

During Johnson’s time at university, he met Marian James, the woman he would later marry.

“Here was this tall, thin guy, who was interesting. He played piano,” Marian said about her future husband. In the summer of 1952, Johnson invited the 19-year-old Marian to sail to Kodiak with him and his parents on the Windbird, a 38-foot ketch sailboat.

They spent six weeks traveling to Kodiak, and later that year they were married.

In 1955, the young couple moved to Kodiak, and Johnson began working at his father’s practice.

When they arrived, Marian and Johnson moved into a log cabin that had been built in the 1930s and that was insulated with newspaper, Marian said.

After the birth of their third child, they decided to upgrade their home and had a two-story house built at Sprucehaven near the log cabin that exists to this day.

Craig said growing up under the guidance of his father was fun. Johnson was adventurous and active, and loved games and sports like ping pong, skiing and sailing. He put a pull table, trapeze and swing in their living room, Craig said.

With Johnson’s house only steps from Mission Beach, Johnson would often brave Alaska’s cold waters and swim in the ocean early in the morning.

In 1964, several months after the death of his father, a 9.2 earthquake and tidal wave hit Kodiak, changing the city’s landscape forever.

“After the earthquake of 1964, fishing accelerated. There were several kinds of crab, halibut, shrimp and other fish. It was a very busy market and people could have jobs,” Marian said, adding that the town also hosted numerous churches and bars.

“It was a very vibrant community,” she said.

For the next 10 years, Johnson was the only doctor in town.

“Dad was stretched way too thin. Other doctors didn’t really want to move here back then,” Craig said.

During the day, Johnson delivered babies, treated alcohol and drug addiction, saw outpatients  and cured other ailments; at night, he worked to bring art and culture to Kodiak.

Johnson first introduced the historical drama “Cry of the Wild Ram” to Kodiak, adapted from the book by Frank Brink. The book tells the story of the Russian arrival to Kodiak. For 25 years, the play performed at Fort Abercrombie, bringing volunteer actors from near and far to perform.

Inspired by the theater, the Kodiak Arts Council was born, bringing quality art performances to Kodiak.

“He enjoyed bringing things like that to the community, making them happen onstage,” Shank said of Johnson.

He also hosted smaller gatherings to bring the community together.

Some of the events included Beyond the Pale, at which community members could philosophize about the world; and the Kodiak Multicultural Forum, which gathered people from different backgrounds to meet and get to know each other, said longtime friend Nancy Kemp.

However, his passion stretched far beyond art.

“It’s not just the arts,” Shank said about his impact on the community. “He was not afraid to get up in front of people and present his idea and look for ways to accomplish them.”

According to Marian, Johnson was always enthusiastic about any new venture or club.

“He was always full of energy,” Marian said. “He never minded chores, and he loved people,” she said.

Her late husband was active in the Rotary Club for decades and would not miss a meeting, even when he was ill, she said.

From the outpouring of anecdotes, stories and kind words describing Johnson, one thing is clear: He dedicated his life to the town, its people and its future.

After retirement, Johnson, continuing to he worked part-time into his 70s. Towards the end of his life he lived in Bayview Terrace and loved to play Scrabble at the Senior Center. He was an avid reader and writer, as well as a talented musician, poet and philosopher.

Johnson is survived by his wife Marian; his four sons, Craig, Gary, Jimmy and David; and eight grandchildren.

A memorial service will be held at 2 p.m. on March 15 at the Elks Lodge

I used to help Mrs. A. Homes Johnson, when I was growing up at the Kodiak Baptist Mission, in the summer months in her big garden. It was quite a chore, I remember. Being that I never seen a garden in my life in Chignik. That was in the winter of1954, which I looked forward to each year, when I had to help Mrs. Johnson in her garden. Dr. A. Holmes Johnson would take me on his sailing boat for rides, I will never forget that glass skiff he had. Then Dr. Bob would hire me when I got older to clean his Doctors Office by the old USO Building, Later the Sears Roebuck Store. I also cleaned that store too, for Mrs. Suitor. (sic) In the winter of 1955 or so, I was showing off on ice skates on Mission Lake on night and fell on my hand and broke my ring finger on my right hand, the bone when sticking out and I was one of Dr. Bobs first patients for he was with his Dad at the Griffin Memorial Hospital. I went running down the hill from the Mission one morning , when Dr. A. Homes Johnson hit that telephone pole with his super cub float plane. He didn't get hurt. but the plane had a big imprint of that pole on his wing. I spun him around 180 degrees from where he was coming from. I never seen that plane again. Dr. Bob was sure a kind and caring person. Thank You Dr. Bob & your parents for the memories. Roger Ivar Wallin

House Bill 300 seeks to break down the annual 5.25% of market value draw in the permanent fund earnings reserve into a series of percentage allocations to different funding sources for the state.

Another major bank comes out against ANWR development

The largest bank in the United States announced this week it will not fund oil exploration or development in Alaska's Arctic National Wildlife Refuge, sparking criticism from Alaska's congressional members and oil industry and celebration from a collection of state environmental groups.

On Tuesday, a collection of buildings at Fort Wainwright that are used as a “mock village” for training had been converted into a town center for a search and extraction scenario.