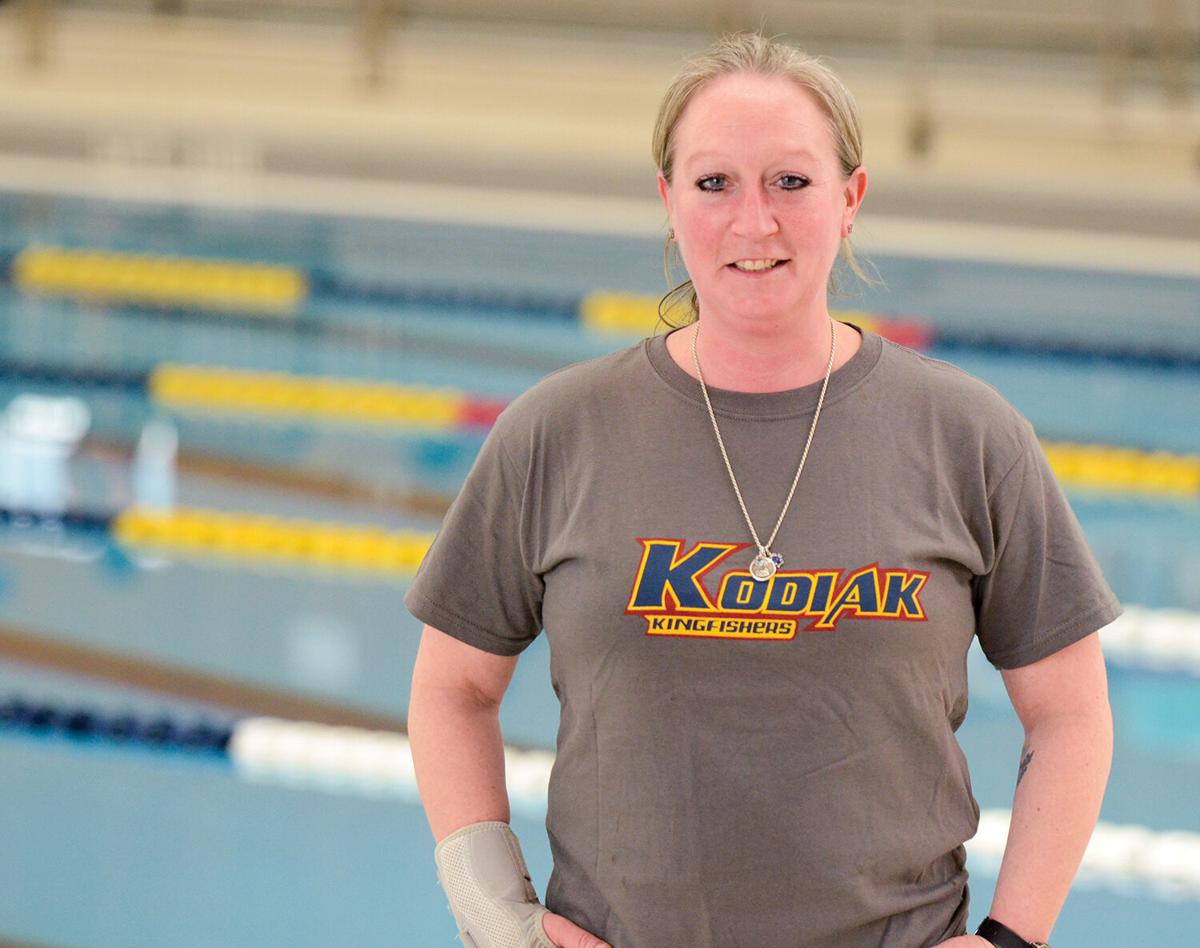 Tianna Fraser is a coach with the Kodiak Kingfishers swim club. 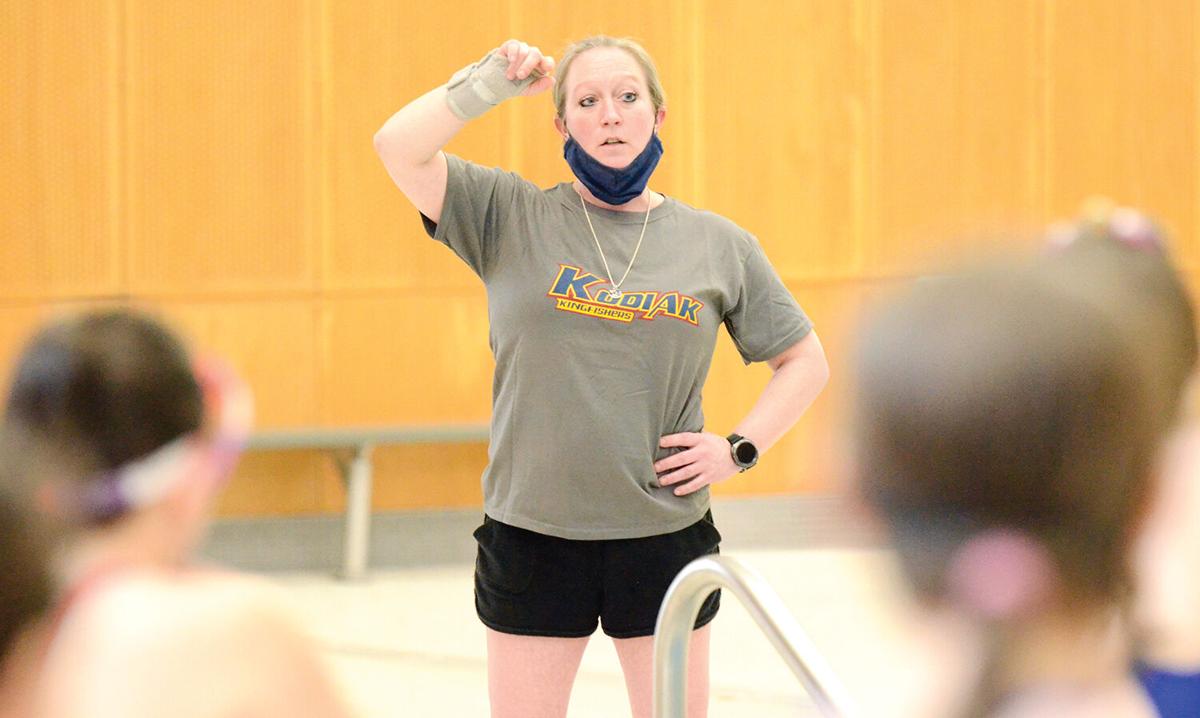 Tianna Fraser is a coach with the Kodiak Kingfishers swim club.

“Do you know my name?” a swim coach asked a group of youths on a recent February morning at the Kodiak Community Swimming Pool.

Half the swimmers were mesmerized by fluffy snowflakes falling outside and didn’t respond, a few were lost in their thoughts about the candy they had gathered from an earlier game, while the rest shot their arms up and yelled in unison, “Tianna.”

The coach — not much taller than her athletes and nearly lost in a sea of swim caps — flashed a smile and a thumbs-up in approval. The group of beginning-level swimmers knew their coach’s name, but what they didn’t know was that she was Kodiak High’s first female swimming star.

More than two decades ago, Tianna Wood — Fraser now — moved from Reno, Nevada, to The Rock with her family and rewrote the school’s record book. By the time she graduated from Kodiak High School in 1997, she owned 10 school records and won the girls program’s first Region III title. And it’s not like the program just started. It had been around since 1976.

“It was Tianna up and down the board,” said former Kodiak High swim coach John Lindquist. “I just started telling my girls that we need to start chopping some Wood. That was our motivation to go after those times — that is what records are for.”

When Lindquist retired in 2017, after 17 years of coaching, Wood’s name had been completely erased from the record board that is prominently displayed inside the Kodiak Community Swimming Pool. Stars like Jori Lindquist, Tahna Lindquist, Ila Hughes, Laura Griffing, Celeste Beck-Goodell and Marina Cummisky now pepper the sign.

When Fraser met John Lindquist for the first time nearly a decade ago, she wasn’t aware of the program’s recent success — six NCAA Division I swimmers and three state title teams since 2008 — or that he used her as a motivational tool. After years of competitive swimming, she burned out. She lasted two months as a walk-on to the Iowa State University swim team before returning to Kodiak. It took her 17 years to discover a passion for the sport again.

At 41, she spends less time in the water, but when she does go for a spin, the stroke that won her so many high school races is still noticeable. Instead, she has been teaching that stroke — at an extremely basic level — to elementary-aged swimmers since 2014 as an assistant for the Kodiak Kingfishers swim club. For many swimmers, she is their first coach.

“She is the perfect coach for our younger swimmers,” Kodiak Kingfishers head coach Maggie Rocheleau said. “She isn’t overbearing and does a really good job of allowing kids to learn by doing. She has a great command of the sport and a great history.”

Youth coaches don’t often get the credit they deserve. But they are the ones tasked with making practices fun so athletes stick with the sport. Those athletes eventually turn into teenagers and get handed over to high school coaches, but without youth coaches embedding fundamentals and technique those prep programs wouldn’t thrive.

Fraser is the ultimate youth coach, dedicating the past eight years of her life to the program she started swimming with at 13. And she does so without any media recognition.

“I fell in love with the idea of molding these kids into excellent swimmers,” Fraser said. “I see their stroke improve on a daily basis, and I see their smiles when we play games. ... It is very rewarding.”

Fraser began swimming competitively at the age of 6 and, with a mom who taught swim lessons and managed pools, was always on a pool deck. Her mom was her first coach.

“My whole life was at the pool. I loved swimming, every aspect of it,” she said. “I took everybody’s advice — different coaches from across the state would give me advice — and it all stuck with me. I’m still giving it to these kids.”

She broke her first school record as a freshman in 1993 and continued to lower marks until her senior year. As a senior, she became the first Kodiak girl to win a Region III title by taking the 200-yard freestyle with a time of 2:04.27. A week later, she placed seventh in the 200 and 500 freestyles at the state meet — her places could have been better had she not jammed a finger on a turn during a preliminary race.

She was also one of the first swimmers from Kodiak to qualify for a Western Zone Age Group Championship meet.

At the time, she didn’t realize the significance of her accolades. She just thought what she was doing was normal, and everybody was accomplishing the same thing.

“I never had a big ego. I didn’t know I was the first person to take regions until John Lindquist told me that, and I didn’t even know John until 2014,” said Fraser, who loathed when the Kodiak Daily Mirror sports reporter would interview her in high school.

She cherishes those newspaper clippings.

“It is pretty impressive now that I look back at it. But I probably made a lot of people mad because I just moved here and took over,” she said. “I didn’t have very many friends — except for my swimming friends — because I was so shy.”

Coaching helped her come out of her shell. She barely talked when she started. Now she commands the pool deck and creates games — like racing cars on the bottom of the pool or racing while sitting on a kickboard — for practice.

“(She has) super positive energy and is really patient with really squirrely kids in the water … our girls loved having coach Tianna. She keeps swimming fun for kids and that is what is important, especially at that young age,” Kingfishers coach Lindsey Glenn said. “She is super essential to the program.”

“She doesn’t necessarily want the spotlight — she is such a modest person — but she is such a huge piece of what makes our program work,” Rocheleau said. “The time, the effort, her availability and her connection to the kids — she connects with them, and they connect with the sport through her.”

Fraser’s youngest daughter — now 14 — showed interest in swimming when she was in the second grade. That is what brought Fraser back into the sport. She joined as a Puffin coach and, even though her daughter switched to dance two years later, remained part of the program. The kids have kept her going.

“I could be at home all lazy and depressed and not want to go to work. The second I come here and see them, it makes it worthwhile,” Fraser said.

Recently, Fraser compiled all her high school times and gave them to Rocheleau to add to the school’s top 10 list that John Lindquist started before retiring. The top 10 list is displayed in a window at the community pool.

“I could show them (the younger swimmers) and maybe even give the older kids a goal to beat coach Tianna’s time,” she said.

Family of Michael Bradner recalls his service to the state, love of Interior Alaska

Bradner came to Fairbanks in 1956 to work on the Yutana Barge lines and kept working on boats for many years. Heidi said that after those trips, he would always speak about how much he cared about the communities along the rivers.

They're using online posts to contact families and demand a ransom. It's all a scam, state troopers say.