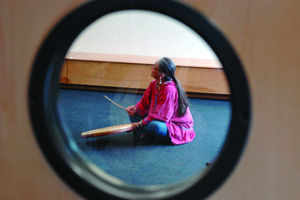 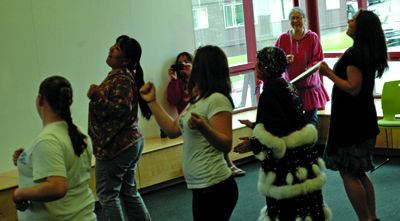 Theresa John (background) smiles as she keeps the beat on an Alutiiq drum for workshop participants. (James Brooks photo) 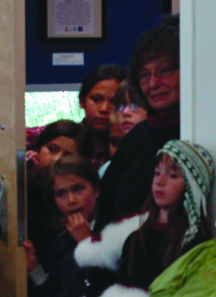 Children crowd the doorway of the multipurpose room at the Kodiak Wildlife Refuge Visitor Center as they try to catch a glimpse of the new Alutiiq dances being performed Thursday. 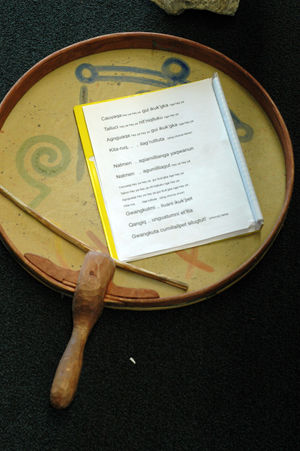 Theresa John (background) smiles as she keeps the beat on an Alutiiq drum for workshop participants. (James Brooks photo)

Children crowd the doorway of the multipurpose room at the Kodiak Wildlife Refuge Visitor Center as they try to catch a glimpse of the new Alutiiq dances being performed Thursday.

For three days this week, about 20 men and women have embarked on a unique effort: drafting new Alutiiq dances. They’re trying to repair more than two centuries of neglect caused by missionaries who forbade Native dancing and others who simply thought it had no place in the modern world.

Thirty years ago, the Kodiak Area Native Association began to revive Aleutiiq dance on Kodiak Island, and groups sprang up in villages across the island. But dancers usually relied on preserved songs and dances. The art of writing new ones had been lost.

As interest grew in preserving the Alutiiq language, people began asking how to preserve other aspects of

“With the linguistic and cultural revival happening on Kodiak right now, there is a need for accessible information on older or more subtle aspects of culture, including traditional dance,” Alutiiq Museum language manager April Laktonen Counceller said.

But with few historical records available, dancers had to look off Kodiak Island for help. They turned to Central Yup’ik professional dancer and UAF professor Theresa John.

“We wanted to have Alutiiq dancers learn about the history of dance in other cultures that have preserved it better,” Counceller said.

“The Yup’ik language is the closest to ours, so most of our Elders can understand … maybe 80 percent of what they say,” she said. “We share a lot of cultural and historical characteristics. Some people even consider the Alutiiq culture to be the next culture in the spectrum of Yup’ik cultures and languages.”

At the workshop that began Tuesday in the Koniag building on Near Island, participants heard from John and her sister, Agatha John-Sheilds, who spent the first day explaining the cycle of dance performances throughout the year and the way drumming, gestures and lyrics work together.

“Dancing is a method of storytelling to pass on heritage,” John said.

In the second day of the workshop, attendees broke into small groups to write songs matching Yup’ik gestures with Alutiiq lyrics. Alutiiq Elders were on hand to translate lyrics.

“This is the first time we’ve brought Elders and young people together,” John said. “This is a very unique thing.”

In one small group, Allison Anderson of Larsen Bay, Brandy Boskofsky of Ouzinkie and Desiree Cronin-Tallman of Anchorage joined Counceller, who came to the workshop with a melody and lyrics but needed help to tie gestures into the song and create a dance.

As the group rehearsed the dance’s movements, John gave advice while drumming: “Open up your arms so they can see your arms are happy. ... You want your audience to understand.”

As they moved in time with the drumbeat, a video camera recorded in the background. Each participant will take home a recording of the workshop, a how-to manual for anyone interested in writing songs of their own.

Participants agreed that teaching the next generation is just as important as learning it themselves.

“I think there’s kids that want to do it, but I think there’s few opportunities for them,” Cronin-Tallman said. “I have to learn this as an adult to pass this to my kids.”

On the final day of the workshop, almost 50 people gathered in the Kodiak National Wildlife Refuge Visitors Center to see new Alutiiq dances for the first time in decades.

Some dancers wore traditional clothing, while others wore T-shirt, jeans and sneakers. That was OK with John, who said, “This is about telling new stories, not just old (ones).”

After each small group presented its dance, John and John-Sheilds called Elder Florence Pestrikoff forward, and they presented a dance telling Pestrikoff’s memories of the great 1964 earthquake and tsunami.

“I could tell the story or write it down; now they can hear the song and read the story in gestures,” Pestrikoff said.