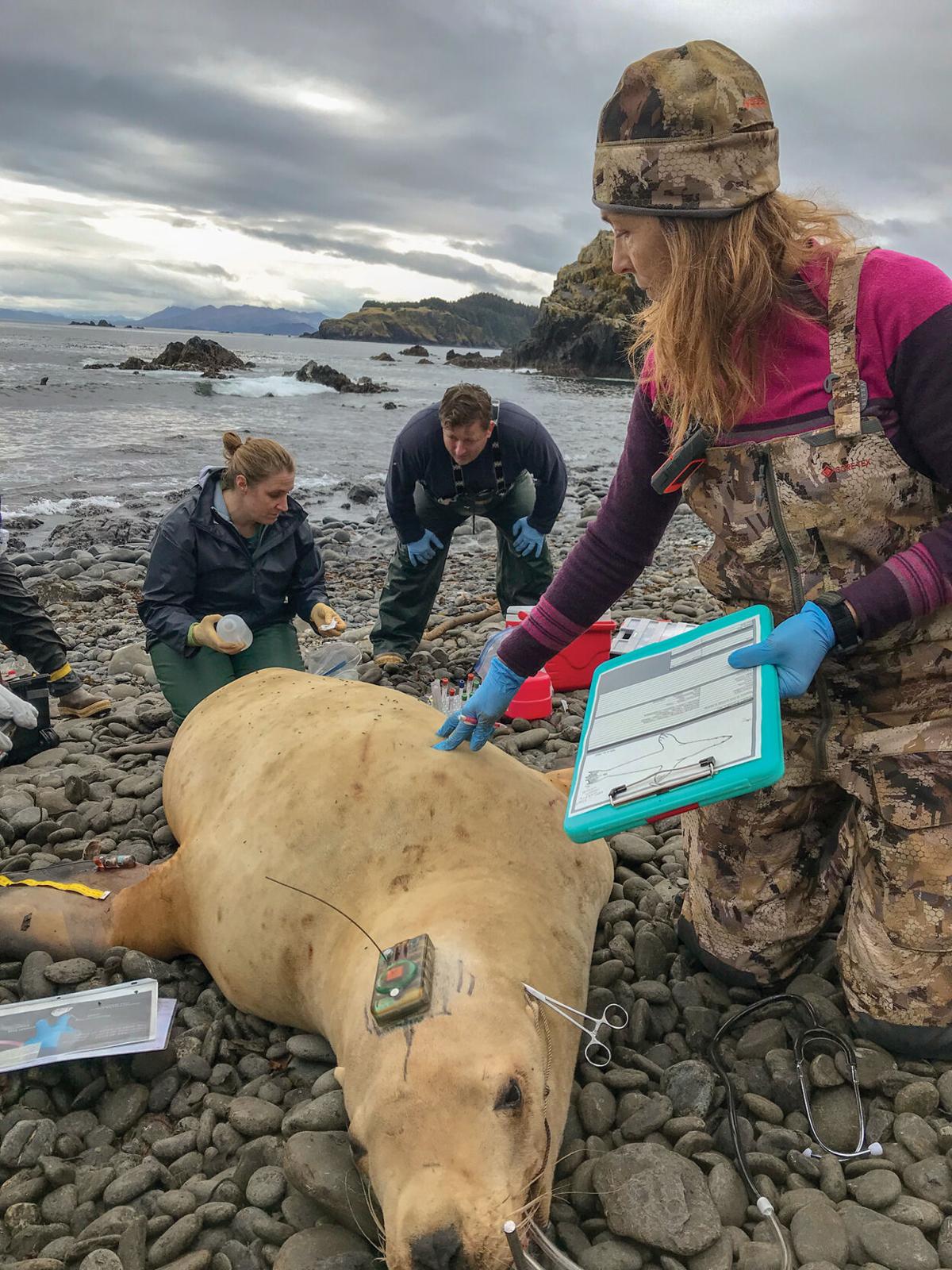 Michelle Oakley performs a physical examination to assess a sea lion's condition, making note of anything unusual. Forceps clipped to the ear help hold the endotracheal tube for anesthesia in place. The GPS tag is epoxied to the sea lion’s head. 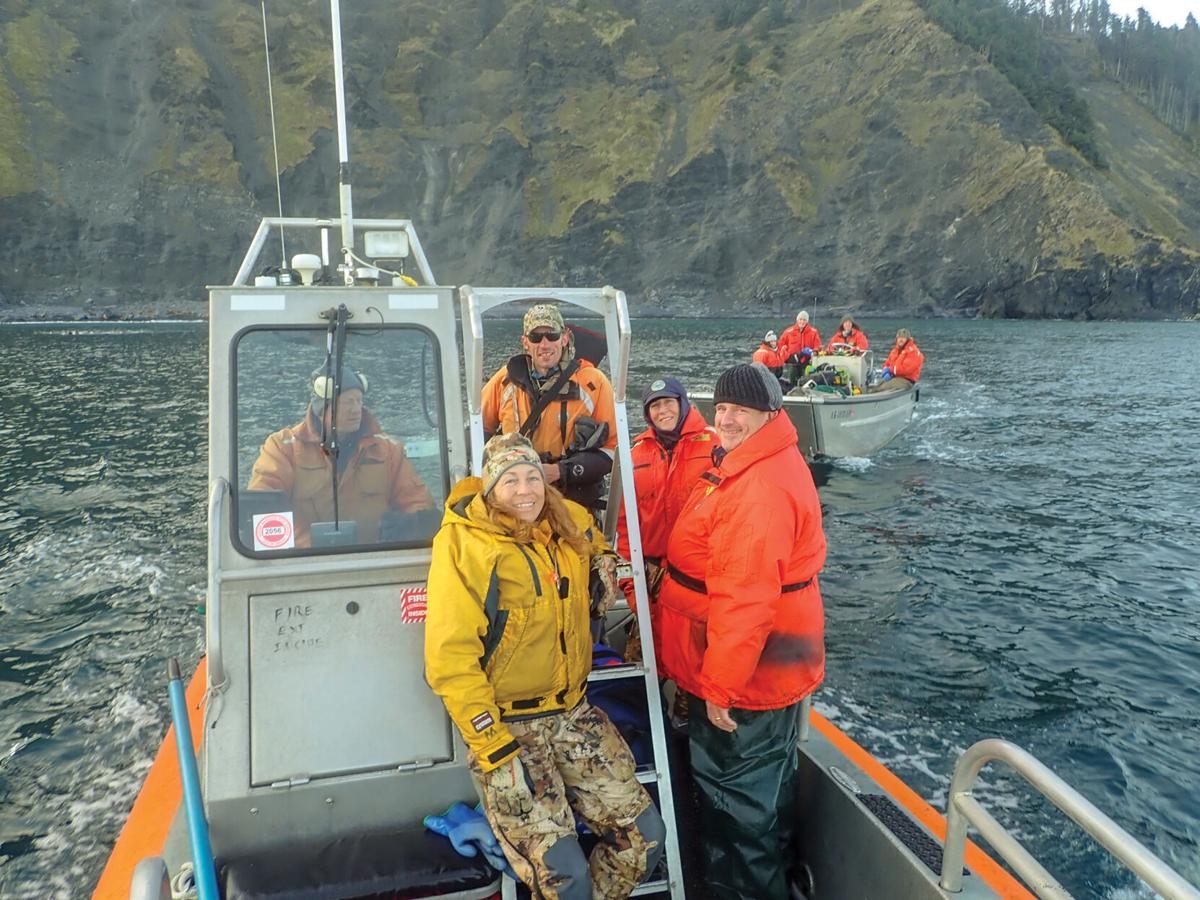 Michelle Oakley performs a physical examination to assess a sea lion's condition, making note of anything unusual. Forceps clipped to the ear help hold the endotracheal tube for anesthesia in place. The GPS tag is epoxied to the sea lion’s head.

For the first time in nearly 30 years, research conducted with updated technology has revealed new information about Steller sea lion habits, including where they travel when they forage for food.

The information was gathered from electronic tags placed on the animals during an October 2019 research trip conducted in areas around Kodiak, including Long Island, Marmot Island, Sea Otter Rock near Afognak Island, and Flat Island near the Kenai Peninsula.

Researchers tagged seven female sea lions, five of which were pregnant, by gluing satellite tracking devices to the fur on their heads. The devices fall off when they molt. The sea lions were also equipped with flipper-mounted tracking tags.

While the head tags have since fallen off, six of the seven flipper-mounted tags are still online, according to an article written earlier this month by Riley Woodford, a public information officer with the Alaska Department of Fish and Game.

After months of tracking the animals, researchers found that each individual female was traveling to the same places year after year. Some females dove closer to shore, while others took multiday trips to their feeding grounds to eat bottom-dwelling fish.

“They are really surprisingly persistent for the better part of seven months,” said Mike Rehberg, a wildlife biologist with the Alaska Department of Fish and Game. “They are not going all over. They are concentrating their effort when they know there is a pay off.”

One female made foraging trips to almost the exact same spot every year, traveling 200 miles round trip from Kodiak. Some of the sea lions were diving from as deep as 430 meters (1,410 feet) to feed.

The 13-day research trip was funded by a National Oceanic and Atmospheric Administration Species Recovery Grant to ADF&G. Rehberg and his team sailed on a charter boat from Homer to Kodiak to conduct the research.

In recent years, conservation efforts have focused on the declining populations of Steller sea lions on the Aleutian Chain rather than on Kodiak Island.

According to NOAA, unexplained widespread population declines of Steller sea lions in Alaska led to the animals being added to the Endangered Species Act in 1990.

Since then, Steller sea lion populations around Kodiak have been slowly increasing, but not enough to remove them from the endangered species list.

“We haven't really taken a close look around Kodiak since the early 1990s,” Rehberg said. “One purpose of this project is to track where sea lions are using their habitat and see how that compares with the critical (habitat) that was established (between) 20 and 30 years ago.”

Rehberg and his team found that sea lions were traveling many miles beyond the areas designated as critical habitats, or protected areas. For Kodiak’s sea lions, this includes a 20-nautical-mile buffer around all major haulouts and rookeries, in addition to three large offshore foraging areas near Shelikof Strait, Bogoslof and Seguam Pass.

Haulouts are land masses where animals go to rest, while rookeries are used for breeding. Both typically consist of beaches, ledges and rocky reefs.

When scientists tracked female Steller sea lions in the 1990s, they used much older technology.

“We didn't get a sense of the breadth of the habitat they were using,” Rehberg said.

With advances in technology, Rehberg said the research team could finally confirm what they always suspected.

“Sea lions go for the food that happens to be abundant when it's abundant and where they can find it,” he said.

He also noted that many of the spots frequented by sea lions are probably areas that fishery participants know well because they are likely to have large concentrations of fish.

The need for more updated research came three years after scientists found a massive decline in sea lion pup production in 2017 among the populations living in the central Gulf of Alaska. This coincided with a massive decline in the gulf’s Pacific cod numbers, a primary food source for Steller sea lions.

These population declines have been attributed to a marine heatwave, in which water in large areas of the Gulf of Alaska increased in temperature, killing off food sources and causing large die-offs in many species of animals.

And while sea lion pup numbers rebounded in 2019, their numbers are still low, Rehberg said.

“They are not increasing like they used to, and we think that's carried over from the pup failure three years ago and also might have something to do with reduced prey,” Rehberg said. “As this warm-water event is continuing, there are likely continued effects on fisheries directly affecting the sea lion numbers.”

Kim Raum-Suryan, who works as a marine mammal specialist with NOAA, said more recent data could help inform management decisions about which parts of the population are still declining, why the female sea lions are having “a difficult time” and what other areas may need to be protected, she said.

“Especially with the marine heatwave, the prey may be distributed to other areas,” Raum-Suryan said.

However, because of the COVID-19 pandemic, aerial surveys to measure sea lion populations could not be conducted this year, leaving a gap in data, she said.

“There is still something going on out there that we have not been able to determine. That is of great concern,” she said.

While Kodiak’s sea lion numbers are slowly increasing, other western Steller sea lion populations like those around the Aleutian Islands and near Russia continue to be in decline, Raum-Suryan said.

“Management and research are working well together figuring out what's going on,” she said.