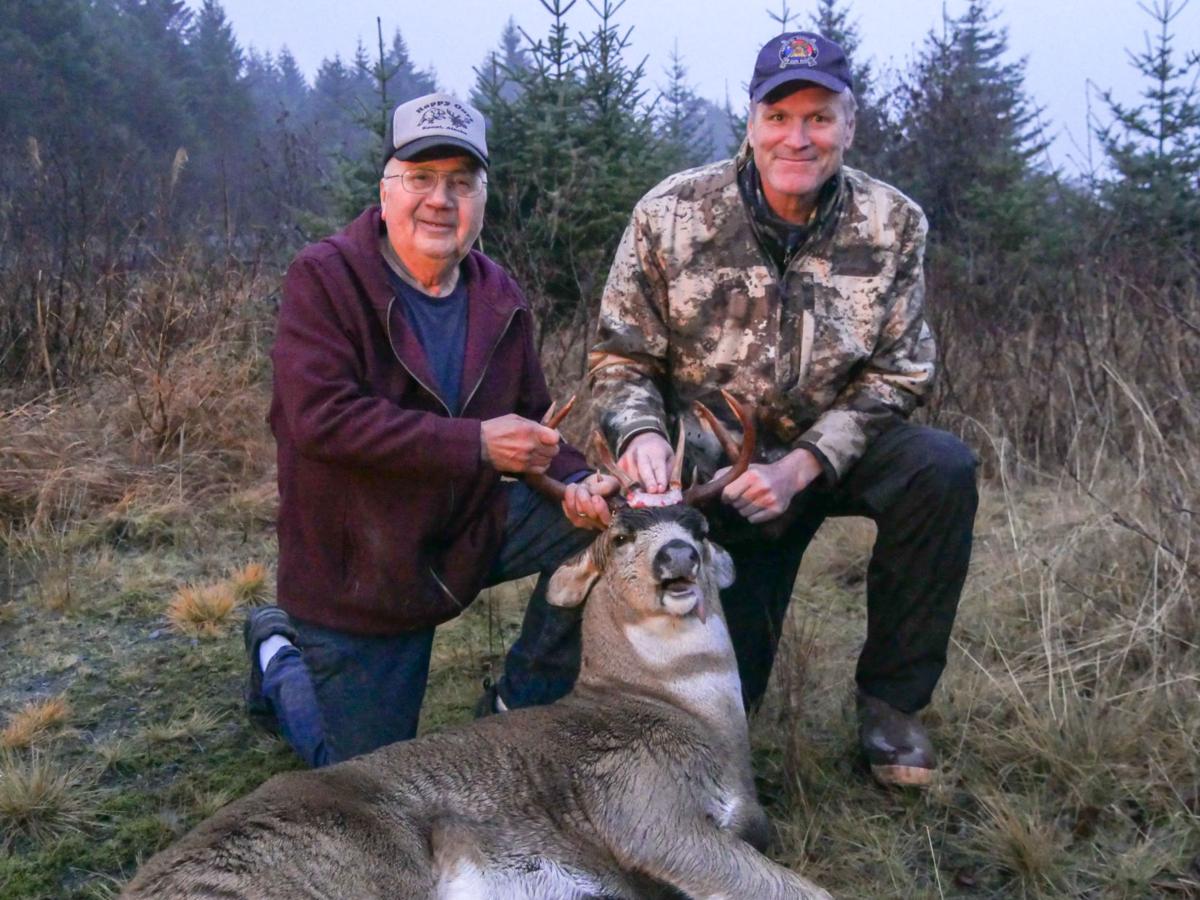 Harold Squartsoff Director of the Ouzinkie Native Corporation and Gov. Dunleavy with a deer that was shot on a hunt organized for Wounded Warrior veterans over Veterans Day weekend. 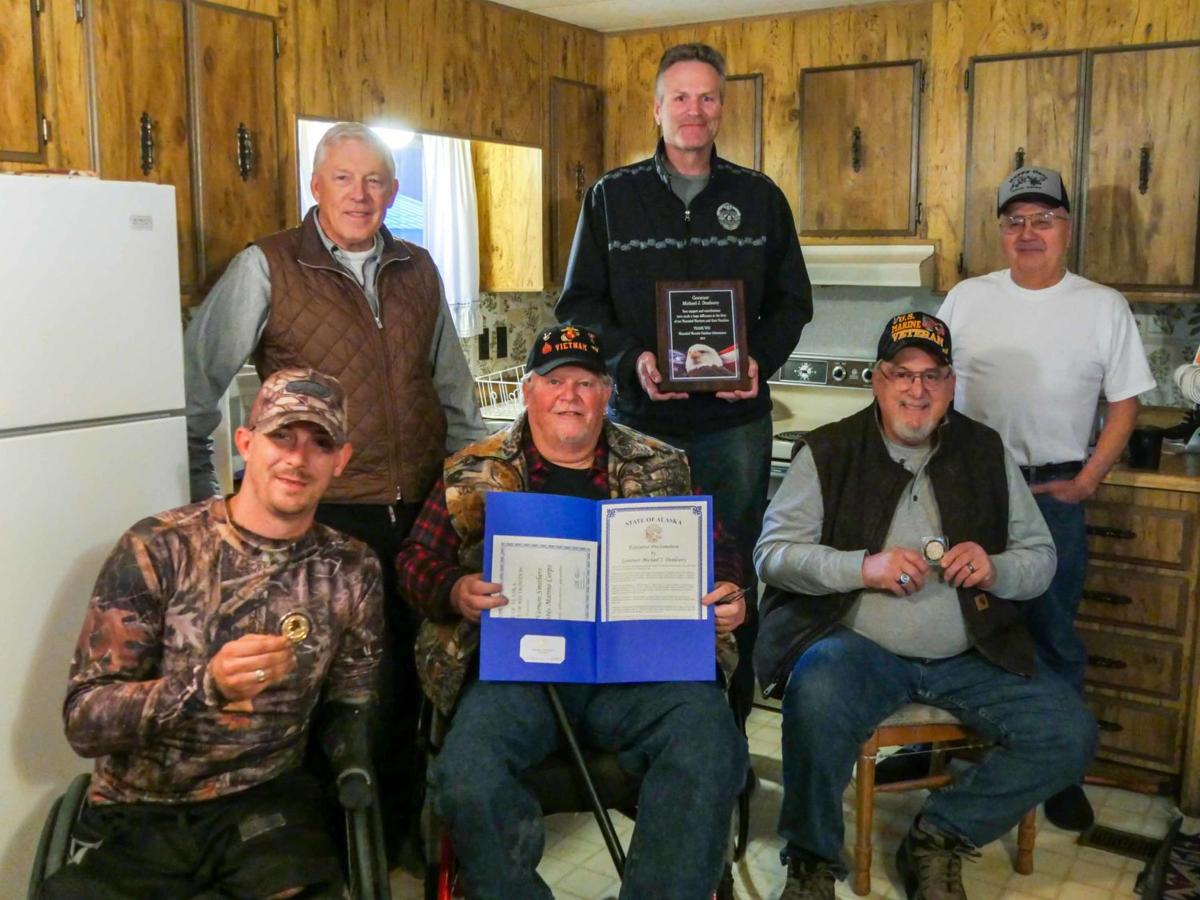 The governor holding a plaque of appreciation given to him by the Wounded Warriors Project, and Corp Vern Smithers holding a proclamation thanking the veterans for their service. In the picture from top left to right: John Sturgeon, vice president of lands for the Ouzinkie Native Corp.; Gov. Mike Dunleavy; Harold Squartsoff, Director Ouzinkie Native Corp. In the front row, left to right: Srg. Mike Nicholson, Corp. Vern Smithers, Private Mike Ripa.

Harold Squartsoff Director of the Ouzinkie Native Corporation and Gov. Dunleavy with a deer that was shot on a hunt organized for Wounded Warrior veterans over Veterans Day weekend.

The governor holding a plaque of appreciation given to him by the Wounded Warriors Project, and Corp Vern Smithers holding a proclamation thanking the veterans for their service. In the picture from top left to right: John Sturgeon, vice president of lands for the Ouzinkie Native Corp.; Gov. Mike Dunleavy; Harold Squartsoff, Director Ouzinkie Native Corp. In the front row, left to right: Srg. Mike Nicholson, Corp. Vern Smithers, Private Mike Ripa.

“Alaskans have the highest percentage of veterans and we look upon our veterans very fondly with great respect,” the governor said. “They sacrificed so much, so that we can live the life that we want.”

The veterans are part of the Wounded Warrior Project, a service organization that provides an array of services to veterans, including connecting them with unique trips and excursions around the country.

“They heeded the call when this country asked them for their help and sent them into battle, and in some cases they paid an incredible price so that we can have the lifestyle that we have,” Dunleavy said. “I feel we have somewhat of an obligation to honor these people.”

The veterans “got to see things and do things they may never be able to see or do again, and as a result of their injuries, (that) they have a hard time doing in the Lower 48,” the governor said.

“He (Dunleavy) asked if we needed a packer, and he packed deer for these guys because ... these guys can’t get too far from the truck,” said John Sturgeon, vice president of lands for the Ouzinkie Native Corp. and a U.S. Navy veteran.

As a packer, the governor helped skin and gut the deer carcasses, pack the meat into game bags, and store them in containers, Sturgeon said.

The veterans were all Purple Heart recipients, Sturgeon said.

Each hunter shot their limit of three deer per person and the meat was shipped to Florida and New York.

The hunters and governor stayed in trailers provided by the logging camp. The camp also built ramps on all the trailers.

Following the hunt, the Native corporation organized a ceremony with a 21 gun salute and a luncheon. Framed photos of the veterans were to be added to the wall of honor, which currently displays pictures of around 40 veterans.

However, due to high winds and rain, the group missed the ceremony. The governor said he was advised to return to Kodiak earlier than planned to not miss his flight out.

The veterans had planned to return on a boat to avoid the complications of trying to get wheelchairs into floatplanes, but due to the strong winds, the boat never arrived.

“Andrew Air provided two Beavers (floatplanes), and a logging company over there (on Afognak Island) had a truck with a lift,” Sturgeon said. The lift hoisted the veterans into the plane.

Sturgeon noted the trip could not have been done without help from the community.

The Afognak Native Corp. helped with the transportation and logistics; Safari Club International, a pro-hunter nonprofit, paid to ship the meat to New York and Florida; First Student, a school bus transportation company, provided a driver; and the Kodiak Senior Center provided a van that had a lift, he said

The Wounded Warrior veterans said they enjoyed meeting the governor and visiting Alaska for the first time.

“The whole state has been welcoming since we’ve been here and the governor being out there meant a lot to the guys out here and it was an enjoyable experience being out in the Alaskan wilderness,” said Nicholson, the Marine sergeant from Florida.

“We’re veterans too,” Sturgeon said of himself and others accompanying the guests and the governor.  “So we had a lot of camaraderie … talked about the good old days being in the service, joked with each other, and just had a lot of fun.”

About 11:15 a.m. on Saturday, searchers notified troopers they had found the woman deceased about 2 miles off the main trail and 4 miles from where her snowmachine was located on its side.

"We don't know what happened. Things were going well. We were there yesterday doing business," Howard Thies said. "The restaurant was doing really well. But now it's pretty much toasted."