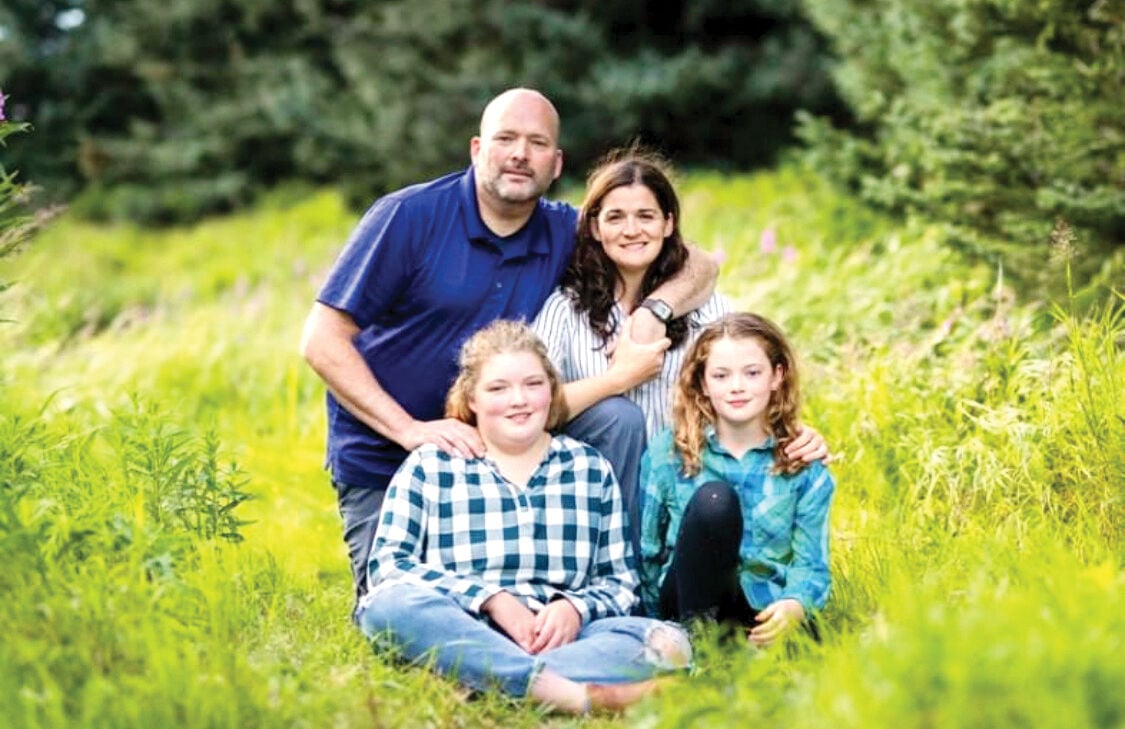 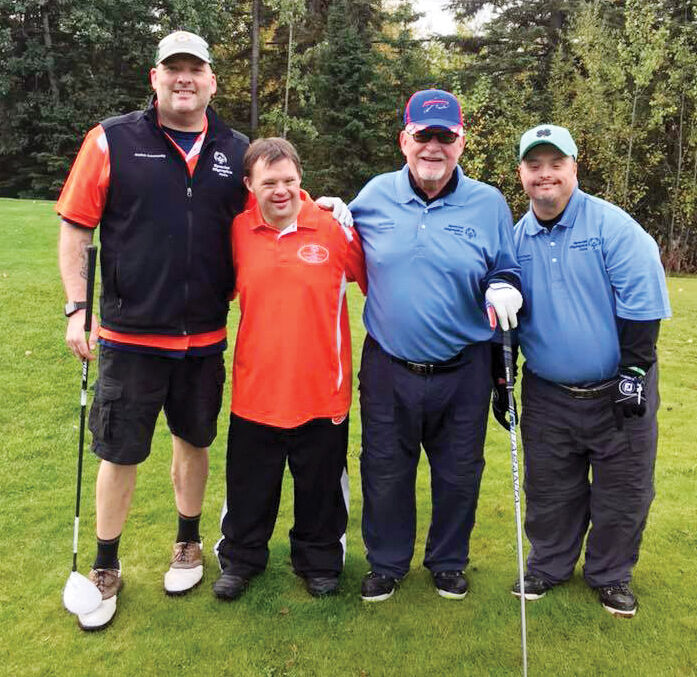 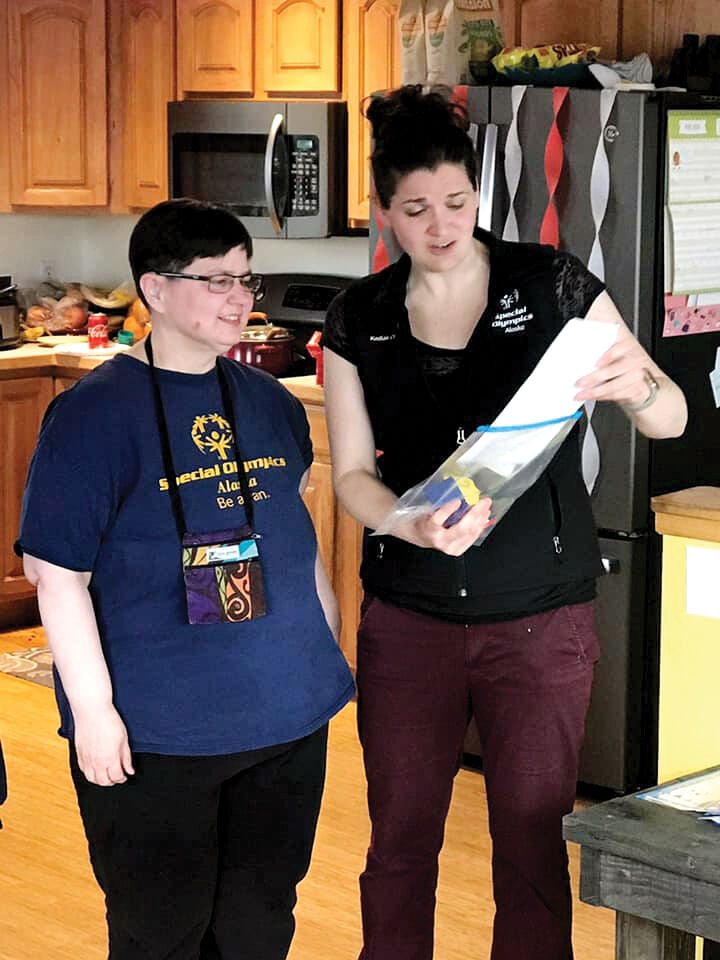 Those were all words used multiple times by Kodiak couple James and Lindsey Glenn during a recent 90-minute interview about Special Olympics.

Sitting at a kitchen counter in their two-story home, both — James sipping a cup of water and Lindsey mixing ingredients for chocolate chip pumpkin cookies — spoke with passion about an organization that has been part of their family’s life for nearly a decade.

James got emotional — he described himself as a softie hidden inside a 6-foot-3 frame — when thinking about the impact Special Olympics has on individuals.

“(It’s) showing people that they are valued through sports — two amazing things that should happen to everybody,” James said. “It should be a human right to be happy and healthy. It is a gift.”

The Glenns don’t have to be involved. They don’t have special-needs children. They have full-time jobs. They have after-work obligations. But, here they both are carving out time to volunteer. Their two daughters — Lindy, age 12, and Delaney, age 10 — are also involved. It is a family affair.

James coaches bowling, is a golf partner and is the de facto area director. Lindsey coaches swimming and takes care of social media postings and paperwork. Together, they make the perfect team.

The Glenns are the 2020 Special Olympics Alaska family of the year. The family was bestowed the award during a Zoom ceremony on Sept. 23 after being notified of the honor weeks before. Being told over the phone nearly brought James to tears.

“We didn’t feel like the family of the year — it is just something that we love to do,” James said.

Lindsey compared their role in Special Olympics to the individuals who are involved in their childrens’ lives, like teachers and coaches.

“People are doing that for our family. It is the least that we can do for someone else,” she said.

The passion for other people that runs through James’ veins can be traced back to his mom. He inherited her compassion and big heart.

James’ parents were foster parents. They had three children of their own — James is the baby of the group. They fostered youth and adopted seven of them. The family lived in a seven-room motel that was converted to a house in Germfask, Michigan, population 486. Mom tended the home. Father was a logger and made just enough money for the family to get by. It was a rigid lifestyle, with dinner and laundry scheduled.

“If you missed your block, you didn’t have clean clothes that week,” James said. “I went to school in the wintertime with shorts on because I missed my window.”

The award is traditionally handed to families who have an individual with special needs in the family. The Glenns do not, which made them stand out to the Special Olympics Alaska selection committee.

“They have taken on every facet that is needed to have a successful running community — that is something that you just don’t see every day. The fact that they want to get their children involved is amazing as well,” said Sage Caswell, Special Olympics Alaska director of community programs. “Not only do you have parents who are trying to do something worthwhile in the community, they are setting an example for their children — that is really incredible.”

Living in a small town in Michigan didn’t present volunteer opportunities for James. His family simply helped neighbors when needed — something that he still practices to date. He often can be spotted plowing snow out of neighborhood driveways or doing odd chores for elderly ladies, which stems from his close relationship with his grandmother. During the holidays, the family buys gifts for kids in need and leaves them at doorsteps, in a ding-dong-ditch way. They also have volunteered at the local food bank.

“Just thinking, what can I do to help somebody else — I see that about James a lot,” Lindsey said.

The Glenns moved to The Rock in 2006 when Lindsey accepted a Spanish teaching job at Kodiak High School. Years later, James found Special Olympics. He started as a unified golf partner.

James’ niece, Jamie (she was named after James), was born three months early and has cerebral palsy. She didn’t let her physical disability get in the way of achieving her goal of becoming a reporter. Jamie is a reason why James started volunteering for Special Olympics.

“(She is) just always in inspiration to our whole family,” James said. “I never once have heard her complain about anything. Thinking about it, I’ve known a lot of people with intellectual disabilities, and you hardly ever hear them complain, and in our lives, we are like, ‘this sucks, and this sucks.’ They have such good attitudes.”

James realized he wanted to get more involved in the organization after seeing former Kodiak resident and Special Olympics Alaska CEO Nicolle Egan interact with individuals at his first state golf tournament.

“When somebody starts volunteering for something like this, and you don’t really get anything out of it, it is not true. You are getting something out of it,” James said. “They call it volunteering, but it’s not. I’ve volunteered for things before that I didn’t want to do. This doesn’t feel like anything except fun.”

James’ role in Special Olympics has expanded over the years. He joined the bowling team, and, in 2018, replaced coach George Lee when he stepped away for health reasons. James has remained coach. When longtime area director Dan Canavan retired a few years ago, the Glenns became the contact point for the community management team.

“It really hit me that we are all people, we all have goals, and we all want to feel valued, important and accomplished,” said Lindsey, who resurrected the island’s Special Olympics swimming program in 2019. “This whole organization exists so that people with disabilities can have the feeling. I’ve taken that for granted my whole life — the value of athletics and being part of a team.”

Kodiak’s history with Special Olympics is rich, with two former Special Olympics Alaska CEOs — Jim Balamaci and Egan — getting their starts on The Rock. The island’s 2001 floor hockey team captured the gold medal at the Special Olympics World Winter Games in Anchorage. Recently, athletes Christopher Kavanaugh, Brittany Tregarthen and Eric Mangrobang have shined on a world and national level.

As the years have passed, athletes have gotten older or moved away, which has depleted the number of participants and sports Kodiak offers. James said there are around 20 to 30 active athletes, with most of them participating in bowling. However, there is a rise in younger athletes in the program. At the same time, Caswell credits the Glenns for increasing the involvement of Special Olympics in the Kodiak community in the past few years. James was the ringleader of the bocce court getting built at East Addition Park.

“They just realize that there is such a profound impact, not only that they can have on the athletes, but it is two way,” Caswell said. “You think you are doing something positive for the community, but often it is the other way around, and there is something wonderful happening to you as well.”

Both James and Lindsey have connected with the athletes and have stories to share.

James felt like a failure his first year because often his golfing partner — Christopher Bullert — didn’t want to golf. It turned out Christopher was reluctant to golf when the Seattle Mariners were on television. James aligned the practice schedule to the Mariners’ schedule. Everything was good after that.

Then there was the time in Anchorage when the group went to dinner at Olive Garden. Arnie Tveit wanted spicy food, so that is what he ordered. After the first bite, he decided it was too hot. James swapped plates, and Arnie still talks about spicy food to this day.

James and Aharon Dolph call each other “soft kitty” because when they were roommates on a trip, they watched a “Big Bang Theory” episode together.

“Knowing their individual quirks and knowing about them — you really make that deep connection with them,” Lindsey said. “We had a kid who would freak out if you would write a ‘4’ with the top open instead of closed like a triangle.”

Lindsey met James at her uncle’s cannery in Excursion Inlet in Southeast Alaska. James worked his way to the Last Frontier after graduating high school and was a seasonal worker in the seafood industry before moving to Kodiak. Lindsey — a graduate of Bartlett High School in Anchorage — worked at her uncle’s cannery during the summer to pay for college.

After the first date, it’s a mystery why there was a second date.

James invited Lindsey over to his place to christen a newly built hot tub. He warned her that it was naked Wednesday. She brushed off the comment.

“I go over there, get my swimsuit on, sit down and go, ‘oh, wow, the stars are so night tonight,’” Lindsey said. “I look over and go, ‘you’re really naked. What the heck?’ He was sitting there with a floater over his legs.”

And that is how their relationship started. Years later, just months after arriving on The Rock, they married at Nemetz Gazebo on April Fools Day. The wedding was so low-key that James didn’t even tell his family. The couple eventually had receptions in Anchorage with Lindsey’s family and in Michigan with James’ family.

“My brother didn’t believe me for six months,” James said. “I had to send them a copy of our marriage certificate.”

It’s been a hectic and busy life after that, but the Glenns wouldn’t want it any other way. They are at their best when they are helping others out. After this year’s golf season ended, James received a call from the father of a Special Olympics athlete thanking him for his involvement with the organization.

“I feel selfish. Sometimes, it makes me feel so good,” James said. “People are like, ‘thank you,’ and there is no thanks needed. I’m not doing it for anything other than it is awesome. It is so cool.”

Thats a great story. Giving of self and service. The key to happiness which it appears they have found. A great example to us all