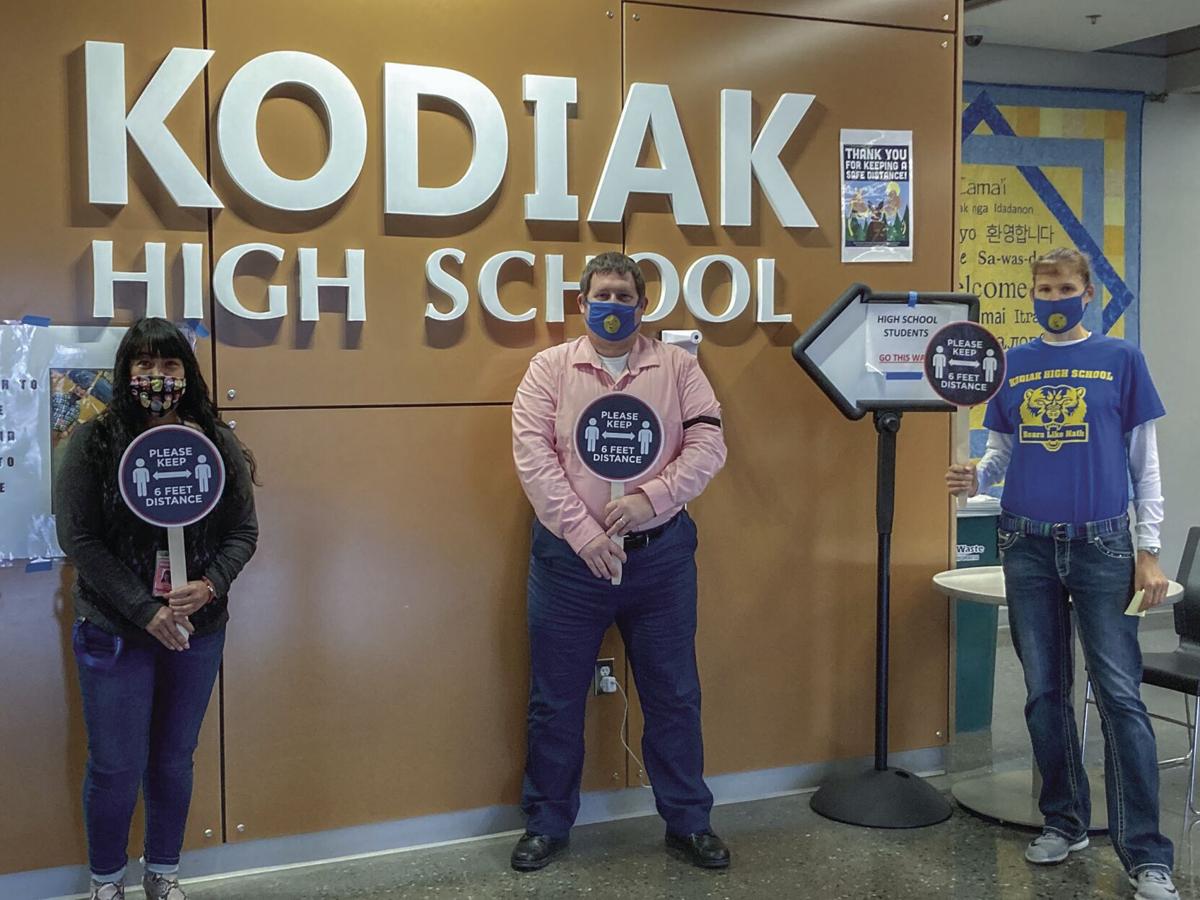 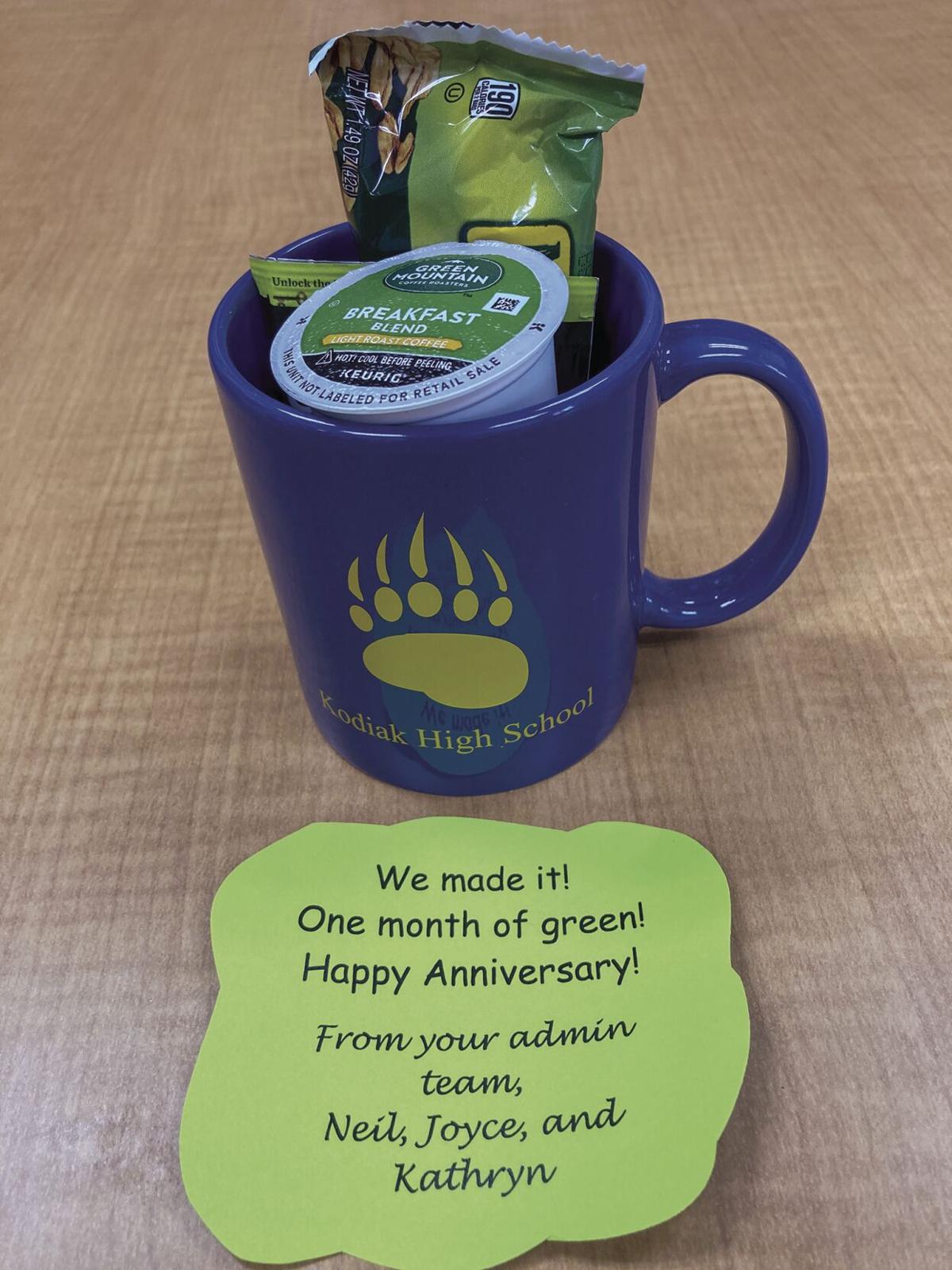 Green-themed goodies that Kodiak High School principals gave to staff to celebrate 30 days of school at the green, or in-person, level.

Green-themed goodies that Kodiak High School principals gave to staff to celebrate 30 days of school at the green, or in-person, level.

Thursday marked 30 days since Kodiak’s schools kicked off the academic year with in-person education, or the green level. Yellow is a mix of in-person and online, and red is all online.

Several classrooms at Peterson Elementary and North Star Elementary recently had to be moved to red because of positive COVID-19 tests in the schools. But those instances aside, every student who wants in-person education in Kodiak is getting it, 30 days after it all began.

“I’m not talking about today, but the fact that we’ve been in school for a month is a huge success. It’s a celebration,” North Star Principal Kerry Irons said on Friday. It was the same day North Star was closed for cleaning due to the one case at the building.

“Students are thrilled to be back in school, face-to-face and to actually see their friends and their teachers,” Kodiak High School Assistant Principal Joyce Blair said. “So it’s a good thing to be back here in green.”

Some of the fears from the summer months have not come to pass.

Masks, for instance, don’t seem to be an issue. Despite the fears of some adults, kids are wearing them in class, at recess and while walking the halls. At Peterson, where the school mascot is the puffin, masks decorated with puffins abound.

“We’re not having to tell them, ‘Hey put your mask on.’ They’re coming in, they’re ready, they want to be here,” Peterson Principal Michelle St. Clair said. “It’s almost like a normal thing now.”

The COVID-19 cases that have been identified in schools have not spread within the schools. District policy is that if one case is found in a school, that school shuts down for 24 hours and everyone goes to online learning. Then, the next day, the close contacts of the positive case remain online and everyone else goes back to school. So far, it’s worked.

St. Clair got word about the positive case at Peterson about an hour before school let out. The kindergartners and the first graders had already gone home. The students who shared a classroom with the positive case went home with parents. Everyone else rode the bus or got picked up like normal. The classroom in question will be quarantined until Oct. 15.

At North Star, things were a little more complicated because the case was identified in the morning. It took longer for parents to get their children, Irons said. That classroom will be quarantined until Oct. 23.

Enrollment is also up slightly. School enrollment has fallen 10% over the past 10 years in the district, and other districts have struggled to keep students this fall. But this year, enrollment in Kodiak school district might end up being higher than last year.

At Monday’s Board of Education work session, Assistant Superintendent Beth Cole announced that 2,294 students were enrolled across the district. That’s up from 2,253 last year, but still lower than the 2,395 students enrolled during the 2018-19 school year.

The number isn’t official yet, but it’s the best guess so far. The district is in the midst of its October count, a 30-day period where it watches enrollment and sends the numbers to the state. That will officially decide this year’s figure. But as of now, the number is up.

In person, 809 students are enrolled at the elementary schools, 330 at Kodiak Middle School and 500 at Kodiak High School. Rural schools have 89 students combined.

These numbers matter. State funding is tied in part to enrollment, so falling enrollment means less money. Kodiak is unusual in Alaska for not losing students. Across the state, public school enrollment has plummeted as parents turn to private school or independent homeschool options.

“The big districts lost hundreds of thousands in revenue because they lost so many students to either private schools or Statewide (an independent homeschool group),” LeDoux said at the meeting. “We did not. … We’re one of the few districts that are maintaining.”

In September, Alaska Public Media reported that Anchorage schools were down more than 1,000 students and Juneau had lost close to 10%. The Kenai Peninsula Borough School District passed a resolution asking the state to fund education based on last year’s enrollment numbers.

The one problem with the numbers is that the district gets reimbursed only 90% for AKTeach students. With the number of homeschool students more than doubling, the district could lose up to half a million dollars, Ledoux said. But the students are still in the district and many will likely rejoin regular school next year.

“I believe that many of the homeschool students and certainly all of the remote students, once we get through this — and we will get through this — will be back in our regular school. Even though we don’t get paid as much, we still held onto them,” LeDoux said.

Plenty of things about the new school year have been hard.

Instruction isn’t easy, but teachers are adapting. Lindsey Glenn, who teaches Spanish at the high school, said the new curriculum the district adopted has been challenging to get used to. It’s designed to translate better to online learning, but she said, at least for Spanish, it moves too quickly through the beginning stages.

“Kids are doing awesome. But I definitely have to work and pull more to get them engaged,” Glenn said. “I’ve got to push through my mask more and I’ve got to pull them through theirs more.”

Social distancing is hard to enforce, with kids of all ages being pulled together with force that sometimes seems stronger and more persistent than gravity. Staff at the high school brandish signs that read, “Please keep 6 feet distance.”

Harder still is trying to offer students some of the social events that accompany the school year: homecoming, dances, athletic events.

Most, like homecoming and the dances, have been canceled. Some spectators were allowed to attend Friday night volleyball games this fall, but on Friday, with the rise of cases in Kodiak, the team played in front of empty stands.

“The social aspect of high school is not what they’re used to. It’s not the normal high school experience,” Hecht said. “And it weighs on me. That’s probably the hardest thing right now.”

Thirty days is not a very long time in the grand scheme of the school year. There will likely be more cases and more challenges in the future during this most unusual school year. And that does weigh on people.

“We don’t see anything going away quickly,” LeDoux said. “We’re finding peace in the tasks we’ve been given in this environment.”

But he added that he hopes he can wear his green sweater again next month.