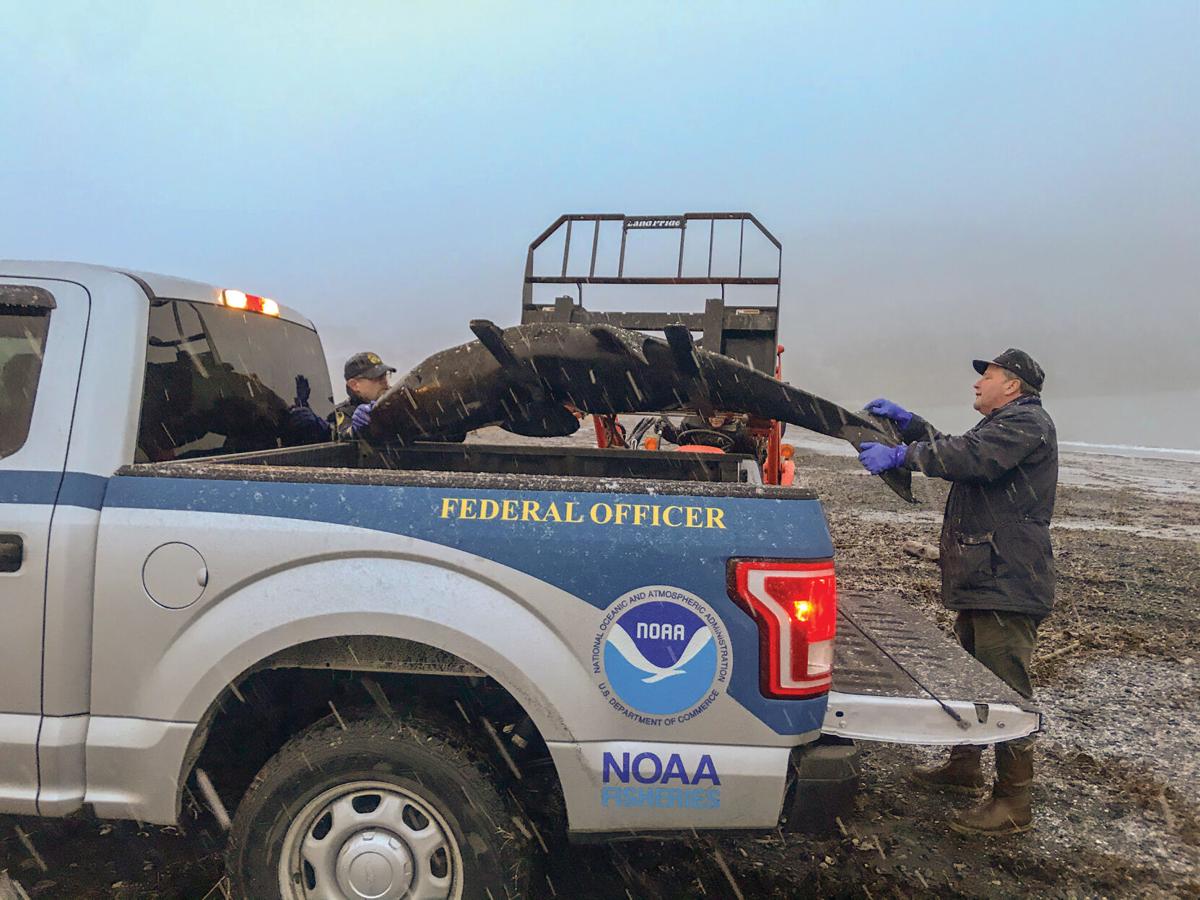 NOAA workers load a dead whale into a truck. The whale was found on Kalsin Beach.

NOAA workers load a dead whale into a truck. The whale was found on Kalsin Beach.

Alaska’s first marine mammal stranding of 2021 occurred on Friday when a deceased baby orca washed up on Kodiak’s shores.

Miranda Stohl and her 7-year-old son Cyas found the animal while they were exploring a beach on Kalsin Bay, located on the northeastern corner of the island. Experts said the orca was likely born days or even hours before she was found.

Stohl called the National Oceanic and Atmospheric Administration, which sent officers to respond and bring the animal into town for a necropsy.

A necropsy of the corpse can provide biologists with valuable clues about the orca population and overall health of Kodiak’s marine ecosystem. However, it was important to conduct the procedure quickly before decomposition began to compromise the tissue samples.

“Survival of new offspring is important for their population, so if we learn anything from her that gives insight to potential threats to young orcas here, that could be extremely important.”

For nine hours, Iacobucci documented and sampled as many tissue types as possible.

She meticulously took body and blubber measurements, and cut open the animal to assess whether there were any abnormalities to the organs before removing the samples.

The samples were preserved in formaldehyde and shipped to NOAA labs for analysis, which could take months.

Iacobucci determined that the baby orca died from respiratory distress. Samples sent to numerous NOAA labs will determine if there were other underlying causes of death or other health issues.

The data collected during the necropsy can also help NOAA fisheries experts make better decisions about managing the stocks of marine mammals.

“It is unprecedented to find a stranded orca, especially such a young one and in such a fresh condition,” he said, adding that the orca may have been part of the Southern Alaska resident orca population that ranges from southeastern Alaska through the Kodiak Archipelago.

The Sun’aq Tribe has a stranding response agreement with NOAA and are notified when a stranded animal is found on the island.

Stranded animals can provide data on a range of species, feeding habits, reproduction, age distribution, diseases, parasites and contaminant levels, among other topics. The data can also help NOAA with management decisions.

Iacobucci noted that Stohl did the right thing by contacting NOAA as soon as she did.

According to NOAA, quickly reporting a stranding quickly can help the agency identify incidences of mass mortalities or strandings caused by disease or toxicity and pollution problems.

Iacobucci noted the importance of reporting a stranded mammal as soon as possible and not interacting with the animal’s body. Instead, it is better to allow experts or community members with the proper permits to touch the animals, which are often under federal protection.