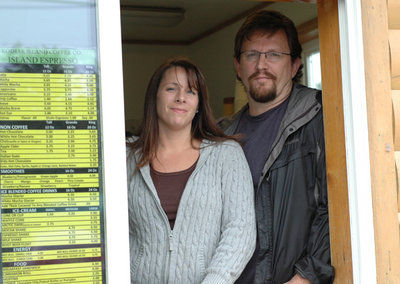 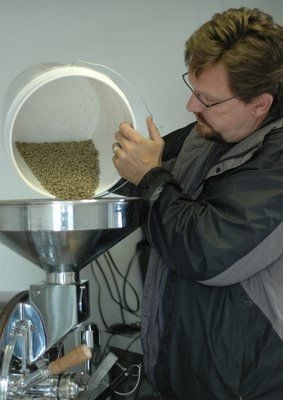 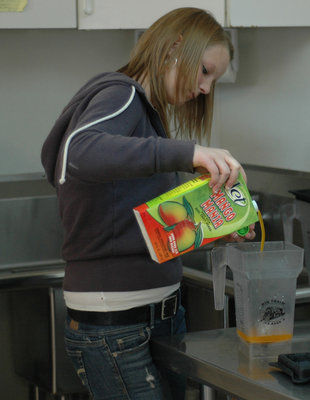 The Picketts’ Hawaiian vacation 17 years ago is to thank for their business Island Espresso.

On that trip, Leonard Pickett had a blue-raspberry Hawaiian shaved ice that changed his life forever.

He didn’t know it at the time, but that was the moment Island Espresso was born.

Leonard and his wife Misty came back to Kodiak and bought a shaved-ice machine for the 1995 Crab Festival. After the festival they put the machine in a mobile trailer parked where Petro Marine is now and opened for business.

“We kept hearing people who were coming to get our shaved ice, if we had anything hot to drink on the cooler days that we were open,” he said.

The couple listened to their clients and when the espresso cart in El Chicano Mall became available to purchase, the Picketts gobbled it up.

A year later, in 1997, the Picketts bought a 24-foot Nomad travel trailer and moved the business to its present location at 1213 Mill Bay Road. Island Espresso was the first drive-through coffee shop in Kodiak and Pickett said he has been told it was one of the first in Alaska.

At the time the Picketts and another employee handled all the shifts. Now Island Espresso has eight employees and has grown out of the Nomad travel trailer to a wood-sided building.

Pickett said he didn’t expect the business to take off the way it did.

“I knew there was some potential for it because of what I had been seeing in other places, especially in the Northwest,” he said.

As for the shaved-ice, Pickett said he brings the machine out every so often during the summer.

“We have added different things and just ran out of room, basically,” he said.

“It is a little bit on the sweeter side,” he said. “As far as our espresso drinks it has always been our best seller. White chocolate is pretty much good with anything.”

In 2004, Pickett began experimenting roasting his own coffee beans.

“We had always got our coffee off-island,” he said. “We were getting good products, but freshness with shipping could kind of be in issue at times.”

It took him a year to perfect the perfect roast.

“There is really an art to it,” Pickett said. “I wasn’t even using it in my shop. I was roasting, sampling and just kind of trying to learn the tricks of the trade.”

Pickett, whose roasting company is dubbed the Kodiak Island Coffee Co., not only supplies his shop but also has contracts with Java Flats, the Coast Guard base and many other places around town and on the Mainland. He also sells coffee at Cost Savers and does fundraisers for various organizations.

It takes him 12 to 16 minutes to roast a batch of beans, which he gets from importers in the Lower 48.

“I’m still figuring stuff out,” he said. “Because what I found is most successful roasters are not willing to give up their secrets.”

Pickett said some customers have been visiting the shop since the beginning.

“That is the cool thing about it, knowing that you are doing something well enough that people continue to come to your place year after year and day after day,” Pickett said.

Mirror writer Derek Clarkston can be reached via email at sports@kodiakdailymirror.com.

A private school in Fairbanks has not required masks, and the principal said they’ve had no Covid-19 outbreak.

Owners of Fairbanks gun shops attribute the increased interest in guns and ammo to Joe Biden’s presidency as well as to the Covid-19 pandemic, which has both spawned uncertainty and disrupted the supply chain.

The Arctic Servants, the Fairbanks chapter of the Christian Motorcyclists Association, held its annual blessing of the bikes on Saturday.