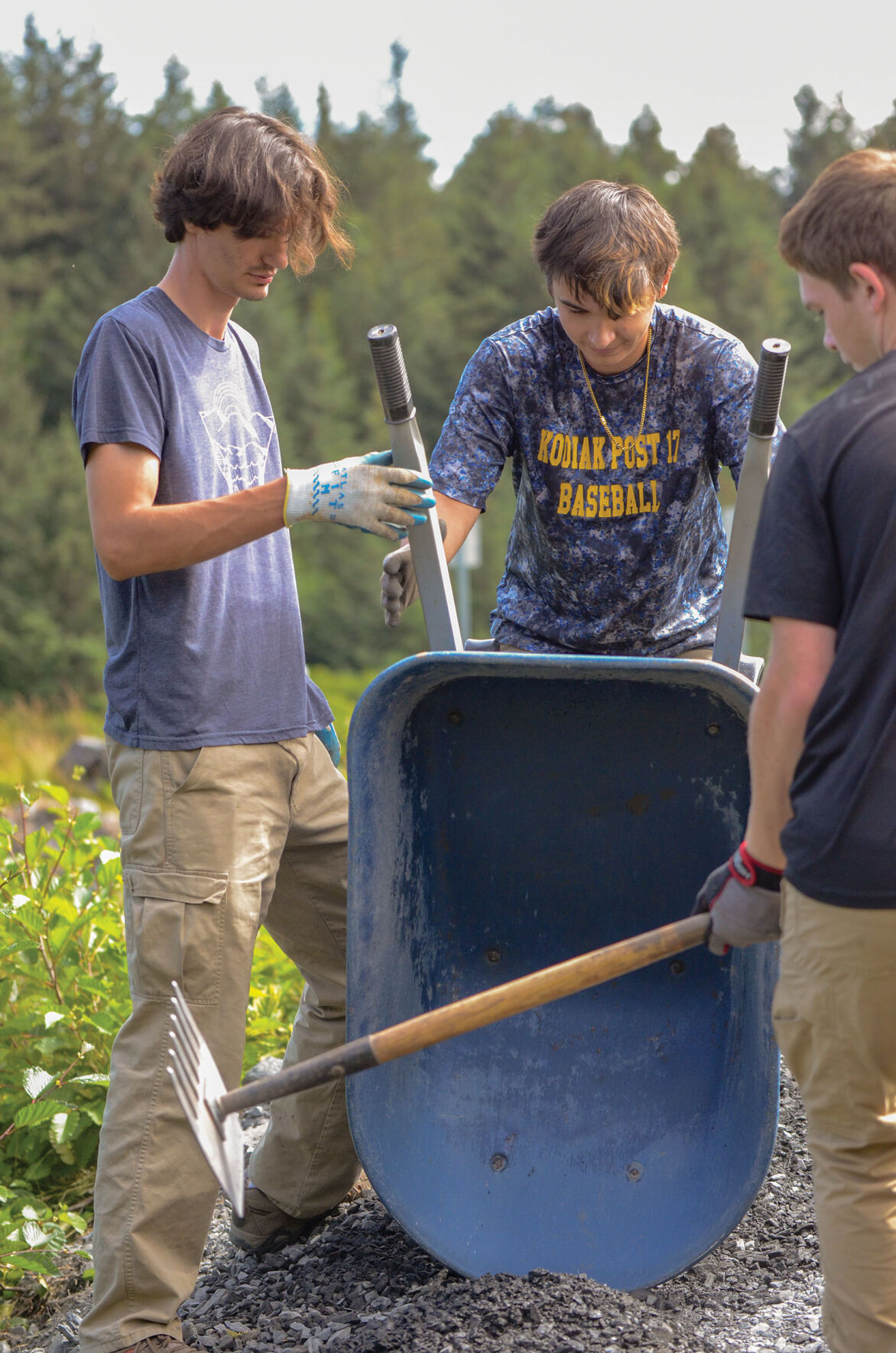 Among the volunteers who joined the trail-building crew on Thursday  were Gareth Jones, Jace Crall and Jack Malloy. 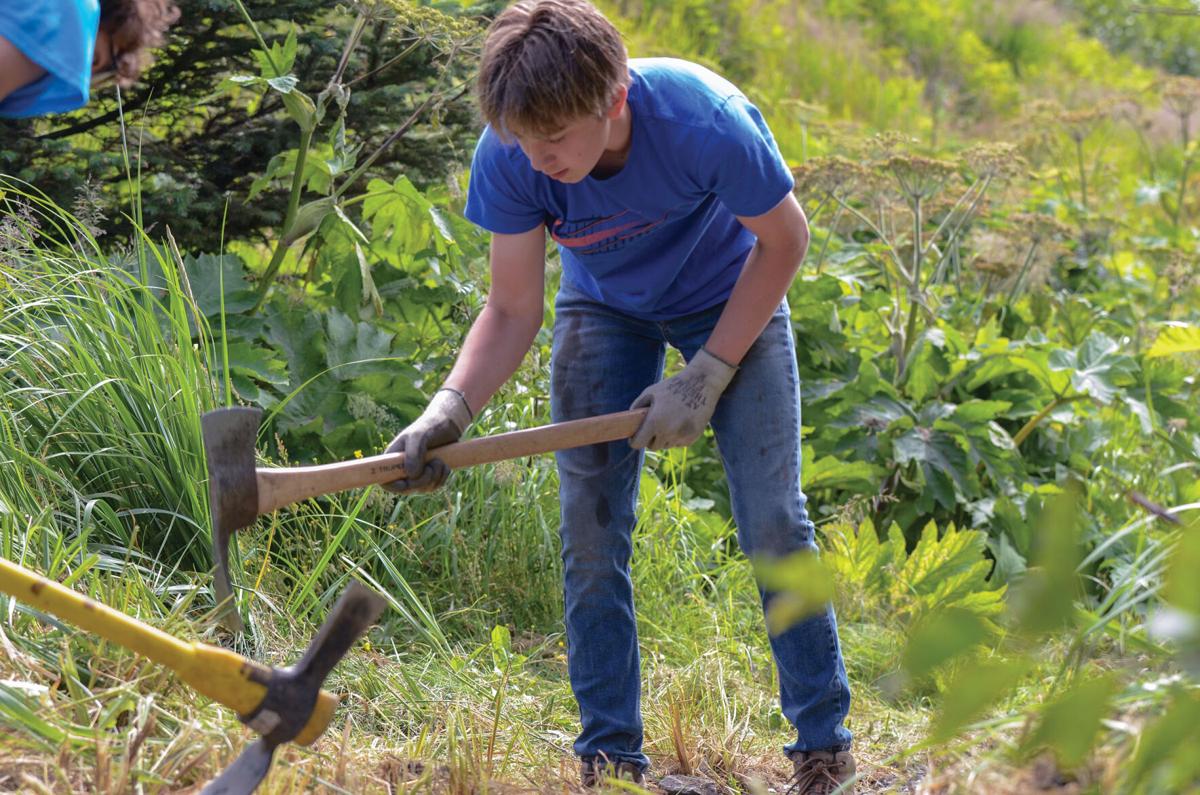 Among the volunteers who joined the trail-building crew on Thursday was Max Robinson.

Among the volunteers who joined the trail-building crew on Thursday  were Gareth Jones, Jace Crall and Jack Malloy.

Among the volunteers who joined the trail-building crew on Thursday was Max Robinson.

On the eve of the first Alliance Baseball League state tournament, three local players longed to be in Anchorage to be part of the festivities at Mulcahy Stadium.

Instead, on an overcast Thursday afternoon on The Rock, they were creating a new footpath on Near Island, while dreaming of swinging a bat and fielding a ball. Their drenched shirts evidence of their hard work.

Since Kodiak Post 17 — the island’s summer traveling baseball team — opted not to participate in the league because of COVID-19 concerns, that opened up a big chunk of time for Jack Malloy, Jace Crall and Gareth Jones.

With a free schedule, they went to work, jumping on a trail-building crew for Island Trails Network, laying down a path that extends the Channelside Trail.

Crall — a rising junior at Kodiak High School — doesn’t even like to hike, which tells you how bored he was without baseball.

“I never go outdoors,” he said.

He got acquainted with the outdoors, spending the past five weeks carving out a path that starts at Emerald Heights and ends just past the Afognak Native Corporation building. The new trail adds about 400 meters to the existing trail that takes hikers on a scenic journey of Kodiak’s harbor.

Marcus Dunbar, project manager and former Kodiak High track and cross country coach, estimated the Channelside Trail is now .75 miles long. A complete trail around Near Island is part of the city’s Near Island Development Plan, which Dunbar said would be a 3-mile loop around the island. There is no timetable set for the start or completion of that project.

“I love the idea of a perimeter trail all around the island, and this is a serious phase to make it happen,” Dunbar said. “You can have fun runs on it, and you can have tourists come hike the island and see all different kinds of views — the boat harbor, channel side, Trident Basin and the North End part.”

Work on the new trail was made possible when COVID-19 forced the cancellation of the Brian Young Invitational — an all-star high school track meet that was set to take place in Kodiak in June. Michelle Kouremetis, a former star runner for Kodiak, donated money to the meet, but when the event didn’t happen, Dunbar — with Kouremetis’ approval — shifted the money to Island Trails Network, which funded the connector trail.

Dunbar started working on the Channelside Trail in 2014 when his cross country team volunteered for Island Trails Network, which started connecting Near Island’s footpaths years before. The passion that Dunbar started with was still present seven years later.

The connector trail is ready for hikers and will be finished on Aug. 15 after the high school cross country team lays a second gravel layer. Dunbar said he needed three dump truck loads of gravel for the trail, while all the resources used on the path were all found on the island.

After a 30-minute tour, Dunbar returned to work alongside his crew of six, packing down gravel.

This new grant will pay for phase II. The end result is to create more space for work bays, warm storage, staff areas and a natural gas storage and distribution facility, according to a description by David Bredlie, borough public works director.

“Nootkatone is responsible for the characteristic smell and taste of grapefruit and is widely used in the fragrance industry to make perfumes and colognes,” the EPA said. “It is found in minute quantities in Alaska yellow cedar trees and grapefruit skin.”