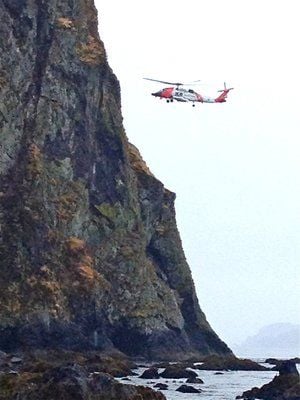 A Coast Guard MH-60 Jayhawk noses in close to pick up the stranded hiker, on April 23. (Photo courtesy of Steve Wielebski) 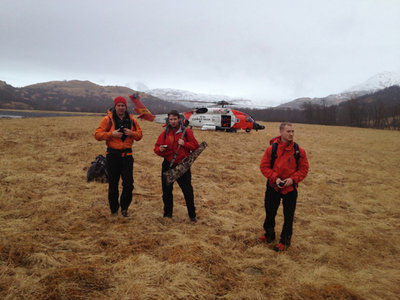 Members of the KISAR search team, John Sikes, left, Jason Waggoneer, and Nick Beheler prepare to begin the search for the missing Fish and Game hiker on April 23. (Photo courtesy of Steve Wielebski)

A Coast Guard MH-60 Jayhawk noses in close to pick up the stranded hiker, on April 23. (Photo courtesy of Steve Wielebski)

Members of the KISAR search team, John Sikes, left, Jason Waggoneer, and Nick Beheler prepare to begin the search for the missing Fish and Game hiker on April 23. (Photo courtesy of Steve Wielebski)

Matthew Dias sang “99 bottles of beer” over and over again Monday night as he sat alone on a small grassy ledge 100 feet off the ground, waiting for help to come.

When Dias, 35, left the Alaska Department of Fish and Game herring observer camp at Saltery Cove on Monday afternoon, he was just hoping to explore a neighboring cove.

He told a coworker he was going for a hike and left the camp around 1 p.m. Dias walked 15 minutes east toward the beach, then started climbing the cliff to get around the water to the next cove. After about 10 minutes of climbing, he realized he was stuck and in for a long night.

“It was a little daunting sitting there at 2 p.m., knowing it was going to be 16 to 18 hours before someone came for me,” Dias said.

The grassy ledge where he got stuck was large enough for him to sit down, but he sang to himself the entire night to prevent sleep from setting in.

“I sang 99 bottles of beer all the way to the last bottle,” he said. “I could not risk falling asleep. That was my biggest worry.”

When Dias didn’t return to camp Monday evening, his partner followed protocol and called the Alaska Department of Fish and Game with a satellite phone. James Jackson, the salmon and herring management biologist in Kodiak, alerted the Alaska State Troopers around 11 p.m. that Dias was overdue from his hike.

A Coast Guard MH-60 Jayhawk helicopter dropped off four members of KISAR near Dias’ camp in Saltery Cove around 8 a.m. Tuesday. They split into two groups and started with a ground search, following four-wheeler trails while the helicopter continued flying over the area.

Dias said the Coast Guard helicopter passed him four times and didn’t see him. The Resolution, a Fish and Game boat, finally located Dias around 10 a.m. after he took off his natural-colored clothing and turned it inside out so its white lining was showing.

KISAR member John Sikes was the first person to talk to Dias. Sikes stood on the beach about 100 feet below the ledge where Dias was stuck and yelled up to him.

“We could yell back and forth,” Sikes said. “He asked me what time it was, he waved and gave me a thumbs up. He said he was doing good and didn’t have any injuries.”

The Jayhawk refueled in Kodiak and returned to the scene to hoist Dias up.

“When they came in, they tried to nose up to the cliffs but couldn't get that close," said KISAR president Steve Wielebski. “They let out 180 feet of cable and one of their rescue swimmers went down on a cable. They put another harness around him (Dias) and picked him up so the two guys were flying through the air away from the cliff."

The helicopter returned to the Kodiak Air Station, where emergency medical personnel were waiting to check on Dias, who did not suffer any injuries.

Dias was back at work at Fish and Game on Wednesday, where he has worked for 10 field seasons.

“(Dunleavy) is wasting everyone’s time and money arguing with boroughs and cities about who has what power,” Cook wrote in an email shared with the Fairbanks Daily News-Miner.

Made with a ‘touch of love’: Teen balances the joys of baking cakes and home schooling during pandemic

Tenth grader Amelia Williams, who is home schooling this year due to COVID-19, has turned her love of baking into a busy home business.