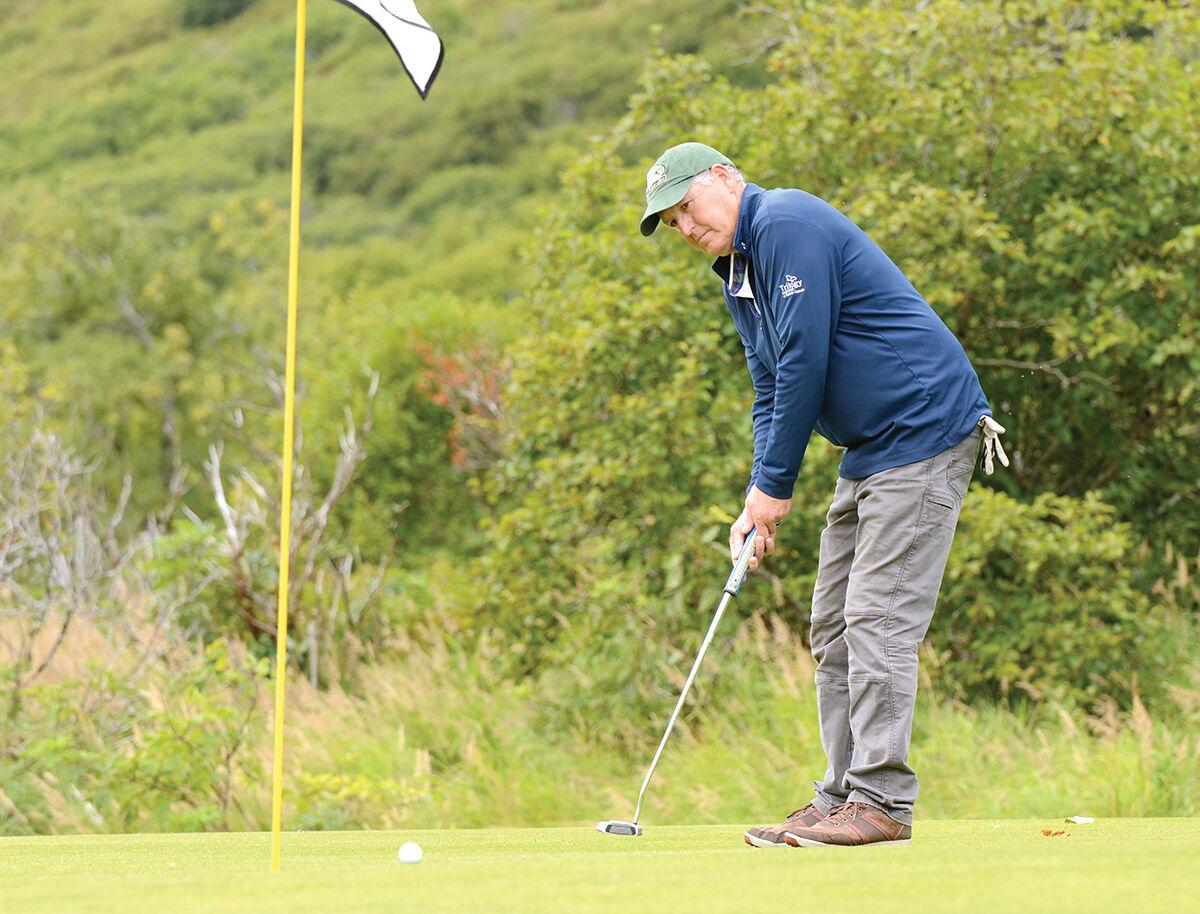 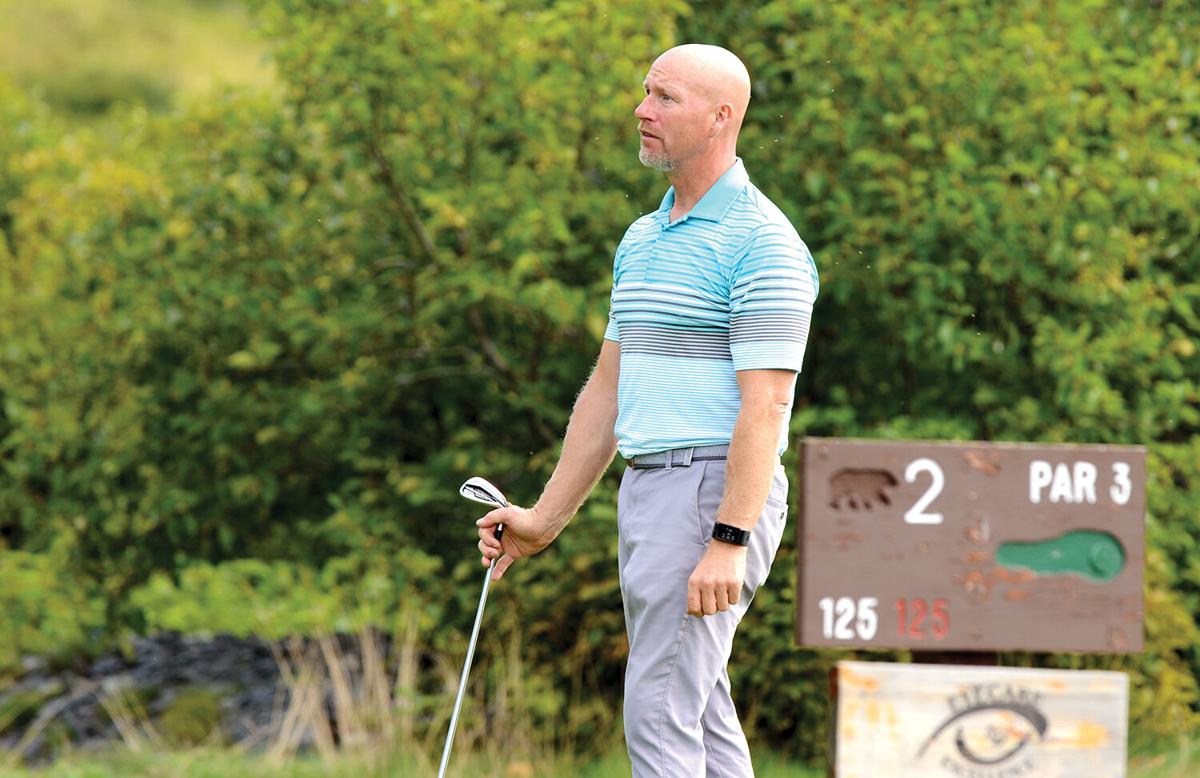 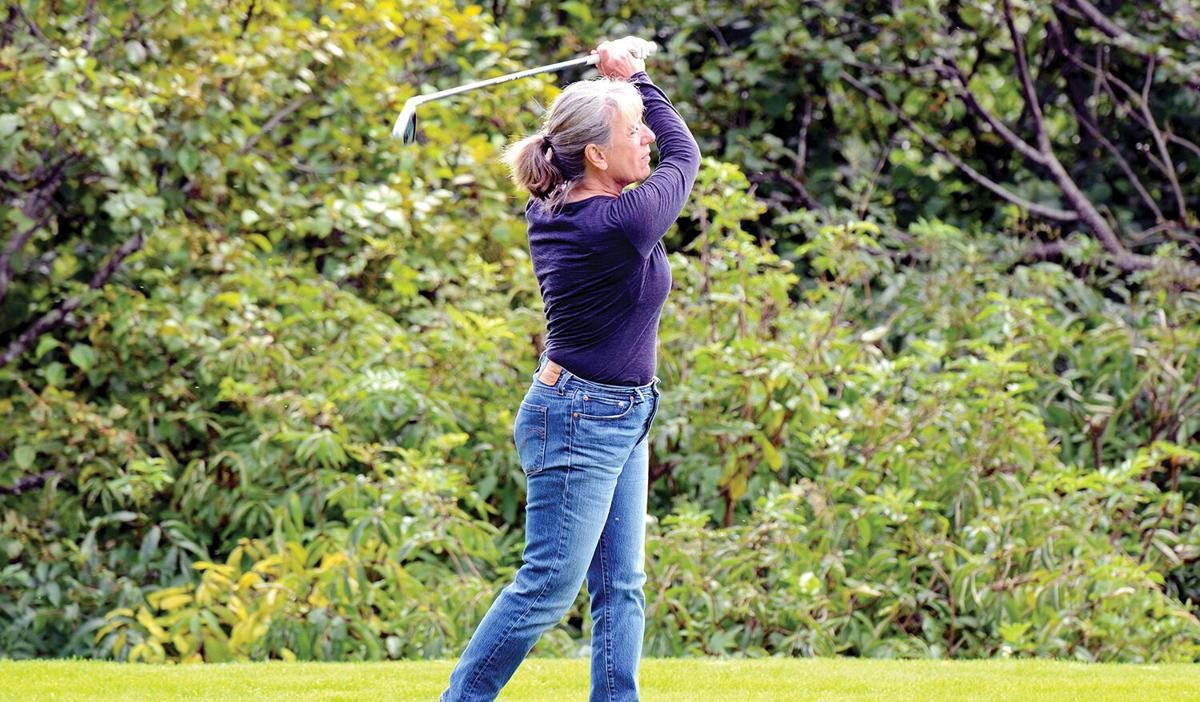 Darin Ruhl, the 2016 champion, reads the green on hole No. 8 during the 34th Kodiak Island Golf Championship Monday at Bear Valley Golf Course.

Darin Ruhl, the 2016 champion, reads the green on hole No. 8 during the 34th Kodiak Island Golf Championship Monday at Bear Valley Golf Course.

It was a good thing for Fred Barber that there was a day off between rounds of the 34th Kodiak Island Golf Championship. Otherwise, he might not have become the first four-time champion of the island’s most prestigious golf tournament.

The 36-hole tournament — a fundraiser for the Kodiak Morning Rotary Club — usually is staged over two consecutive days, but with unfavorable golf conditions on Sunday, the tournament was held Saturday and Monday.

“If it were on Sunday, I would have had to work, but I got today off,” said Barber, owner of Olds River Inn. “I’m sure my wife would have allowed me to come to play, at least since I was in contention. If I were way back in the pack, she would have told me to come to work.”

Barber overcame a one-shot deficit to first-round leader Darin Ruhl to win at Bear Valley Golf Course for the first time since 2010. The 56-year-old played consistent and steady golf — draining a few long-distance putts in the process — to card a 13-over-par 157. He had rounds of 83 and 74.

Barber’s fourth title comes 17 years after he won his first with a 150. He took the 2006 crown with a 151 and won again in 2010 with a 157. He entered this year’s championship tied with John Sullivan for most titles in tournament history.

‘It’s unbelievable, honestly. I can’t believe at my age I can still compete,” Barber said.

Barber came close to snagging his fourth title in 2013 when he finished second to Dustin Roberson by a stroke. Barber was third in 2014 and 2017.

The 2020 tournament was decided on hole 15 when Ruhl’s double-bogey handed Barber a two-stroke lead that he would never relinquish. However, Barber felt the tide turning in his favor earlier when he sunk a long bogey put on the 12th green — the par 4 third hole. After dribbling his tee shot up the fairway, Barber was lucky to escape that hole only down a stroke.

“That was the game-changer for me,” he said. “I felt like I had some good momentum then.”

Barber pulled even with Ruhl on the next hole and shot past him on the 15th — the par 4 sixth hole.

After sending his tee shot to the left and into the fairway of hole No. 3, Ruhl’s attempt to clear a tree on his second shot didn’t work. The ball caught the top of the tree and bounced straight down. He was forced to chip out from under the tree, which led to a double-bogey. Barber earned a par.

“Darin put himself in a tough spot there, and I actually took advantage of that,” Barber said.

Ruhl, the 2016 island champion, said he had hit that 54-degree loft shot over that tree many times. He just didn’t square it up when it mattered the most.

“I didn’t execute that one shot,” Ruhl said. “That was the tournament.”

Barber got a par on the next hole to increase his lead to three with two holes left. Even though Ruhl, who posted a tournament-leading 82 on Saturday, finished second with a 161, he was glad to see Barber make history.

“We are playing as individuals, but we want everybody to play well,” Ruhl said.

Barber and Franke Brown — playing in the final group for the first time — both entered the final 18 holes trailing Ruhl by a stroke. Brown played himself out of contention with a 43 on Monday’s front nine and finished fifth.

“Fred shot lights out today,” Brown said. “It was impressive to watch him play.”

The only downfall for Barber was that his father wasn’t at the course to celebrate the win. His father left last week after spending three weeks on the island. During that time, the two played a lot of golf. Barber’s dad was planning to play in the tournament before it got postponed a week.

“That was the disappointing part for me,” Barber said. “I would have loved for my dad to see that happen. He is going to be really happy when I tell him.”

Susan Schmeisser won her sixth ladies crown with a 207 — 35 strokes ahead of Tricia Griffing, the only other lady in the field.

“This is a good ending to the season,” Schmeisser said.

She said it would be nice to see more women golfers on the course. When Schmeisser started golfing in 1994, she said there were around 30 women golfers.

“I think we need to bring a professional in to give some instruction for new golfers, so they have the confidence to come out here and play,” she said.