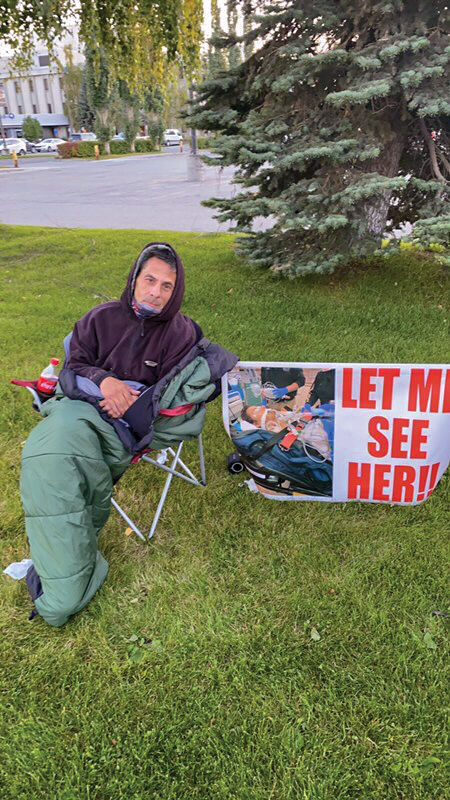 Marvin Abbott camps out in front of Providence Alaska Medical Center in Anchorage. 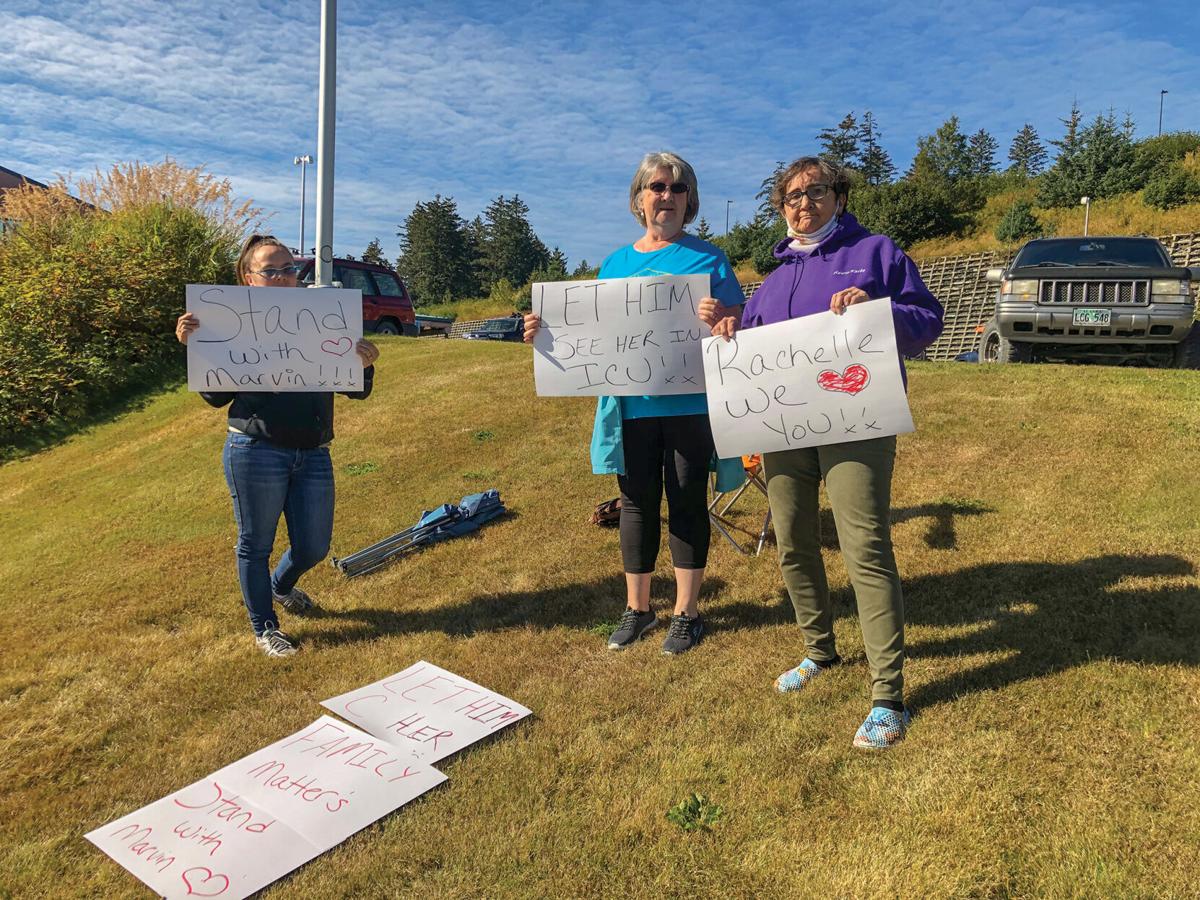 Marvin Abbott camps out in front of Providence Alaska Medical Center in Anchorage.

By Monday, Marvin Abbott of Kodiak had been camped outside Providence Alaska Medical Center in Anchorage for five days.

He is demanding that he be able to see his daughter, Rachelle, who is in a medically induced coma in the intensive care unit inside. She was flown from Kodiak to Anchorage on Sept. 6 after suffering a severe asthma attack.

“If anyone’s loved one is on life support, they should be able to go in and see them,” Abbott said.

“We should be able to follow the same guidelines as these doctors and go in and be with our loved ones. ”

Providence’s visitation rules, however, prevent him from going to the ICU. Due to the COVID-19 pandemic, no one is allowed in the ICU except in cases of imminent death, Providence spokesperson Mike Canfield said.

The hospital does have a group that meets every week to discuss visitation policies. But with 280 new cases of COVID-19 in the past seven days in Anchorage, along with three hospitalizations and two deaths, changes to the policy appear to be unlikely.

“Although many things are taken into consideration before making changes to our visitation policy, one thing that would need to happen is a reverse of the current trend of daily case rates, which show continued evidence of spread throughout the community,” Canfield wrote in an email.

And that might leave Abbott out in the cold. But he doesn’t plan on going anywhere.

“I’m going to stay here until I get inside or my daughter is dead,” he said.

Rachelle Abbott, 26, is seriously athsmatic, her father said. She lived on a commercial fishing boat and was working with cleaning chemicals indoors the morning of Sept. 6.

She started feeling unwell and asked to be taken to the emergency room. When she arrived, she had a bad asthma attack and collapsed on the floor of the treatment room. For the next six hours, staff at Providence Kodiak Island Medical Center struggled to keep her alive, pumping air into her lungs by hand.

They finally got her stabilized and called Abbott, who was able to be by her side for about four hours, he said. Providence policies do allow a visitor in the emergency room, which allowed Abbott to visit his daughter in Kodiak.

But she needed to be taken to Anchorage, where the hospital has better facilities to handle severe cases like Rachelle’s. The medevac team told Abbott he could fly with them, but later said he would not be allowed inside Providence Alaska Medical Center. The flight took off the evening of Sept. 6, but Abbot did not go with them.

He flew into Anchorage last Thursday afternoon, Sept. 10, after struggling all week.

“Monday, Tuesday, I made some calls. Wednesday I had a real bad day, and I was kind of depressed,” he said.

“Thursday morning I woke up, and I told my mom I have to go do something. I can’t just sit there.”

Abbott knew he couldn’t get inside the hospital. He didn’t know what to do, exactly.

“I had to make some kind of point,” he said.

He went to Bases Loaded, a screen printer in downtown Kodiak, and had them make a big sign that read “Let Me See Her!!” with a picture of Rachelle. Then he grabbed a sleeping bag and hopped on the plane.

He arrived at the hospital's lawn on the evening of Sept. 10, and he’s been camping there ever since, hoping to see his daughter.

Rachelle’s condition has not improved, Abbott said. She remains on a ventilator and in a medically induced coma. Anytime doctors try to bring her out, she struggles to breathe and has to be re-induced.

In the meantime, Abbott has attracted attention from others in Anchorage and Kodiak. Rachelle’s best friend, who lives in Anchorage, and her brother were the first to show up. Others have followed, some that Abbott knows and others he doesn’t. Many had seen a Facebook video Abbott posted on the morning of Sept. 11. It’s been viewed almost 50,000 times.

“There’s been a great outpouring of support,” Abbott said.

Abbott said he did not intend to come up and start a protest. Others who heard about his plight took up the cause for him, brandishing signs at home in Kodiak and on the sidewalk in Anchorage.

“I never in any way formed this. I appreciate all the help and support I’ve gotten, but that’s just a lot of people saying they’re tired of it too,” Abbott said.

He said there are at least five other people who are in a similar situation, wanting to see loved ones in the hospital. He said he didn’t think Alaska’s COVID-19 numbers were bad enough for him and others to be kept out of the hospital.

“I understand there’s the virus. But I don’t think the numbers warrant this.”