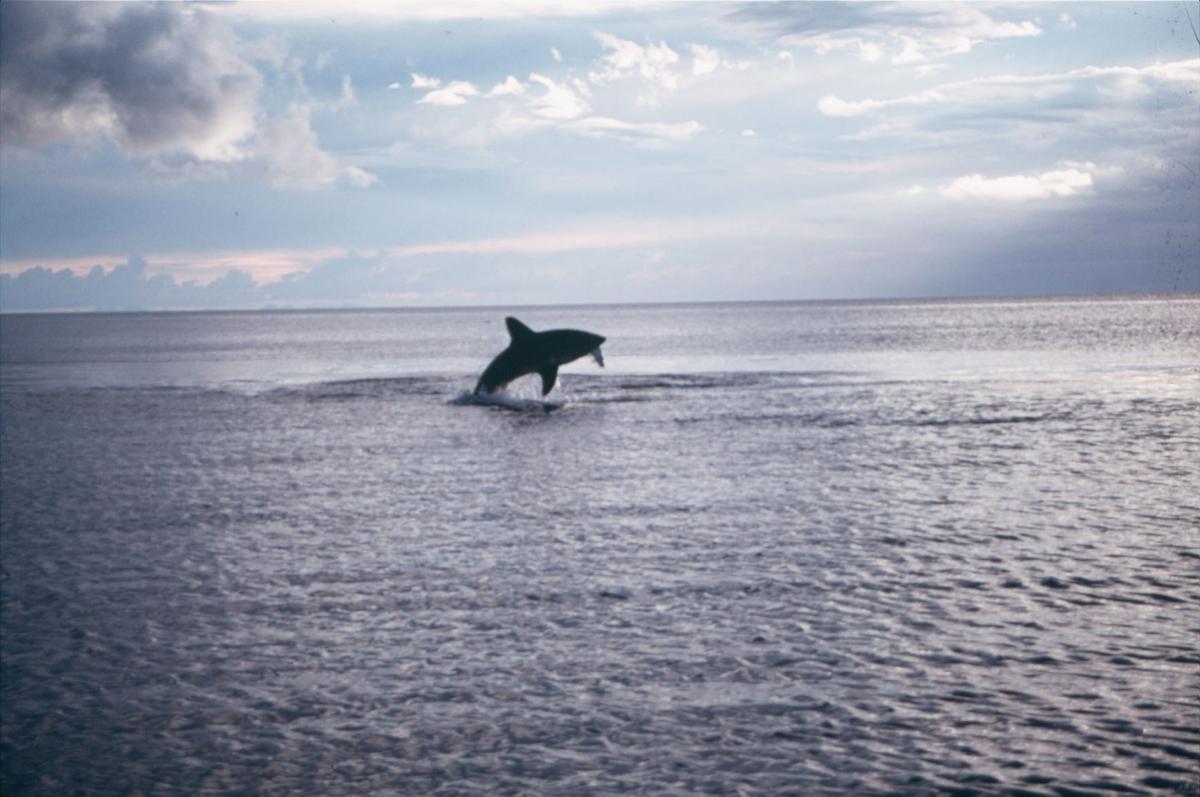 A salmon shark out of the water with a pink salmon in its mouth off Windy Bay/Hawkins Island in Prince William Sound. 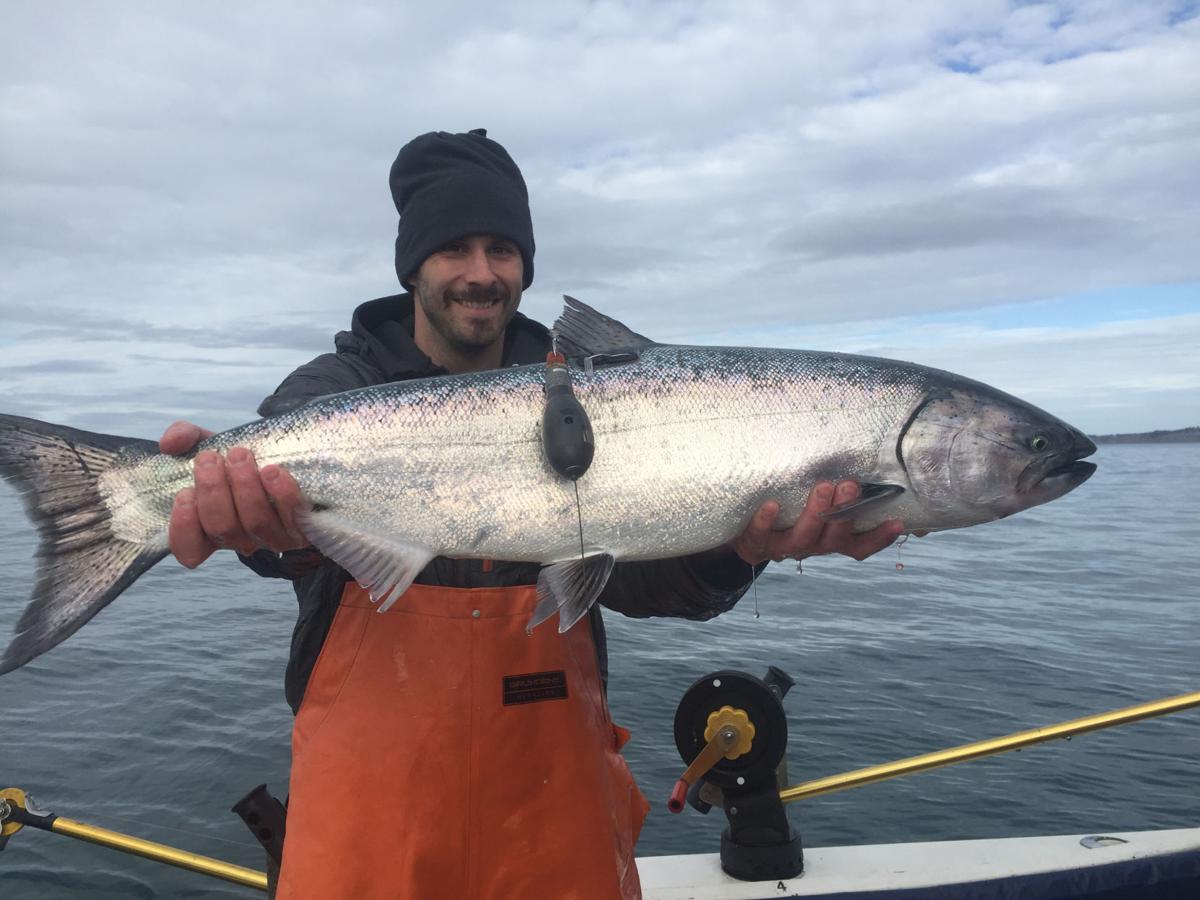 A satellite tag is attached to a Chinook salmon, where it collects data on temperature, depth and ambient light intensity.

A salmon shark out of the water with a pink salmon in its mouth off Windy Bay/Hawkins Island in Prince William Sound.

A satellite tag is attached to a Chinook salmon, where it collects data on temperature, depth and ambient light intensity.

Sometimes, being a scientist requires a bit of detective work.

Andy Seitz, a researcher at the University of Alaska Fairbanks College of Fisheries and Ocean Sciences, had to put on his detective hat when an alarming number of his fish tags started popping up to the surface of the ocean earlier than expected.

“At first, we speculated an equipment malfunction,” Seitz said.

Seitz and CFOS researcher Michael Courtney have been using pop-up satellite tags to study Chinook salmon since 2013. A satellite tag is attached to a fish, where it collects data on temperature, depth and ambient light intensity. On a pre-programmed date, the tag releases from the fish, pops up to the surface of the ocean and transmits its stored data to satellites that researchers can access from a computer.

Seitz and Courtney designed a project to determine whether the tags are an effective tool for studying Chinook salmon ecology and behavior while the fish are in the ocean. They are focusing on late-stage marine salmon that have spent more than a couple of years in the ocean. While a number of studies have focused on stressors for fish in their early stages in the ocean, few have focused on late-stage fish. The project was funded by the Arctic-Yukon-Kuskokwim Sustainable Salmon Initiative and the Pollock Conservation Cooperative Research Center.

“It has been assumed that the early stage in the ocean is more dangerous,” Seitz said, “and that fish become safer as they grow.”

But early in this project, Seitz and Courtney noticed a number of the tags were transmitting data much sooner than expected. Each tag is programmed with an “abort mission” sensor that is triggered when the tag is inactive for several days, telling the tag to automatically transmit data to satellites even if it’s before the programmed release date.

“So, we looked to the data to help figure out what might have happened,” Seitz said, as any good detective would do.

Seitz and Courtney had tagged big Chinook salmon off the coast of Dutch Harbor in December, at the suggestion of a local charter fisherman. These fish started collecting data in the winter, when temperatures in the Bering Sea are somewhere between about 39 to 43 degrees Fahrenheit. But, in many of these premature datasets, the researchers noticed a sudden spike in temperatures days before the data was transmitted.

“So we thought: okay, the fish are getting caught as bycatch, and are now riding around in the bridge of a ship,” Seitz said. “But the depth records of these tags were still moving up and down, sometimes down to 400 meters, and remaining at this 25-degree (77°F) temperature. The only place that can happen is in the stomach of a warm-blooded salmon shark.”

Seitz and Courtney speculate that after a shark ate a salmon, the tag would ride in the shark’s belly for about 2 to 5 days, when it would eventually be regurgitated and float up to the surface. A few days later, the data would be transmitted to satellites.

The researchers tagged 43 late-stage Chinook salmon between 2013 and 2017, and 35 of the tags transmitted data back to satellites. Salmon sharks consumed 14 of those tagged fish. Based on known stomach temperatures from previous research on fish and marine mammals, Seitz and Courtney determined that two other tags were on fish consumed by marine mammals, and another three were eaten by cold-blooded fish.

“Going back to our original project goal, these results do show that pop-up satellite tags are an effective tool for learning about Chinook salmon ecology and behavior — and mortality, too,” Courtney said. “There aren’t any other research methods that allow you to continue to collect data after a fish has been consumed.”

The data showed that after hatching in a river or creek, making the long journey to the ocean and spending two successful winters living in the ocean, about half of these older salmon were hunted down by predators, suggesting this phase in the life cycle of a salmon may not be as stable as originally suspected.

“We did a follow-up simulation to see if changes in demographics of Chinook salmon that we’ve been seeing in the past decade could be the result of increasing predation, and the answer is yes,” Seitz said. “The population is undergoing a lot of change that could be related to predators.”

Researchers have known for a while that Chinook salmon populations are changing, and have hypothesized that it could in part be due to mortality of bigger, older fish. But until now, no explanation or measured instance supported this hypothesis.

“This provides a mechanism for late-marine-stage mortality, and now we can begin to raise awareness of the importance of studying this stage,” Seitz said.

Seitz and Courtney are currently working on proposals to continue their studies. With additional years of tagging, the team can begin to consider how predation rates change from year to year or region to region, and can better understand what this means for Chinook salmon populations at large.

“The biggest data gap we currently have is that we’re lacking late winter, spring and early summer data,” Courtney said. Because temperatures get warmer during the spring and summer, it’s plausible that top predators like salmon sharks would travel north during these seasons, which could increase predation at this time of year.

“As a next step, we are interested in quantifying mortality throughout the annual cycle, rather than in bits and pieces, to create a more complete picture of how predation impacts these late-stage salmon.”

The House voted 23-16 to adopt a $4.2 billion budget in unrestricted general fund spending. It would be funded from taxes and Alaska Permanent Fund revenues.

This is the seventh month of haggling over a new three-year public employee contract. The next negotiating session is in early June. The current contract expires June 30.

Alaska Court System says motive for hack is a mystery

The Alaska Court System’s email is back online after a cyber attack.