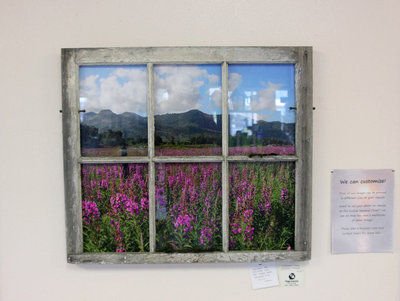 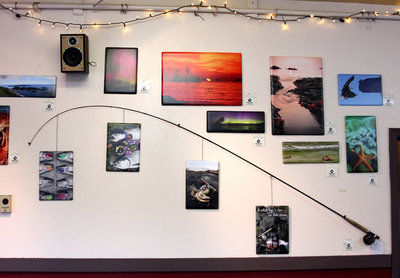 Dake Schmidt used a fly rod as a display for four of his images. (Photo courtesy Kadie Schmidt) 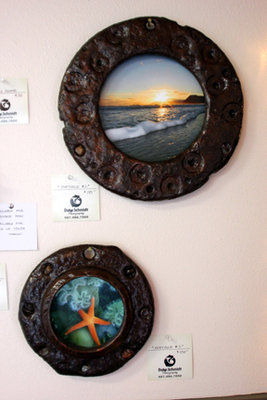 Dake Schmidt used old pieces of metal that looked like portholes as frames for some of his images. (Photo courtesy Kadie Schmidt)

Dake Schmidt used a fly rod as a display for four of his images. (Photo courtesy Kadie Schmidt)

Dake Schmidt used old pieces of metal that looked like portholes as frames for some of his images. (Photo courtesy Kadie Schmidt)

He found them in old windows and portholes.

That task, he reports, has been complicated by a scarcity of frame materials.

“I’ll never make a piece exactly like them again because you don’t have the same frame or the same looking portholes. They’re all originals,” Schmidt told the Mirror.

This is the fourth times his work has appeared there, and this time his gallery is a bit different.

“I have two, at least 60-year-old wood frames with original glass, original wood and even some moss that’s growing on a couple of the pieces,” Schmidt said. “Then I have my photo on the backside so it looks like you’re looking out an old school window or barn window at a really beautiful view.”

The frames were taken from a friend’s shed when the friend tore it down.

“I was lucky to get those,” Schmidt said.

The pictures within the frames depict mountain vistas with a field of fireweed in the foreground.

In a similar fashion, Schmidt used five circular pieces of rusted metal found on Mission Beach to frame some photos, including pictures of a beach sunrise, a starfish and a sunrise over a fishing boat.

“It actually looks like you’re looking through a porthole of a ship and getting whatever view it is,” Schmidt said.

All of the frames and metal pieces are in their original condition as he found then.

“Everything is reclaimed pieces and not touched up in any way other than cleaned up enough to be able to handle and sell,” Schmidt said.

All seven of his unique framed images are for sale, as well as a display made of a fly rod with four photos hanging from it.

Schmidt prides himself in the simplicity of his images and picture-taking and editing process.

“I don’t strip things out, I don’t put colors in, I don’t crop photos,” Schmidt said. “I don’t Photoshop anything; I color balance and sharpen things, but that’s the extent of it. It’s just a decent camera and filters and the right light.”

Schmidt’s photography at the Fly By is a little bit of everything — landscapes, animals, fish, boats, underwater scenes.

Wildlife is his preference.

He hopes to continue offering window- and porthole-framed photos, depending on the availability of the materials.

“I’ll try to keep working that angle if possible, but, it’s finding the frames, which is really difficult to do, and the other stuff, the metal, isn’t easy to get either,” Schmidt said.

"Without his vision and the visionary idea of what indigenous arts in Alaska could look like, we wouldn't be here now," said UAF Associate Art Professor Da-ka-xeen Mehner, the current director of the Native Art Center and chairman of the art department.

“The primary mission of it is to have an extra blanket or an extra resource for the dogs that have been dropped along the route,” Pomeroy said.