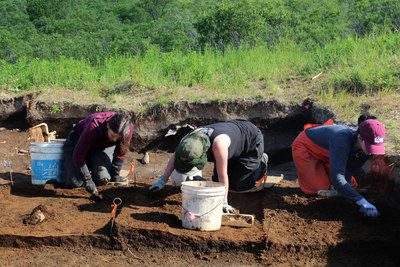 Community Archaeology participants excavate at the Amak site in Womens Bay during the 2012 dig by the Alutiiq Museum. (Nicole Klauss photo) 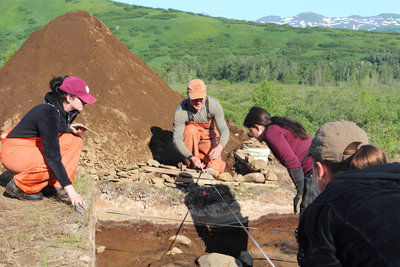 Community Archaeology participants excavate at the Amak site in Womens Bay during the 2012 dig by the Alutiiq Museum. (Nicole Klauss photo)

For three weeks, Kodiakans have the opportunity to participate in an archaeological dig with the Alutiiq Museum.

The Community Archaeology program by the museum is in its 18th year of recruiting volunteers to help excavate historic sites in the Womens Bay area. Through it, volunteers have helped excavate at eight different sites.

This year, they’ll be digging at the Kashevaroff site, located on the west side of Salonie Creek.

The Alutiiq Museum has dug at the site before. Patrick Saltonstall, the museum’s Curator of Archaeology, uncovered the front room of a two-room house with a fire pit and many ulus in it.

“He believes the site was probably a fish camp at least 300 years ago,” said Amy Steffian, the museum’s director of research and publications. “Underneath that, he started to find very ancient material, and we’ve just begun to excavate the lower part of the site that he thinks will date back to probably over 7,000 years ago. That’s what we’re going back to learn more about this year.”

The volunteers join some of the Alutiiq Museum’s staff and interns on the dig.

During the orientation and presentation on Thursday, Saltonstall, the leader of the dig, will talk about the history of the site to be excavated, as well as times and schedules of other digs.

This particular site has been excavated before, but this time, Saltonstall will be moving into a new area of it.

Volunteers will also receive daily orientation on site directing them where to go, proper technique, how to use different tools and how to move carefully through the site.

Through this program, the Alutiiq Museum has removed many artifacts that are now part of their collections.

“We use (the program) as a means of learning more about Alutiiq occupation of the Womens Bay area,” Drabek said. “We know an awful lot about Alutiiq human history in this particular area going back 7,500 years.”

After the dig ends, there’s another week of processing the found artifacts, cleaning and cataloging, that volunteers will help with as well

No experience is necessary, but participants must be at least 14 and should expect to get dirty.

Call Brian Fraley at 486-7004 to sign up. The site can only accommodate a limited number of people per day.

After several years of budget cuts, the Alaska Division of Parks and Outdoor Recreation no longer has enough staff at its Northern Region office to maintain the Chena River State Recreation Area shooting range.