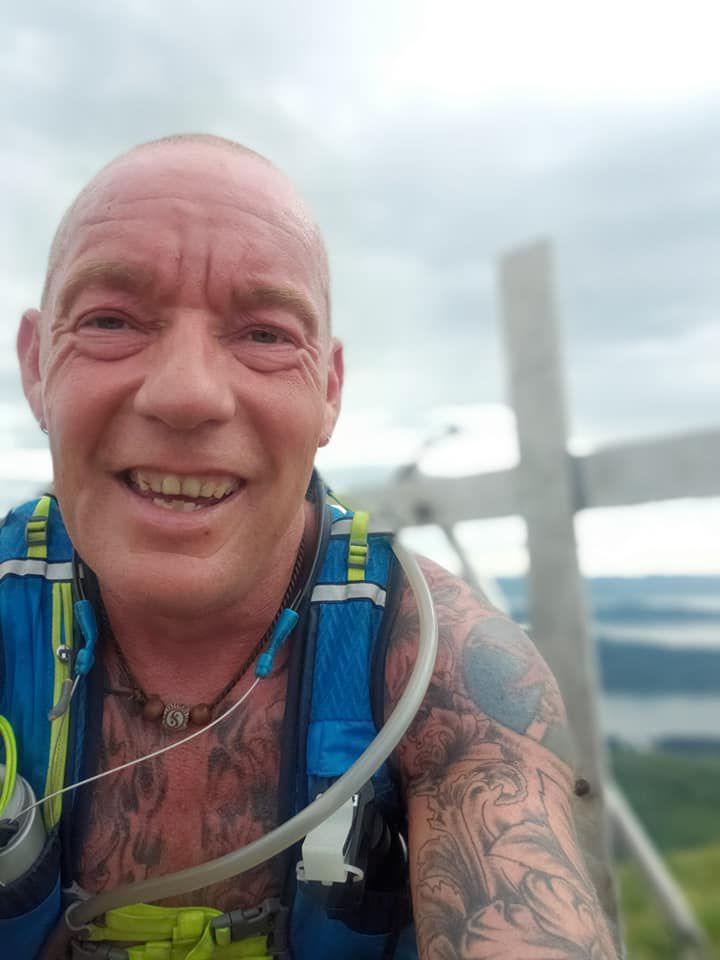 Todd Murdoch completed the seven summits of the Discover Kodiak’s Adjust Your Altitude challenge in a record time of 13 hours, 30 minutes on July 3. 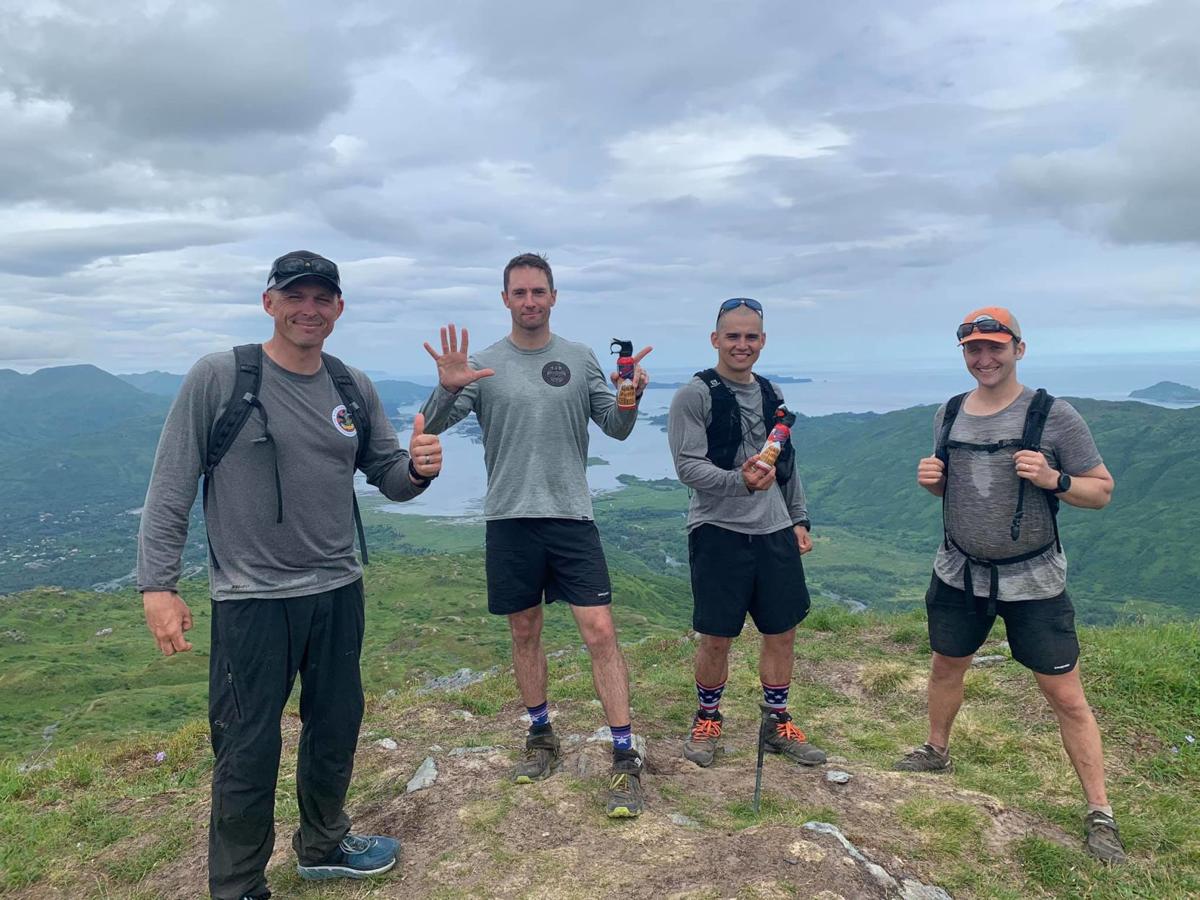 The group of Bradley Pigage, Jake Pritchett, Nick Gilmour and Jessie Jacobson completed the seven summits of the Discover Kodiak’s Adjust Your Altitude challenge on July 3.

Todd Murdoch completed the seven summits of the Discover Kodiak’s Adjust Your Altitude challenge in a record time of 13 hours, 30 minutes on July 3.

The group of Bradley Pigage, Jake Pritchett, Nick Gilmour and Jessie Jacobson completed the seven summits of the Discover Kodiak’s Adjust Your Altitude challenge on July 3.

When reaching a summit, Todd Murdoch doesn’t bask in the achievement but instead limits himself to 3 minutes at the peak before descending back down the mountain. Just enough time to take in the breathtaking scenery, pose for a selfie and call his wife — if there is reception.

That kind of time management propelled Murdoch to an incredible, history-making feat last Friday, the day before the Fourth of July.

The 46-year-old Kodiak resident summited all seven peaks in the Discover Kodiak’s Adjust Your Altitude challenge in a blistering — in more ways than one (more on that later) — 13 hours, 30 minutes.

Murdoch’s time is the fastest recorded in the second-year challenge, zooming past the efforts of Kodiak running icons Levi Fried and Keith Osowski by 15 minutes.

Establishing a new mark for the popular summer challenge — which typically takes hikers a summer to complete — didn’t enter Murdoch’s mind until bumping into veteran island runner Howard Valley, who completed the 24-hour challenge last season,  on peak No. 5.

“He told me what the time to beat was,” Murdoch said.

Murdoch closed out the final two mountains — Kasheveroff and Heitman — in just over 3 hours.

“Now that the time is posted publicly, I think people will be trying to beat it,” Murdoch said. “I may try to defend it if it gets beat.”

What is even more astonishing is that Murdoch — a man who overcame a drug and alcohol addiction 14 years ago — just started running in May 2019 when he arrived on The Rock from the Kenai Peninsula, a place where he called home for two decades.

His family — wife and daughter — remained in Kenai, while Murdoch transitioned to his new job at Carlile Transportation.

“I didn’t know anybody and didn’t have anything to do,” Murdoch said. “I didn’t have TV and lived in my camper.”

So, he started running on the vast amount of Kodiak trails, documenting his paths on short video clips and running apps. Trail running then turned to mountain running, with the end goal of being Juneau’s Nifty Fifty 50-kilometer race in August. That event was canceled because of the COVID-19 pandemic, so he shifted his focus to reaching Kodiak’s seven summits — Monashka, North Sister, Barometer, Pyramid, Sharatin, Kashevaroff and Heitman mountains — in 24 hours.

He had conquered all of the mountains before, but never in one day.

“This was my shot to push myself,” said Murdoch on Tuesday, four days after the epic solo adventure. “I’ve never done anything like this.”

His time would have been faster, but he spent time looking for a lost can of bear spray on the first mountain, Monashka. He didn’t find the spray, so he returned home to grab another can. Luckily, he didn’t have to use it — the only animals he saw were goats on Sharatin.

“There is part of me that thinks I could have cut off another half an hour,” Murdoch said.

He started at 6:20 a.m. and reached the peak of the first mountain 52 minutes later. After Monashka, he completed North Sister, Barometer, Pyramid, Sharatin, Kasheveroff and Heitman, finishing at 8:22 p.m.

Everything was smooth until Sharatin, the fifth peak. He forgot to power up on Tailwind Nutrition Endurance Fuel and peanut butter and honey sandwiches before tackling the 5.1-mile, 1,948-foot elevation gain mountain.

“After Sharatin, there was no energy,” Murdoch said. “I almost gave up.”

While  Murdoch was flying solo, a group of four Coast Guard rescue swimmers were also attempting the 24-hour challenge.

“It was cool to watch him,” Pigage said. “It was an incredible feat, for sure.”

Reaching all seven summits in 24 hours had been on Pigage’s to-do-list since arriving on the island three years ago. A triathlon competitor, Pigage morphed into a trail and ultramarathon runner. With minimal races in Kodiak, he turned to mountain time trials, conquering Barometer in 42 minutes — 30 up and 12 down.

“I don’t recommend that to anybody,” Pigage said. “When I came here, I was in running shape. I couldn’t make it up in 30 minutes anymore.”

The hot, muggy weather zapped the hikers in Pigage’s group as they tunneled through tall grass, overgrown salmonberry bushes and Pushki. They still finished the seven mountains and covered 27 miles in just over 14 hours.

“We were all pretty spent by the time we got to the top of Heitman,” said Pigage on Tuesday. “We are all recovering now — it might be another few days before I travel up another mountain.”

Pigage ended up with blisters on his legs from rubbing against Pushki, while Murdoch’s feet were covered with blisters from not replacing his wet shoes with a dry pair.

“I didn’t take time to take care of my feet, which was a mistake,” Murdoch said.

Murdoch grew up in Anchorage and stuck a needle in his arm when he was 14 and a student at Dimond High School. His life revolved around drugs and alcohol after that. He sought treatment for 12 years straight before he was finally able to kick the addiction.

Now, he runs over 30 miles a week while soaking up the Emerald Isle’s beauty.

“I was an overweight drug addict; now, I get to do this. If we get clean, we get opportunities to do amazing things,” he said. “I couldn’t ask for much more of a life than the one I have now.”

Amid the virus outbreak, home school programs are growing in Fairbanks

Kim Bergey, program director of Raven Homeschool, said pre-pandemic enrollment of about 1,900 students is now approaching 4,000, and they are hiring.

“After reviewing in detail all of the federal unemployment aid options presented to me and my team, choosing to give $300 more per week allows us to use the state’s unemployment trust fund and helps us to best serve Alaskans ..." Dunleavy said.