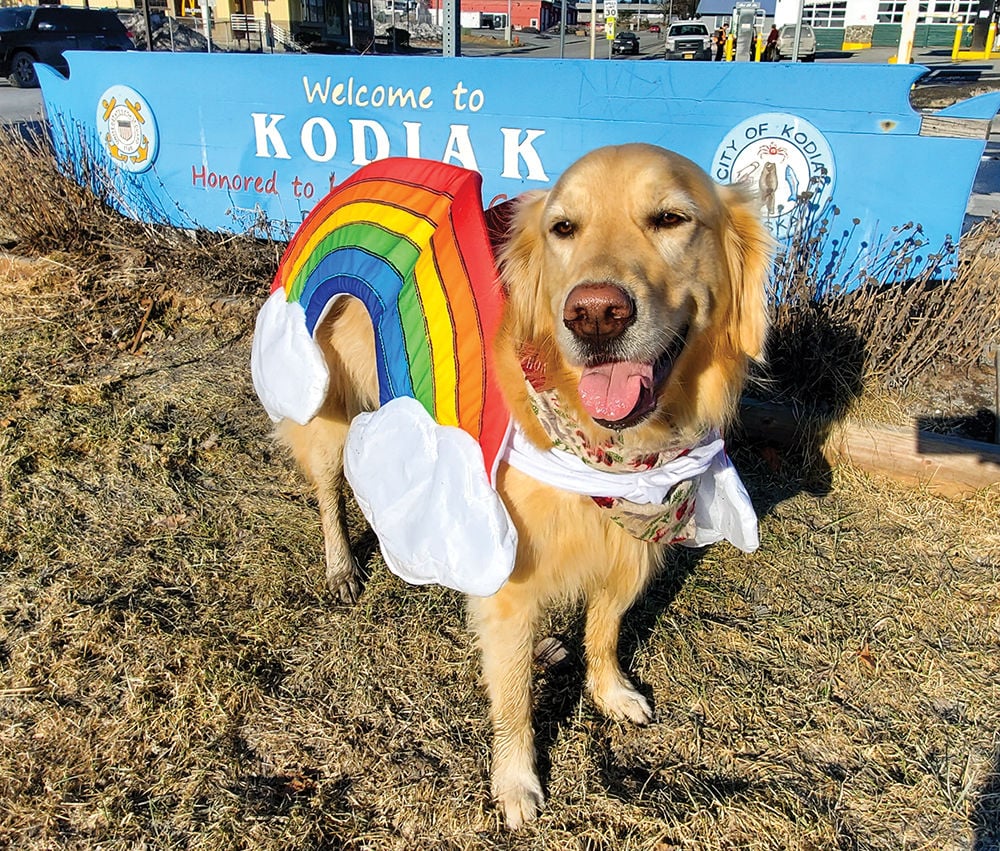 Hoagy, with her rainbow costume, stands in front of the “Welcome to Kodiak” sign in downtown Kodiak. 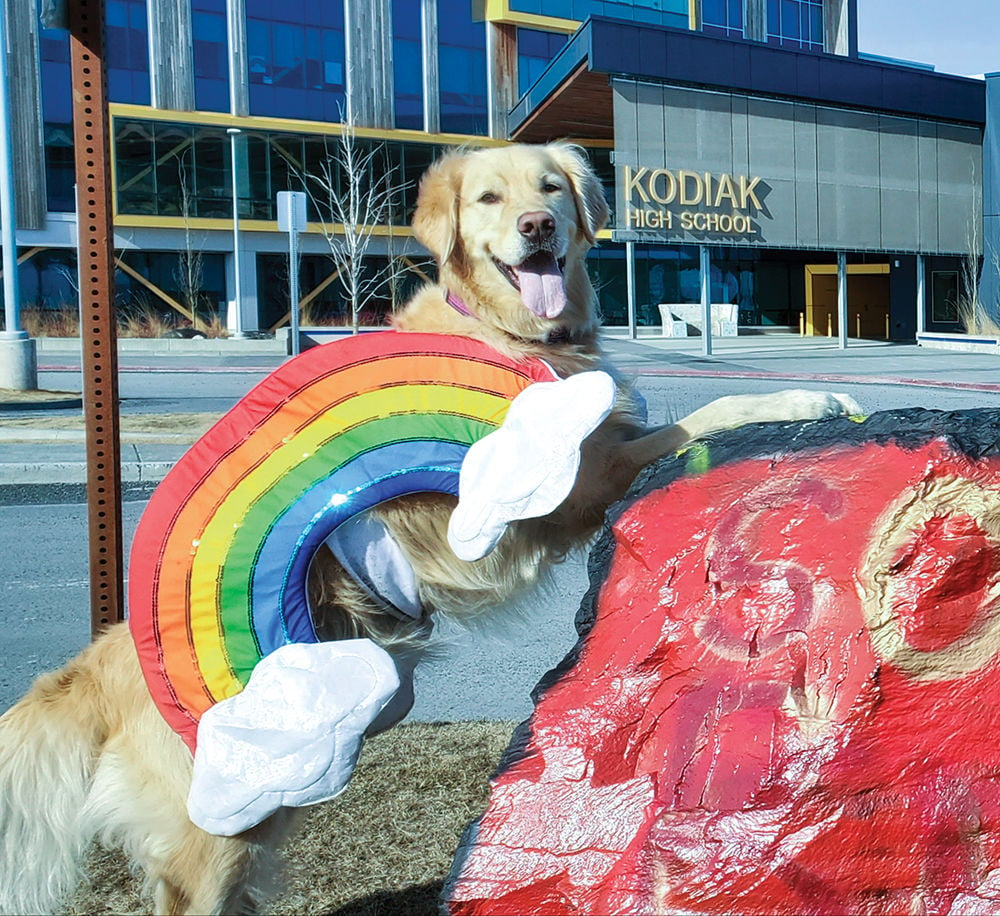 Hoagy, with her rainbow costume, stands in front of Kodiak High School.

Hoagy, with her rainbow costume, stands in front of the “Welcome to Kodiak” sign in downtown Kodiak.

Hoagy, with her rainbow costume, stands in front of Kodiak High School.

Hoagy is the gold at the end of the rainbow.

The 4-year-old golden retriever has risen to celebrity status with her “rainbow walks” that brighten the Kodiak community during this time of uncertainty.

On a whim, six months ago, human owner Michael Vinson bought a clearance rainbow costume at a local store. The vivid colors — red, orange, yellow, green, blue and indigo (this rainbow is missing the violet stripe) — are connected to marshmallow-like clouds.

When rainbows started to color windows in Kodiak after the coronavirus outbreak, Vinson dug the costume out and draped it over Hoagy.

Vinson and his newly minted wife, Tiffany Tang, have paraded Hoagy around town multiple times, taking photos of the tongue-dangling dog at businesses and then uploading the pictures to the Friends of Kodiak Facebook page. Recently, Hoagy has been leaving her pawgraph — rainbow-painted paw print rocks — at the locations she has visited.

“We got such praise from the community,” said Vinson, a flight weather forecaster for the Coast Guard. “People come out of their houses and cheer at her. People honk and wave. Some people have stopped and asked for a picture.”

Hoagy’s sole purpose on Earth is to make people happy. Vinson found that out when he picked her from a litter while he was stationed in Maine. People repeatedly told Vinson that seeing his puppy, which was born in Boston, was the best part of their day. Vinson knew his pup had a calling.

In Hoagy’s first year, Vinson and Tang groomed the pooch to be a therapy dog through positive reinforcement.

“Every hello that we met on the sidewalk was a training opportunity,” Vinson said.

When Hoagy turned 1, she was evaluated and became an official therapy dog. Vinson and Hoagy are registered through petpartners.org.

“I call her a golden golden,” Vinson said. “From Day 1, all she wants to do is what is right.”

During her stay on The Rock, Hoagy has made monthly visits to the Elder House — a long-term care facility for those who are unable to live independently — and has been a presence on the Coast Guard base as an asset for the Critical Incident Stress Management program. She also has livened up the barracks, on occasion.

“There is a gentleman there (Elder House) who is a stroke survivor,” Vinson said. “He would lower his bed, and Hoagy would gently crawl in the bed with him and she would just lay there while he petted her. She would just vibrate because she was so happy and excited to do it.”

Then there was the time she brought joy to Coast Guard members who were meeting after a shipmate died. Hoagy rolled over on her back, belly up, and stretched out.

“There were some tears, but then there were a couple giggles happening at the same moment,” said Vinson, who is transferring to Rhode Island at the end of May.

Although it didn’t take off on the island, Hoagy has also been part of a read-to-me program for kids who struggle to read.

“She doesn’t care if they read slow, fast or mispronounce a word,” Vinson said. “It just calms them to make reading a positive thing.”

Vinson doesn’t mind that Hoagy gets all of the attention. He ranked the dog ahead of his wife and boat in his “top choices in life.”

“She deserves every bit of it,” he said. “I like to see how happy it makes her to make people happy.”

Hoagy does do usual doggie stuff, like swimming, gazing at water for hours, watching “Secret Life of Pets,” hanging out at the Kodiak Island Brewery Co. and eating pink — red on special occasions — salmon every day.

“I bought a brand new Ford F150 with vinyl floors, not carpet because of the dog,” he said. “She is always getting wet and muddy.”

When Vinson was a young lad in Ohio, he visited an aunt in Florida who had golden retrievers. At the same time, he was reading Jimmy Buffett’s book, “Where is Joe Merchant?” The main character — a seaplane pilot — in the book owned a golden retriever named Hoagy.

Coming from a lab family, Vinson’s mom vetoed any attempt of a golden puppy entering the house. To which Vinson replied, “I will own a golden retriever named Hoagy one day, I promise.”