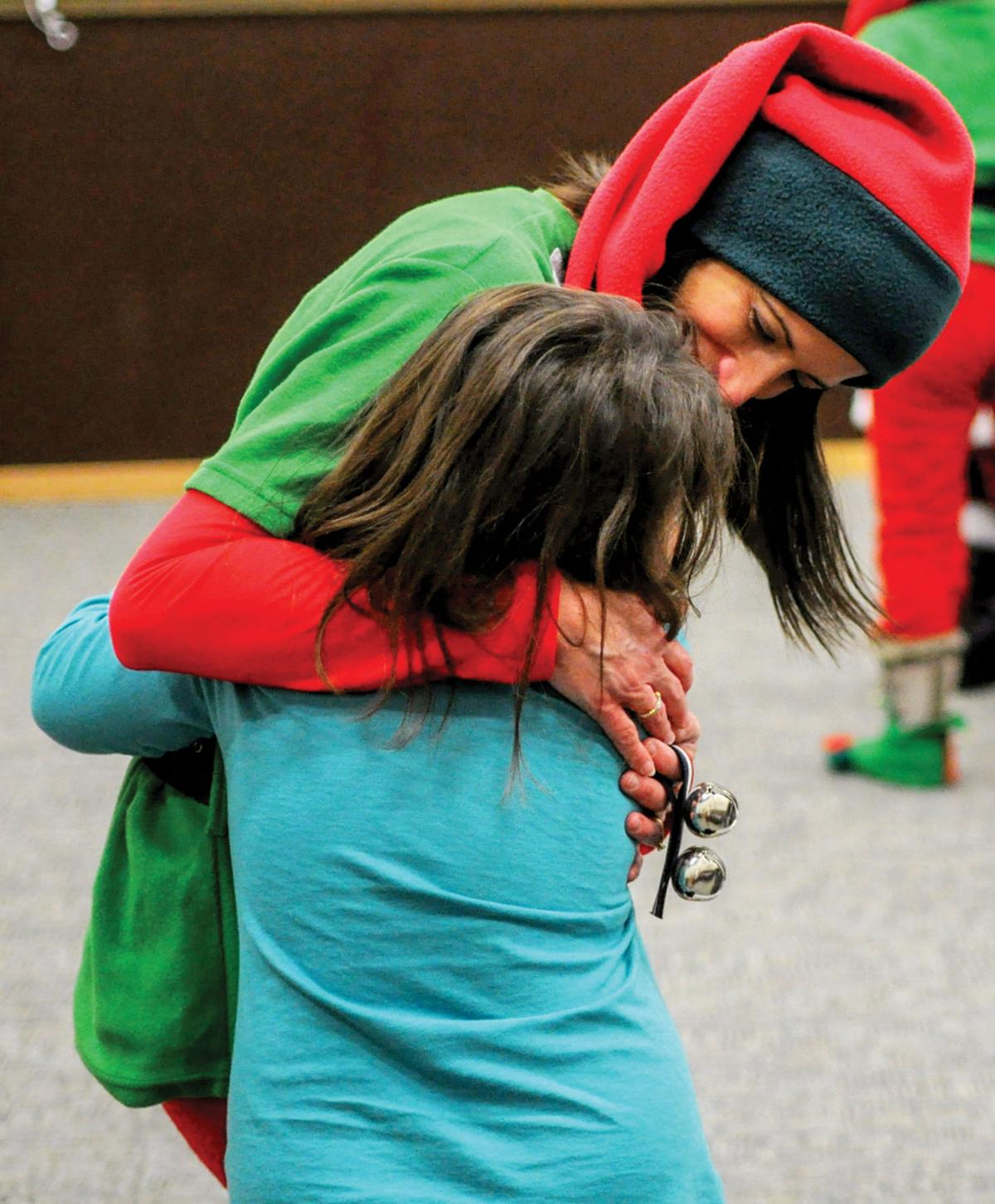 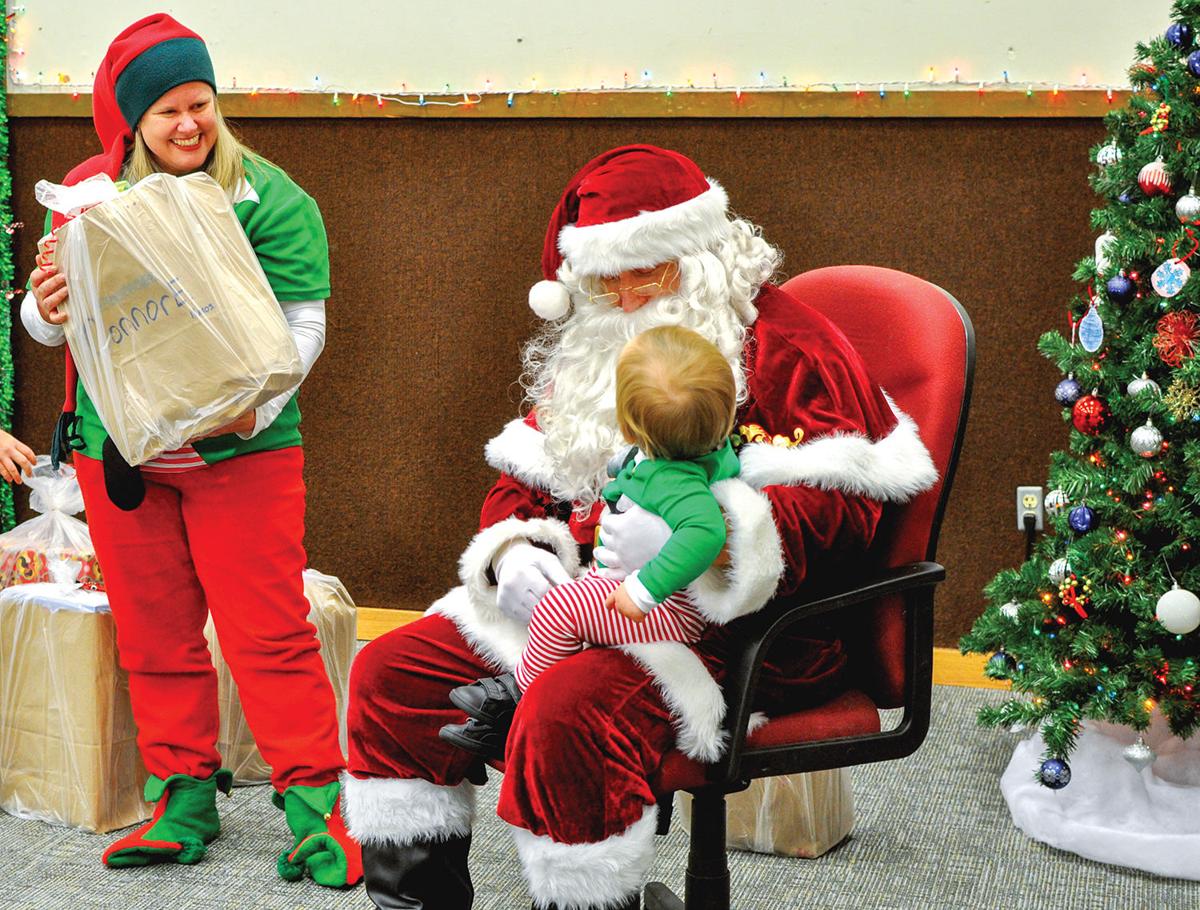 Scott and Kimberly Powers hand out gifts in the Akhiok school gym. 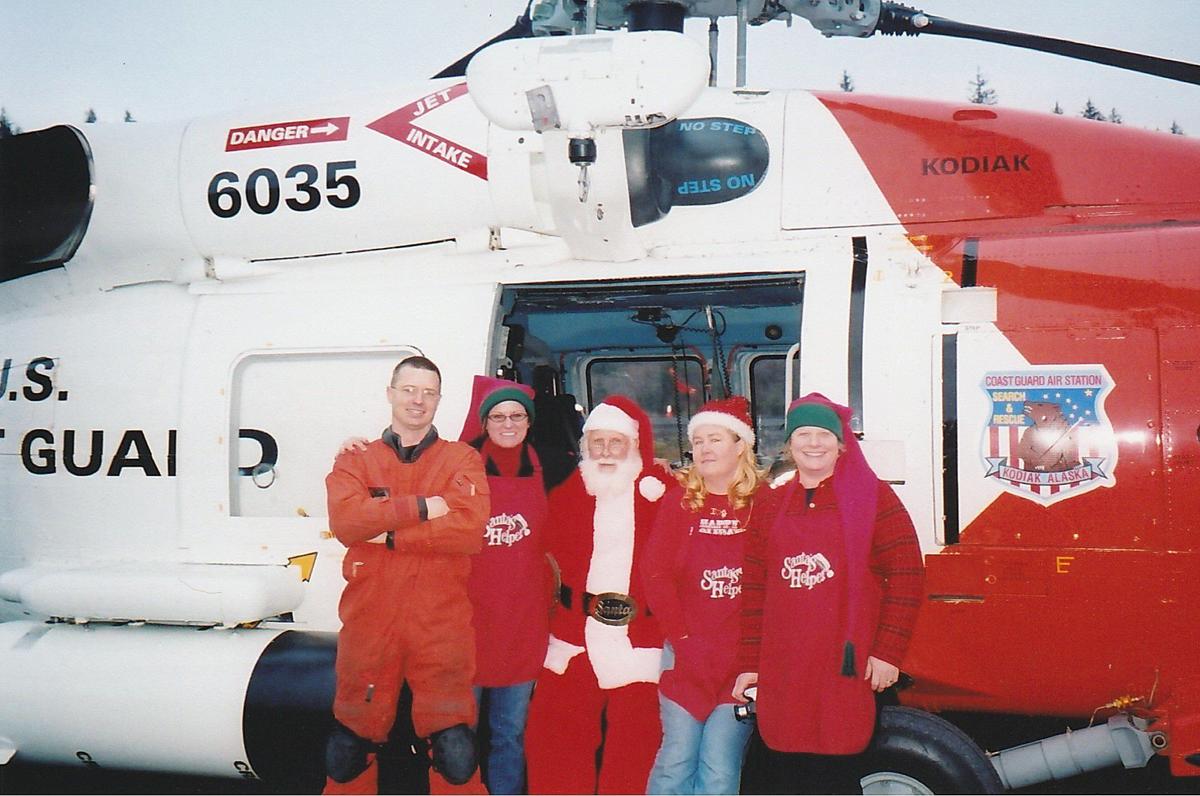 Courtesy of the Long family 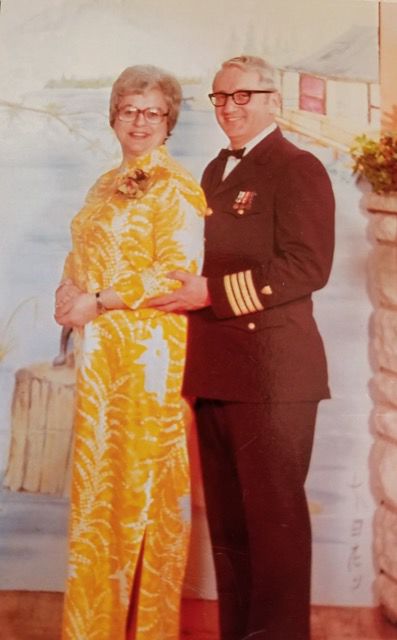 Courtesy of the Clark family

Santa to the Villages founder Jane Clark with her husband, Capt. Charles Clark. 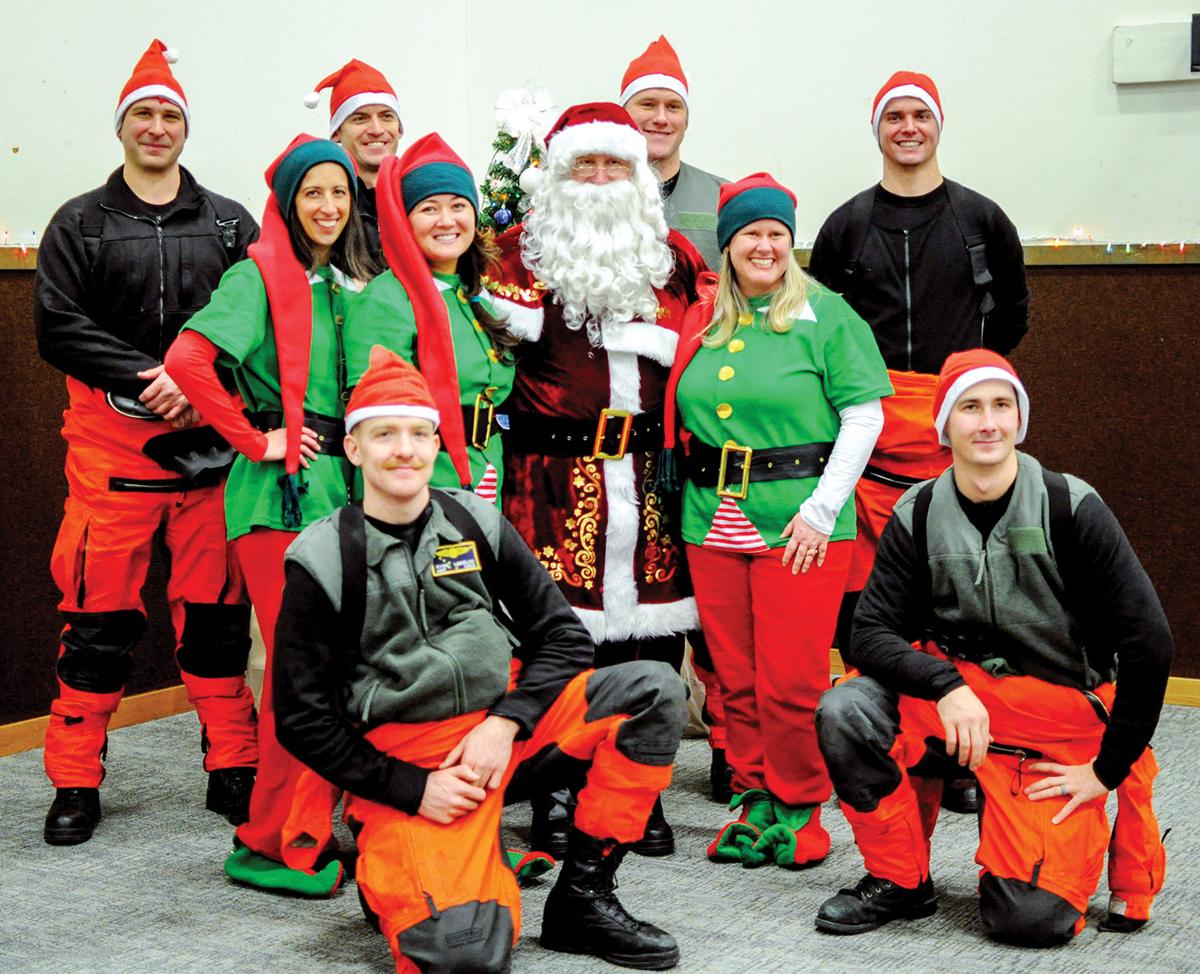 Coast Guard members and spouses pose for a photo.

Scott and Kimberly Powers hand out gifts in the Akhiok school gym.

Courtesy of the Long family

Courtesy of the Clark family

Santa to the Villages founder Jane Clark with her husband, Capt. Charles Clark.

Coast Guard members and spouses pose for a photo.

It was Powers’ first time as Santa, but he was a natural. When the helicopter landed in Akhiok, a village of fewer than 70 residents on the southern end of Kodiak Island, Powers greeted an excited group of children with a cheerful “ho ho ho!”

Most days, Coast Guard members in Kodiak are busy with maritime patrol and search-and-rescue missions. But for a few days of the year, Coast Guard pilots transform in Santa Claus, and Coast Guard helicopters become Santa’s sleigh, for a mission called Santa to the Villages.

The mission has been part of the Coast Guard Base Kodiak tradition for more than 40 years. It began in 1974, when a pilot noticed that children in Kodiak’s remote villages had limited opportunities to interact with Santa and receive gifts.

Since then, the Kodiak Coast Guard Spouses’ Association has taken the lead on the project. They spend the year gathering gifts, and when it comes time to fly to the villages, they join the flights as Santa’s elves.

Every December, Coast Guard helicopters carry teams of Santas and elves to seven  communities on the island of Kodiak — Ahkiok, Old Harbor, Port Lions, Ouzinkie, Karluk, Chiniak and Larsen Bay. At its height, gifts were delivered to around 400 students across the island. But dwindling village populations have led to smaller deliveries. In total, this year’s trips will bring gifts to around 150 students from birth to age 18, and 35 teachers employed in village schools.

For some kids, the joy is almost too much. In Akhiok, children of all ages hugged Santa tightly, and eagerly awaited their turn as he called them up one by one. The elves gave them gifts hand-selected by the members of the spouses’ association.

“It’s pretty fun to have little kids run up to you and just give you a hug,” Powers said, reflecting on his role as Santa. “One girl wanted a Barbie. Watching her open the Barbie — I had to take a second to compose myself. It was pretty amazing.”

While Coast Guard pilots play the vital role of getting the gifts to the villages, Powers says most of the credit should go to the spouses’ association.

“It’s their mission,” he said. “It’s a wonderful service that they provide to the communities around Kodiak Island.”

Powers’ wife, Kimberly, served as the head elf on the flight to Akhiok. She has been a Coast Guard spouse for 20 years. She said that every place she has been stationed, she has sought out the spouses’ club.

“It’s a nice connection when I move to a new place,” she said. “When I moved here, I jumped right in.”

While Kimberly has been a member of many spouses’ associations, she said the Kodiak project is unparalleled. Every year, the Coast Guard commandant has to approve the flights.

“This is unique, the one and only,” she said.

The elf team also included Joellen Schiber, who has been married to a C-130 pilot for 16 years, and Sarah Knaup, who married a C-130 pilot earlier this year.

“There’s nothing that gives more joy than giving to others and seeing the joy on their faces,” Schiber said. “Being able to see the joy on the kids’ faces today was amazing. That made my Christmas.”

The spouses spend hours preparing for the flights each year, fundraising and shopping for gifts (usually capitalizing on the after-Christmas sale at the local Walmart). The gifts are selected for each child by age and gender. Gifts include typical items you might expect under the Christmas tree, such as Lego, makeup, books, and hand-knitted hats and gloves.

They also include items that many of us take for granted — fresh oranges and apples, and toothbrushes and toothpaste. In villages that lack grocery stores and where all food is locally grown, fished, hunted, or brought over by plane, these items are often just as exciting as a new Barbie doll.

Also on the flight to Akhiok was Petty Officer Third Class Sean Long, an MH-60 technician. Long is likely the first third-generation participant in Santa to the Villages. His grandfather, Norman Cox, a former Coast Guard member, flew as Santa in the early 2000s, together with Long’s mother, a Coast Guard spouse, who joined the flight as an elf.

“My grandpa did 25-plus years in the Coast Guard. He’s always been the Santa Claus guy. He’s got the full suit and a real beard,” Long said. Growing up, Long’s father, a Coast Guard helicopter pilot, was stationed in Kodiak. His mother was involved in the spouses’ association, and she recruited Long’s grandfather to fill the role of Santa.

“It was very humbling for my mom and my grandpa to be able to go out to the villages. Some of the kids — they were happier about the fruits than they were about the toys. It’s a different experience to see the things they appreciate,” Long said.

When the opportunity came along for Long to participate in Santa to the Villages, he did not hesitate.

“Once you actually get down there, meet the people, see how appreciative they are of the effort that we put in — it’s another day at work for us … but seeing how much it means to them, it’s pretty special,” he said.

Starting in 1976, Santa to the Villages was led by Jane Clark. A Coast Guard spouse, She began coordinating the project during the three years that she and her husband, Capt. Charles Clark, were stationed in Kodiak, and continued to coordinate the project from their home in Washington state long into their retirement. Clark passed away in July, at the age of 88.

“Even after she transferred out of Kodiak, she made sure it still happened from wherever she was stationed,” Kubicki said. “She is the reason it is still so strong today.”

When Clark left Kodiak, she continued to knit hats and gloves to send to the villages. Over the years, people from across the country have received word of Clark’s project and have contributed knitted items, sending them to Kodiak by mail, where they are stored until they can be sent to the villages.

Gifts are stored in the Kodiak base barracks, where a room has been designated as “Santa’s Workshop.”

Funding for gifts comes from the Stiles-Clark auction held every fall in Kodiak. The auction is named for Jane Clark and Lt. Cmdr. Jim Stiles. Stiles, a Coast Guard pilot, first came up with the idea of the Coast Guard bringing gifts to village children in 1974, when he was stationed in Kodiak. Stiles died in a helicopter crash near Cape Cod in 1979.

This year, the 37th annual Stiles-Clark Auction, organized by the spouses’ association, raised more than $30,000. The Santa to the Villages gift budget is $5,000, leaving a big chunk of money that the association gives out to Kodiak students and nonprofit organizations each year in the form of scholarships and grants.

Akhiok resident Alyssa Brenteson said she is appreciative of the effort that goes into Santa to the Villages each year. The arrival of Santa each December marked a special event in Akhiok. Community members cook food and prepare desserts to welcome Coast Guard personnel.

“Over the years, my understanding of it has changed a little bit. When you’re a kid you just know that Santa comes to your village in a helicopter,” she said. “Now I know about all the fundraising that goes on and it makes me very thankful that the spouses’ association provides this service to the community.”

This year was special for Brenteson — the first time her son had the opportunity to meet Santa in Akhiok. He’s only 11 months old, and has 17 more years of Santa gifts to look forward to.

“It’s an event that’s looked forward to by the entire community,” she said.