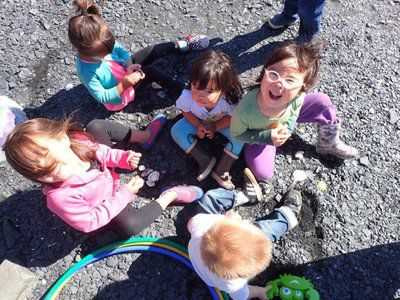 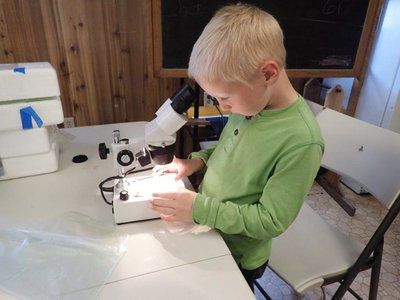 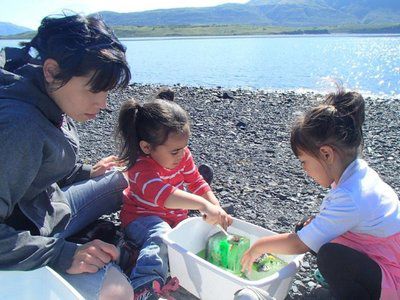 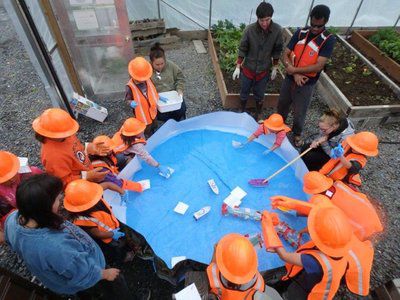 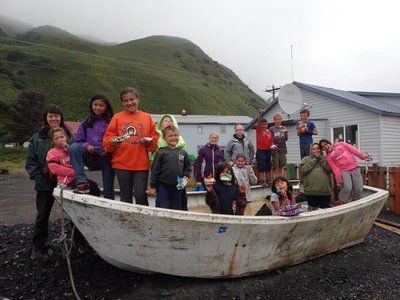 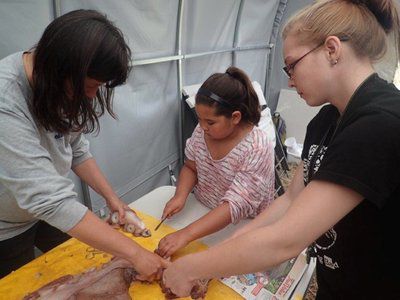 Remember those summer days at camp when so much was happening all in one week that it all became a blurr in ones head? Actually, my first summer camp on the beach was in High School and unfortunately it had nothing to do with Marine Science. The only planned activities there were soccer games, which you had to watch if you were not playing.

Last week in Old Harbor kids had a very different experience. During the second annual Old Harbor Marine Science Camp, kids learned through numerous activities about the intertidal, biology of the animals there, plankton, currents, the deep sea, and bioluminescense. Between beach exploration and lessons there were plenty of games to “get the wiggle out” and there were numerous art activities to let the creative juices flow.

The youngest group consisted of eight preschoolers and the goal here was to introduce activities where the kids could feel and touch things associated with the ocean. There was the beach walk on day one with many tide pools to get little hands into and hold sea stars or let hermit crabs crawl on you. There were games to learn the names of different shells like clams, cockles, jingles, snails and more. You could paint and draw on the clam shells and cockles and find out how your pen wanted to go certain directions as it followed the growth lines of the shell. Then there was the frozen ocean activity where you got to add things that you imagined to find in different layers of the ocean, each layer then getting frozen. Later in the week, we would pull the icy blocks out of the freezer, mix them up, and let the kids melt the ice and discover what treasures other kids had frozen into their icy oceans. There were also kits to make beach cookies or sea urchins out of clay, fill clam shells with soap or make clam candles. Jellies were made out of jello and decorated with fruit leather strips. I never got to see those because the kids ate them before I had a chance to come and look.

While preschoolers only attended camp in the morning, everyone already in Kindergarten, first or second grade and the big kids in third grade and up stayed all day until a family dinner was shared at five. Every day had some outdoor activities and some indoor activities and some were science based, some were art projects and one was an oil spill cleanup activity. After exploring the animals on the beach on day one, and concluding the day with a lesson about cold water and boat safety, day two was about plankton. Kids built their own plankton nets and went out in the pouring rain to gather some samples with their nets near the beach. When the older kids set out sampling in the rain, they had the great idea to wear garbage bags to prevent getting soaked and had a lot of fun preparing a garbage bag raingear fashion show. Luckily, it was only one day that hard rain dampened the camp and the rest of the week was sunny, mostly.

Everyone became really attentive learners and listeners when it was time to look at the plankton samples under the microscopes. There were interesting cumaceans, small shrimplike animals that live in the mud, and there were copepods, which are common in the open plankton. We also looked at some of the beach animals: flat worms, round worms, tiny snails and hermit crabs, beach hoppers and sea weeds.

I took a suggestion from kids at the Port Lions Marine Science Week I did in May to Old Harbor. The kids wanted more disections. A friendly villager donated a recently caught pink salmon to us and we started Friday morning in the weather port with the kids watching while my teacher assistant and I showed them the external and internal parts of the salmon. Then, each camper was given a squid and with help and direction got to open the mantle and take a look at the inner organs. We pulled out the pen and wrote our names with the squid’s own ink, then we saved a small tentacle.

There was a great big octopus prepared for dissection and we compared the size of its beak with that of the squid beaks, then we cut off pieces of tentacles and made tentacle prints, comparing the size of the Giant Pacific octopus suction cups to those tiny ones from the squid.

While dissections are a messy business, the campers are engaged and enjoy it. They needed a good hand washing afterwards and they may have had a bit of a fishy smell around the lunch table that day, but when asked about their favorite activity at camp at least one cute little girl broke into a great smile and said: “I liked when I got to touch the squishy octopus tentacles”.

A blurr of activities in the stunning setting of Old Harbor with twentytwo excited campers; it has been a good week in which the wonders of the ocean have amazed us yet again.

Interested parties will bid to buy the entire Air Group, separate airlines or some/all of a series of bundled lots of Ravn Air Group’s assets.

The new bridge, off the end of 10th Avenue, now connects Nenana to an area west of Nenana that includes hundreds of thousands of acres of land.