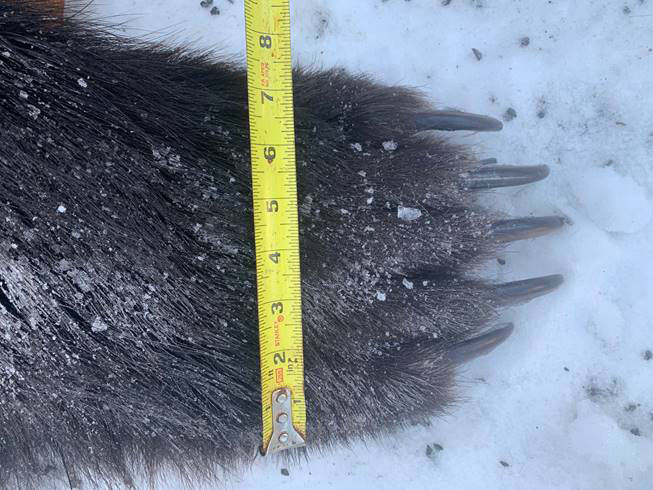 Courtesy of ALAKSA DEPARTMENT OF FISH AND GAME

A paw of the bear that was killed in Kodiak on Sunday. 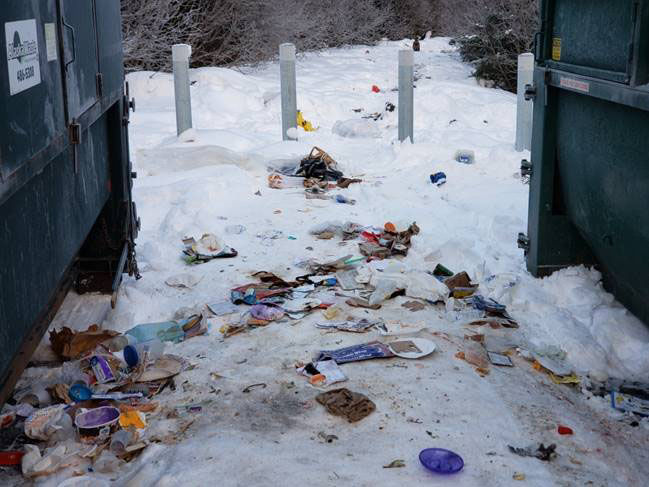 Courtesy of ALASKA DEPARTMENT OF FISH AND GAME

On Tuesday, trash cluttered the ground where the bear was shot on Selief Lane.

Courtesy of ALAKSA DEPARTMENT OF FISH AND GAME

A paw of the bear that was killed in Kodiak on Sunday.

Courtesy of ALASKA DEPARTMENT OF FISH AND GAME

On Tuesday, trash cluttered the ground where the bear was shot on Selief Lane.

A male bear deemed to be a problem was killed near a dumpster located on Selief Lane on Sunday night by a Department of Fish and Game employee, according to Area Wildlife Biologist Nate Svoboda.

Svoboda said the department has been monitoring the behavior of two “problem bears” in Kodiak for the past six weeks.

Department staff decided three weeks ago, along with Alaska Wildlife Troopers and the Kodiak Police Department, that these two bears needed to be killed “because they became conditioned to eating non-natural foods,” meaning trash.

Department staff tracked the bears for three weeks but were unable to catch up to them. According to Svoboda, staff were finally able to catch up to one of the bears Sunday around 10 p.m. The dumpster on Selief Lane has been left open, and the bear was spotted pulling trash out of the dumpster. The bear ran off when the department staff arrived on the scene. Staff remained on the scene until the bear returned and then killed it. Svoboda said department staff were able to identify the bear as one that had caused problems in the past.

“One of the difficulties that we have is we don’t want to be shooting every bear that comes into town. We have to be confident that we’re shooting the bear that’s causing issues. This time of year most of the bears are denning, so the bears that are out and about are easier to identify,” he said.

After shots were fired, police officers and residents arrived on the scene and assisted department staff in loading the bear into the department vehicle and picking up the trash that was spread in the area by the bear.

Svoboda estimated that the bear was between 5 and 6 years old. It measured 8.5 feet and weighed between 600 and 700 pounds.

The bear fur will be used by the department for education purposes. The hide will be sold at the Fur Rondy in Anchorage, an annual event where the Department of Fish and Game sells confiscated bear hides and deer antlers.

Svoboda said that if the second problem bear continues to cause issues in residential areas, it will be killed as well.

“As long as we have people that aren’t respectful to one another and continue to put trash outside of dumpsters, or put roll carts out two to three days before pick up days, that makes things worse,” he said, adding that Kodiak residents can take steps to prevent bears from becoming habituated to human food and trash.

Borough and city code prohibit leaving trash outside of dumpsters. However, the borough does not have the ability to issue fines to those who violate borough code, because they have not adopted the Uniform Table of Minor Offences, or UMOT, which allows the borough to levy fines for code violations. The Borough Assembly is scheduled to discuss the UMOT schedule during a work session Thursday, another step in a process that began more than six months ago.

“It’s just taking too long,” Svoboda said. “Right now they have codes but there’s no teeth.”

In July, a new solid waste removal contract will take effect with Alaska Waste, bringing bear-proof roll carts to some homes in Kodiak.

“It seems like every year we deal with this issue both in the spring and in the fall,” he said. However, he said that this year “it seems a little worse.”

Previous research has shown that 30% of male bears on the island don’t den at all during winter months, meaning that bear activity during these months isn’t unusual. However, bear activity is typically not as dense during the winter compared to the spring and summer months, Svoboda said.

In response to a Facebook post that featured a photo of the bear on the “Bear Aware” group, which chronicles bear activity in Kodiak, some residents expressed concern over the age of the bear, saying it appears to be a cub. However, Svoboda said he is certain it is not a cub.

“This was a mature bear,” he said. “If it were a cub, we’d probably handle things a little differently.”

However, Svoboda said that sometimes bears have to be killed, despite their age.

“Unfortunately, when bears get rewarded so many times for getting into trash cans and roll carts, regardless of age, public safety is paramount,” he said. “Sometimes, we have to dispatch bears just for public safety concerns.”

Alaska Airlines gears up in response to Ravn suspension of service

“With the announcement on Sunday of RavnAir Alaska stopping all operations, Alaska Airlines expressed deep concern for the Ravn employees and communities in the state impacted by the news."

UPDATED 6:16 p.m.: Fairbanks health officials attribute the state's lower numbers to Alaska's delay in infection, with an anticipated peak in cases following one or two weeks after the rest of the country. “We are expecting things to get worse," Dr. Mark Simon, an emergency physician at Fairbanks Memorial Hospital, told reporters earlier Monday. "We are behind the curve of other locations and continue to be ready and anticipate.”