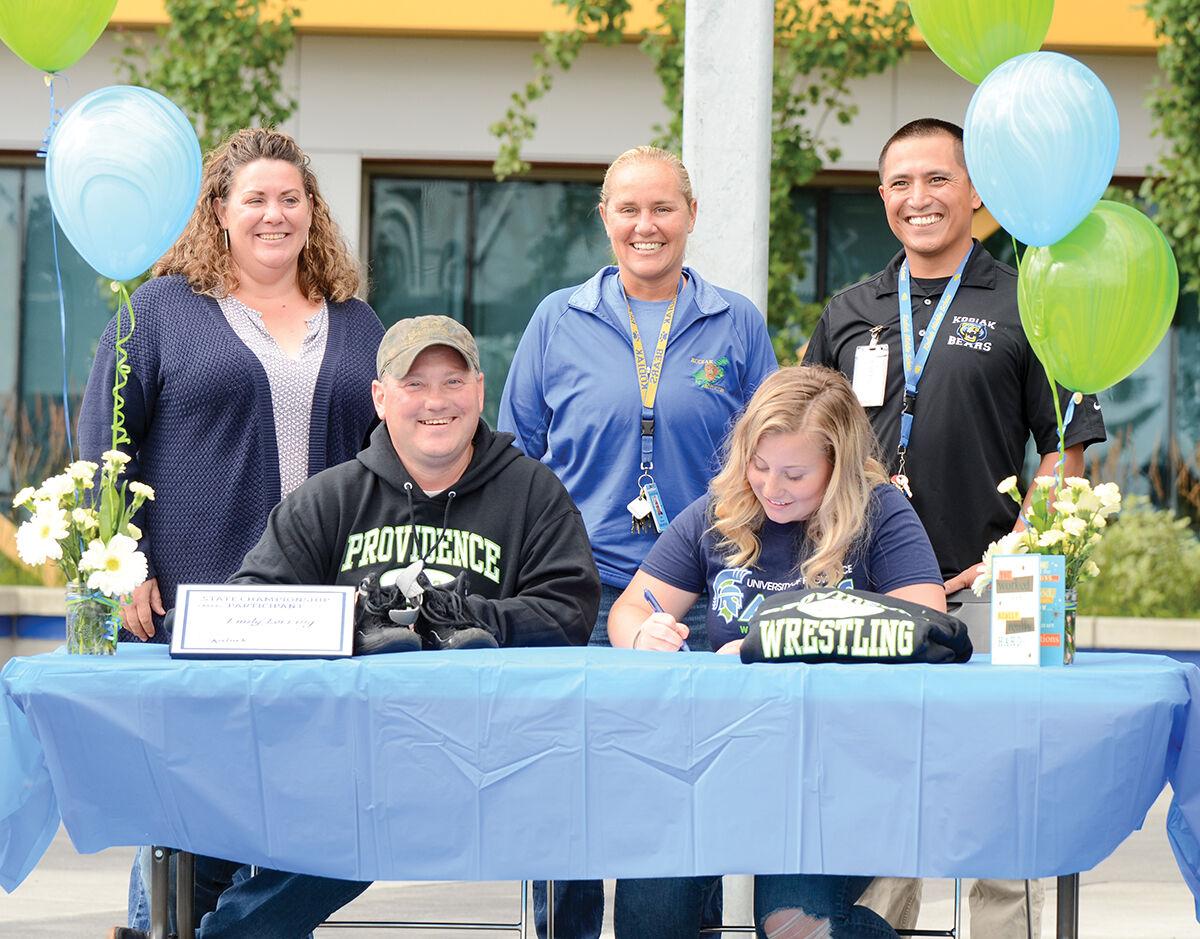 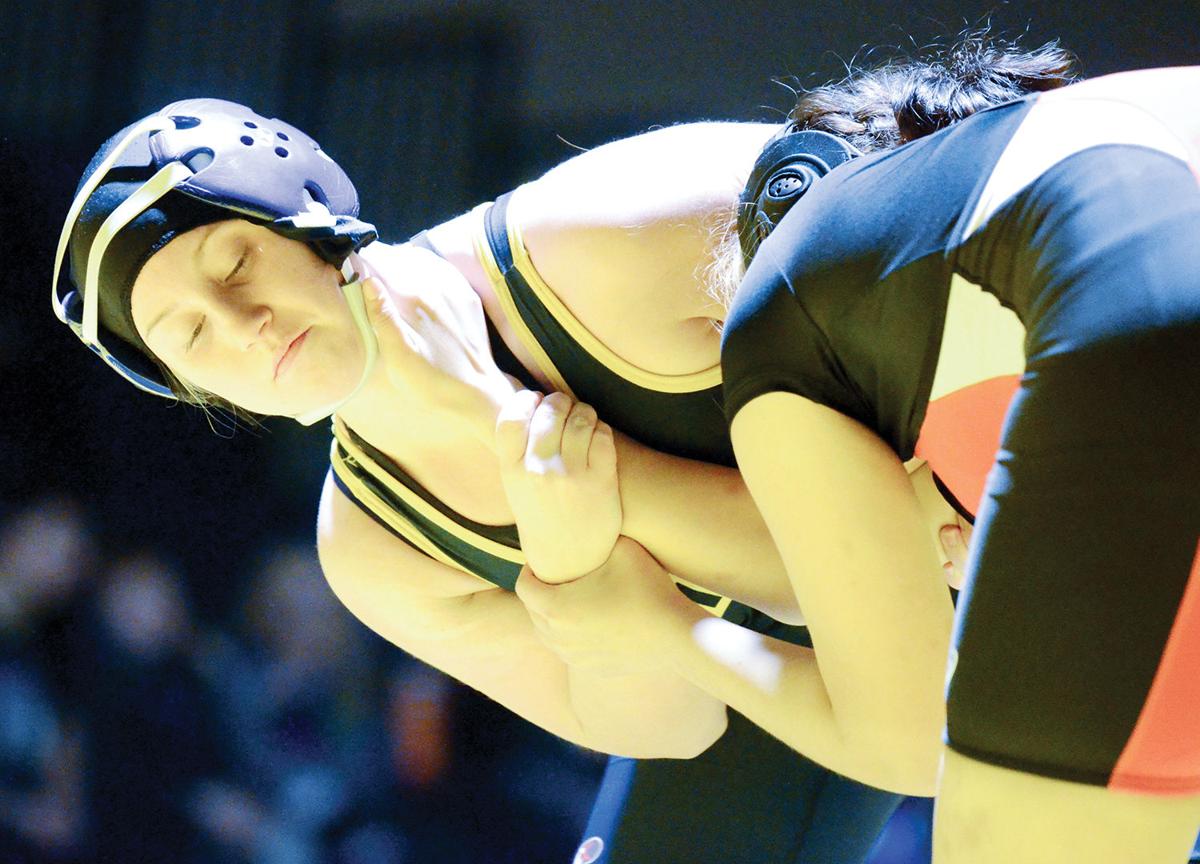 When a person is born into a family with a lineage of state champion wrestlers, that person’s sports path is pretty much set.

Emily Lorring wouldn’t have it any other way and doesn’t know what her life would look like without wrestling.

“I’ve never really thought about it because it (wrestling) has always been there,” the Kodiak High School senior said.

Wednesday afternoon marked a significant milestone in Lorring’s life: She signed a National Letter of Intent to wrestle for NAIA University of Providence in Great Falls, Montana. She was flanked by her parents, Eric and Kari, high school wrestling coach Junior Validolid and activities director Debbie Rohrer at the signing table, which was staged outside the school entrance, so people passing by could stop and celebrate the achievement. Balloons, flowers and a pair of wrestling shoes decorated the table that was covered in a blue cloth.

“I never thought I would get to wrestle in college,” Lorring said. “I’m just really excited.”

Lorring’s great-grandfather was a New York state champion wrestler; her uncle, David, was a two-time state champion for West Valley in Fairbanks and wrestled four years at Oregon State University; her dad won two titles for Cordova in the mid-1990s.

“It’s just something that we did. We’ve always done it,” Eric said. “My mom has been into it. She never wrestled, but was always the mat mom.”

And so the path was set for Emily, who got her first taste of wrestling at the age of 3 while living in Kotzebue, a remote Alaskan town in the Northwest Arctic Borough that is crazy for wrestling.

“I’ve got pictures of her in her little Kotzebue singlet when she was that big,” said Eric, placing his hand in front of his knees.

From that moment on, wrestling has never been out of Emily’s life. She has been part of Kodiak’s wrestling family since 2012 when her family returned to The Rock after spending nearly a decade on the mainland.

“I’ve learned a lot from wrestling as a person,” Emily said. “Wrestling is pretty much my family. I wanted to do it in college because if I didn’t, I wouldn’t know what to do with myself.”

Her first memory of the sport is wrestling with her younger brother Gage, a junior at Kodiak High.

“We would fight all the time,” she said. “When we got off the mat, they would have to break us up and tell us we can’t wrestle anymore.”

Emily said she started talking with Providence coaches after her breakout junior campaign where she went 22-3 and was the state runner-up at 135 pounds. She applied to several schools but had her heart set on Providence, which has good nursing — the field she is pursuing — and wrestling programs. The Argos placed third at last year’s Cascade Conference Championships and finished ninth in the final NAIA Women’s Wrestling Coaches’ Poll. She plans to graduate from Kodiak High at the end of the first semester and be wrestling for the Argos in January.

“Hopeful we have a wrestling season this year, so I can be in season here and practice for college,” Emily said.

Emily’s dedication to improving is apparent by looking at her career trajectory. She went 5-13 her freshman year and 13-8 her sophomore campaign. Last year, she only lost three times in 25 matches, with two of those losses being by one point.

Valladolid said Emily’s focus in practice led to an increased confidence level. She also had a practice partner in freshman Hanna Finley that pushed her.

“I’m sure when she gets to college and sees the level of competition that she is going to take another jump,” said Valladolid, who noted that Lorring has one of the best offensive leg attacks that he has seen.

Valladolid said Emily gives back to the wrestling community by helping coach with Kodiak Kid Wrestling Club and that her presence in the mat room will be missed.

“You really smile when you have an athlete like Emily, and her hard work is rewarded with this type of achievement,” Valladolid said.

Emily is finishing up her third season on the cross country team. She said running helped her mental approach to wrestling.

“I’m not the fastest runner. Last year at the end of every race, I was like, ‘This is my wrestling state title. I just got to get across this line,”’ she said.

Eric said it has been enjoyable watching his daughter grow up on the mat.