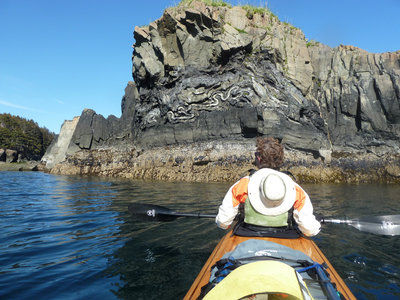 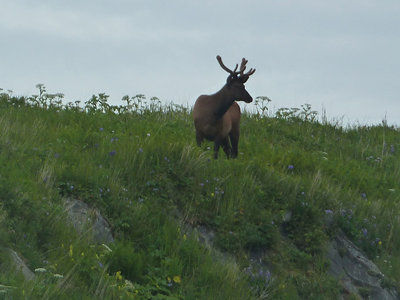 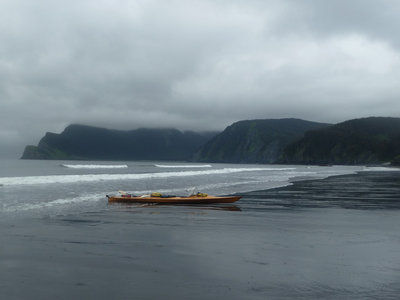 The kayak is beached at King Cove. (Paul Zimmer photo) 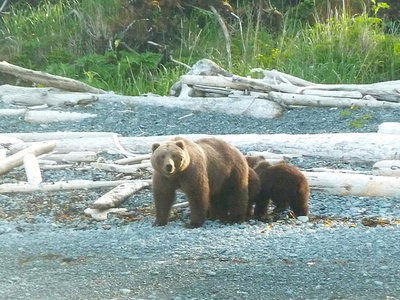 Paul Zimmer reports seeing this momma bear with two cubs on the last beach for us to camp on in Shuyak Narrows before heading out into the Gulf of Alaska. (Paul Zimmer photo)

The kayak is beached at King Cove. (Paul Zimmer photo)

Paul Zimmer reports seeing this momma bear with two cubs on the last beach for us to camp on in Shuyak Narrows before heading out into the Gulf of Alaska. (Paul Zimmer photo)

Some people cruise the Caribbean to celebrate being empty-nesters. Paul Zimmer and Tia Leber took their own kind of cruise — around Afognak Island in a wooden double kayak that Zimmer built.

For the last several years, Zimmer, 53, and Leber, 55, have taken weeklong trips. They’ve kayaked around the west side of Kodiak Island and visited people at set net sites.

“One of my favorite things in the summer is to go paddling around here,” Zimmer said.

The Afognak trip took them 12 days from June 22 to July 3 and 200 miles, starting off at Anton Larsen Bay and heading clockwise around Afognak.

Zimmer said they tried to do about 20 miles per day, but occasionally did less due to headwinds and currents. They took two weeks off work, which wasn’t too difficult.

“I make the schedule,” Zimmer said with a laugh.

Zimmer is the medical director at the Kodiak Community Health Center, while Leber will be teaching at St. Mary’s School this year, where she doesn’t begin work until August.

They both said the trip was beautiful, seeing the mountains across Shelikof Strait and lots of wildlife.

“There were little magical moment with animals, like the whales in Shuyak Strait,” Leber said. “They were feeding and coming up so close we had to bang on the kayak so they knew we were there.”

“They were all over the place,” Zimmer added. “Many times, they were 50 behind us and coming our way. I’m sure they went under the kayak.”

They said the trip was fun, but also difficult. At the end, they were both physically and mentally exhausted.

In the 20 years Zimmer and Leber have been in Kodiak, Zimmer said they’ve only met one other person who’s kayaked around Afognak, Phillip Tschersich, who has also kayaked around Kodiak Island and from Kodiak to Homer.

“It wasn’t an easy trip,” Zimmer said. “You had to plan everything and be on top of things all the time, in the water and on shore.”

Leber added that there were long crossings of up to four or five miles of open water, such as across Kizhuyak Bay on the way from Anton Larsen Bay to Afognak Island, that could have unexpected wind direction changes or rough water.

“It’s a long ways while you’re off by yourself,” Leber said.

She said the northeast side of the island was inhospitable with sheer cliffs and few beaches if they got into trouble.

Another time, they were preparing to pull out for the night only to find that the only beach for several miles had a sow and her cubs on it.

“We just sat there in the boat and waited for her to see us and move along,” Leber said. “And then we pulled on shore and just waited there with bear spray. We pitched our tent and even though she didn’t come back, I didn’t sleep at all that night.”

They took along flares and a VHF radio, wore dry suits and packed everything in dry bags. They had Island Air Service fly 40 pounds of food to Port William, their half-way point, and carried another 40 pounds in the kayak. (They ended the trip with two day’s worth of food to spare, Leber reports.)

They’ve practiced rolling the kayak and flipping it back over in a pool.

They also borrowed a SPOT phone, similar to a satellite phone, to send email messages with their location every night to friends. It also had the capability to send “we’re in trouble” messages to friends and the Coast Guard.

They definitely plan to continue their long trips, although they aren’t sure where the next one will take them.

Leber would like to kayak in the Chenega Bay area in Prince William Sound, taking their kayak on the ferry to get there.

Zimmer said he’s calculated the mileage around Kodiak Island for a future trip, but isn’t sure when or if that will happen. “That’s about twice as far, and we’d take a month,” Zimmer said. “We’ll see.”