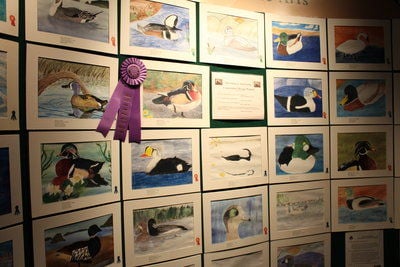 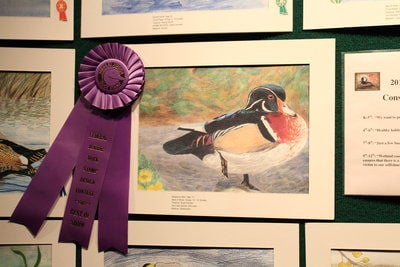 A drawing of a King Eider took Best in Show in the Alaska competition, and competed at the national level in Washington D.C. (Julie Herrmann photo)

A drawing of a King Eider took Best in Show in the Alaska competition, and competed at the national level in Washington D.C. (Julie Herrmann photo)

The competition begins with local programs for learning about ducks. Children choose a species, learn about it and then draw it for their state, district or territory competition. Three first, second and third places and sixteen honorable mentions are awarded in four grade categories: K-3, 4-6, 7-9 and 10-12 for a total of 100 awards.

One entry is chosen from among the 12 first-place winners as Best in Show. That winner then competes in the national competition in Washington, D.C. The Best in Show conservation message also competes nationally.

Madonna Allen from Dot Lake, a small town between Delta Junction and Tok, took Best in Show for Alaska with her drawing with watercolor pencils of a wood duck.

Macey Brassard from Sitka took the conservation message best in show for Alaska with “Just a few bucks can save 1,000 ducks!”

All of the winning artwork from Alaska will be on display at the Kodiak National Wildlife Refuge Visitor Center until at least June 15.

Si youn Kim, a 16-year-old from New Jersey, won the national competition with an acrylic painting of a king eider duck, which will be made into the official 2014-2015 junior duck stamp.

After several years of budget cuts, the Alaska Division of Parks and Outdoor Recreation no longer has enough staff at its Northern Region office to maintain the Chena River State Recreation Area shooting range.