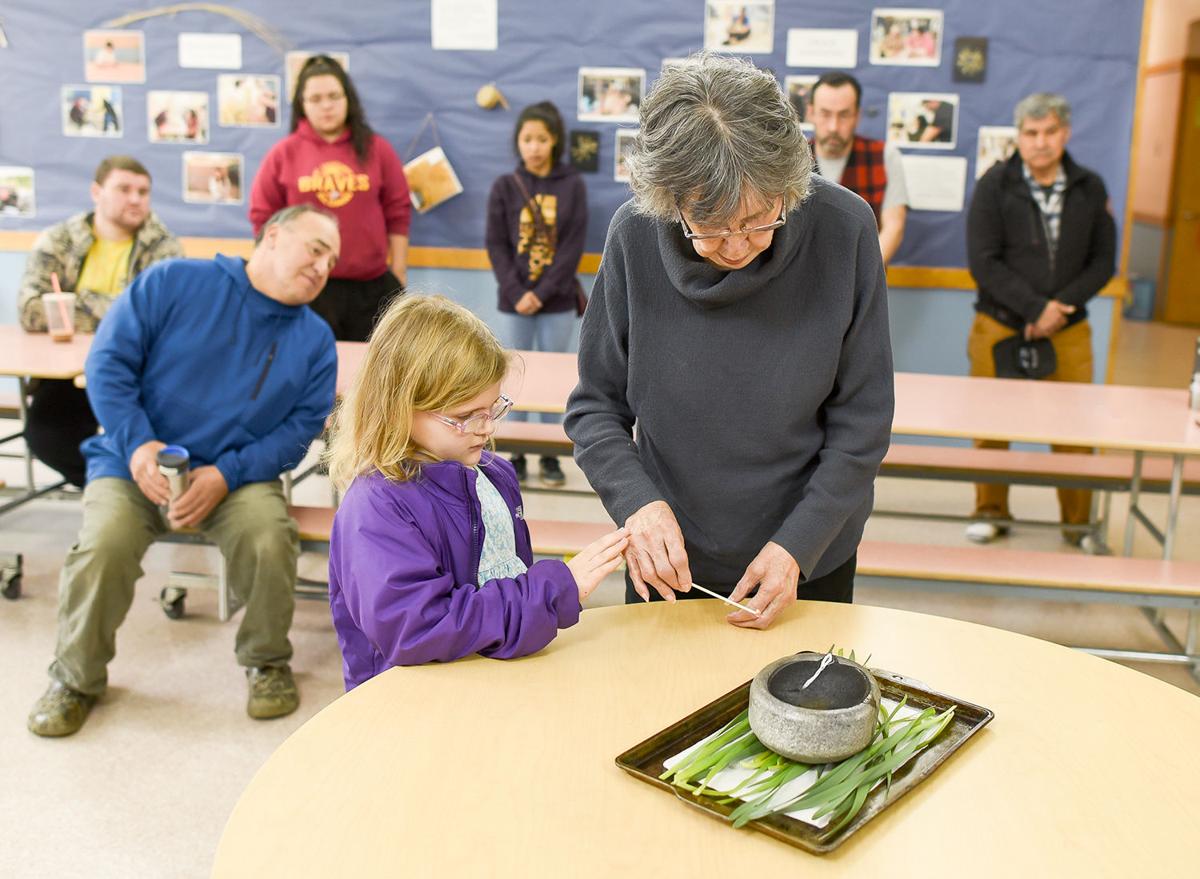 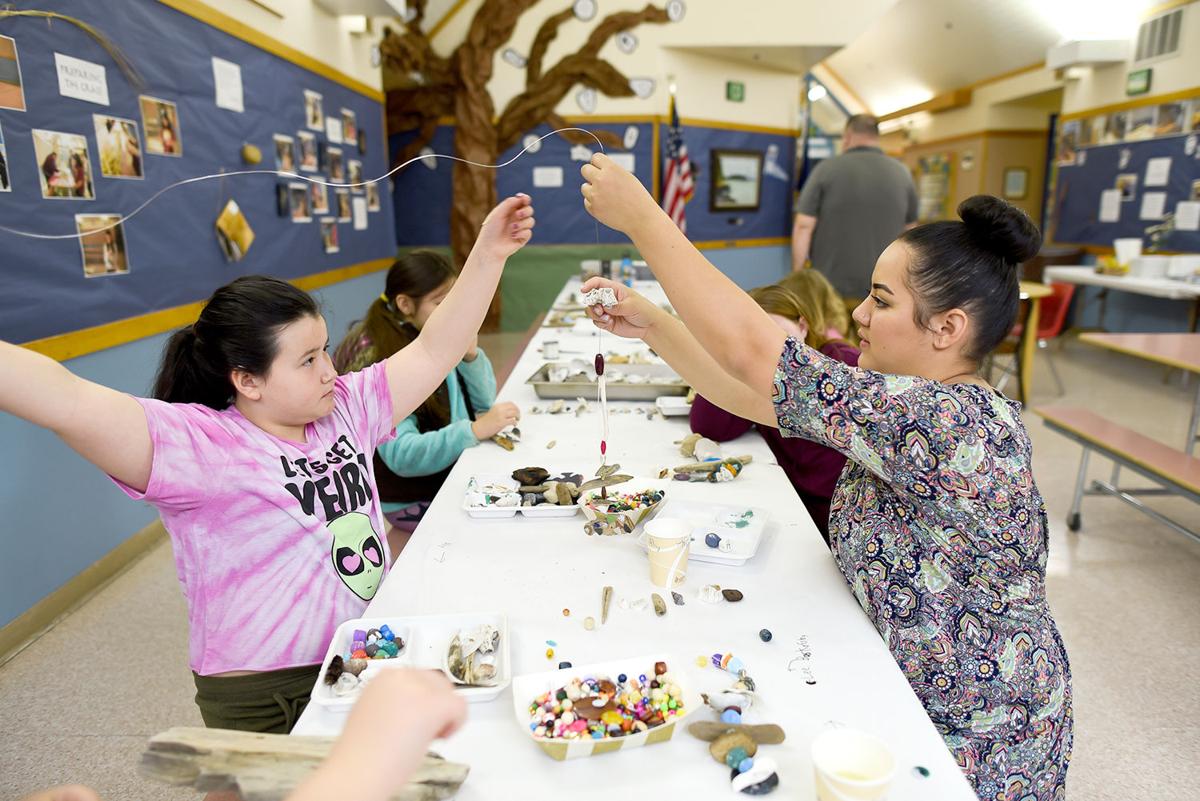 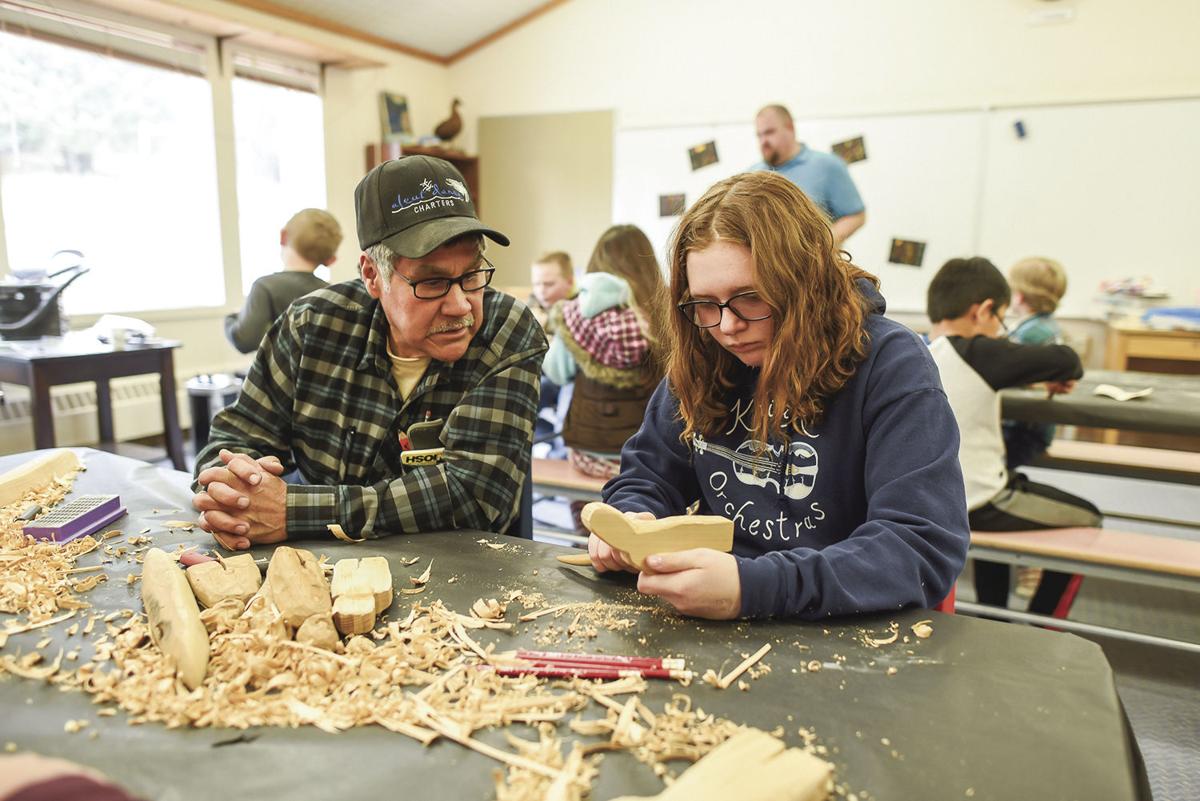 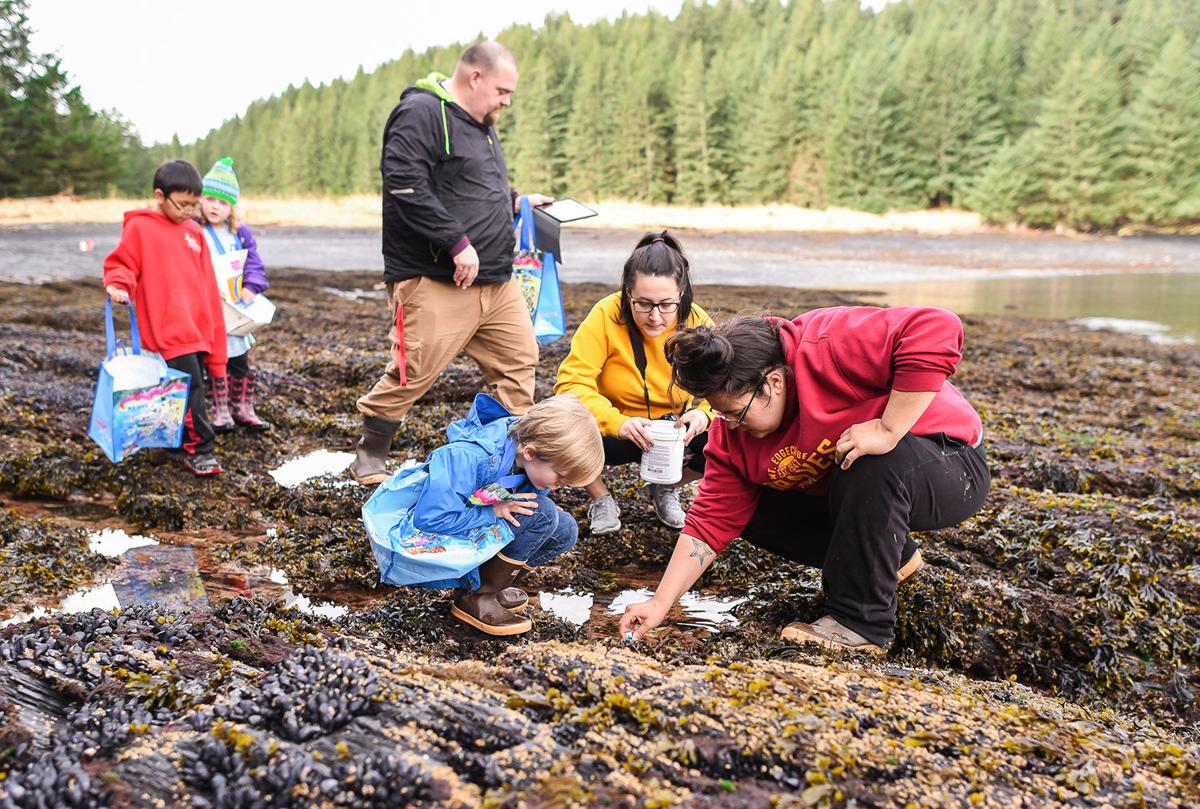 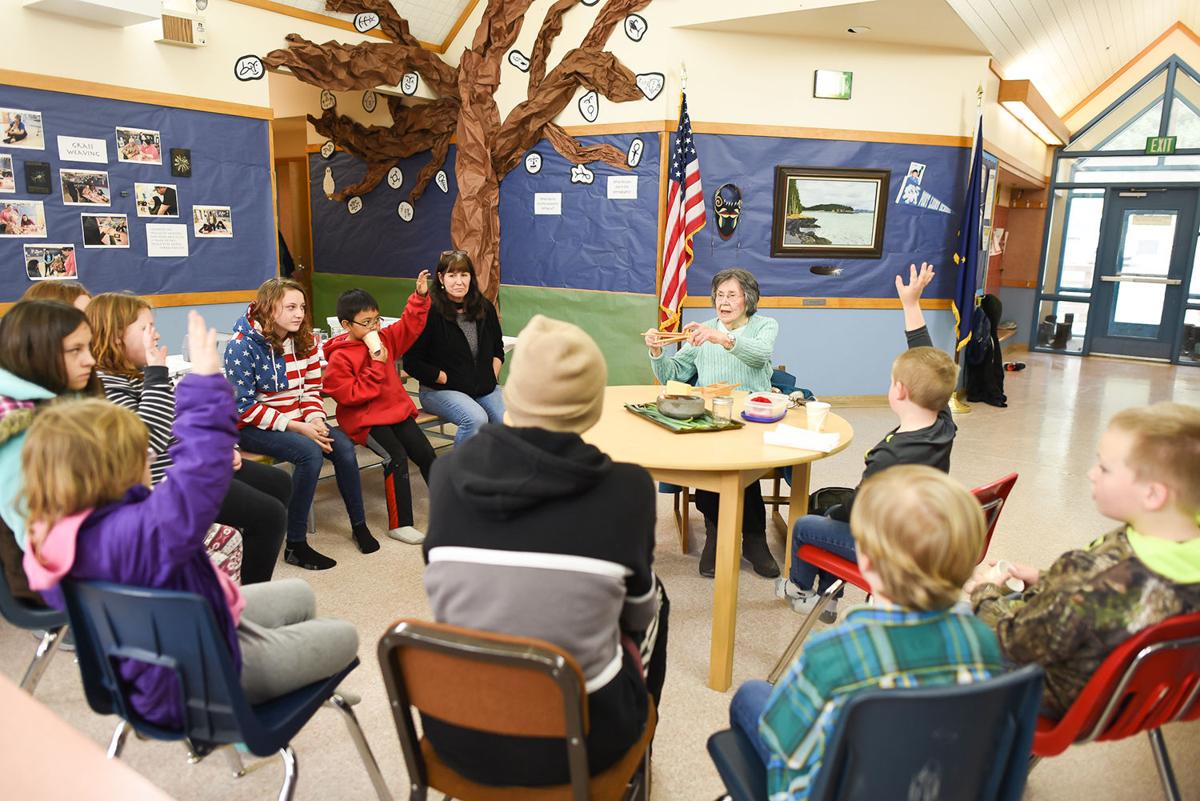 Helen Nelson, center, shares about what life was like on Afognak and in the early days of Port Lions. 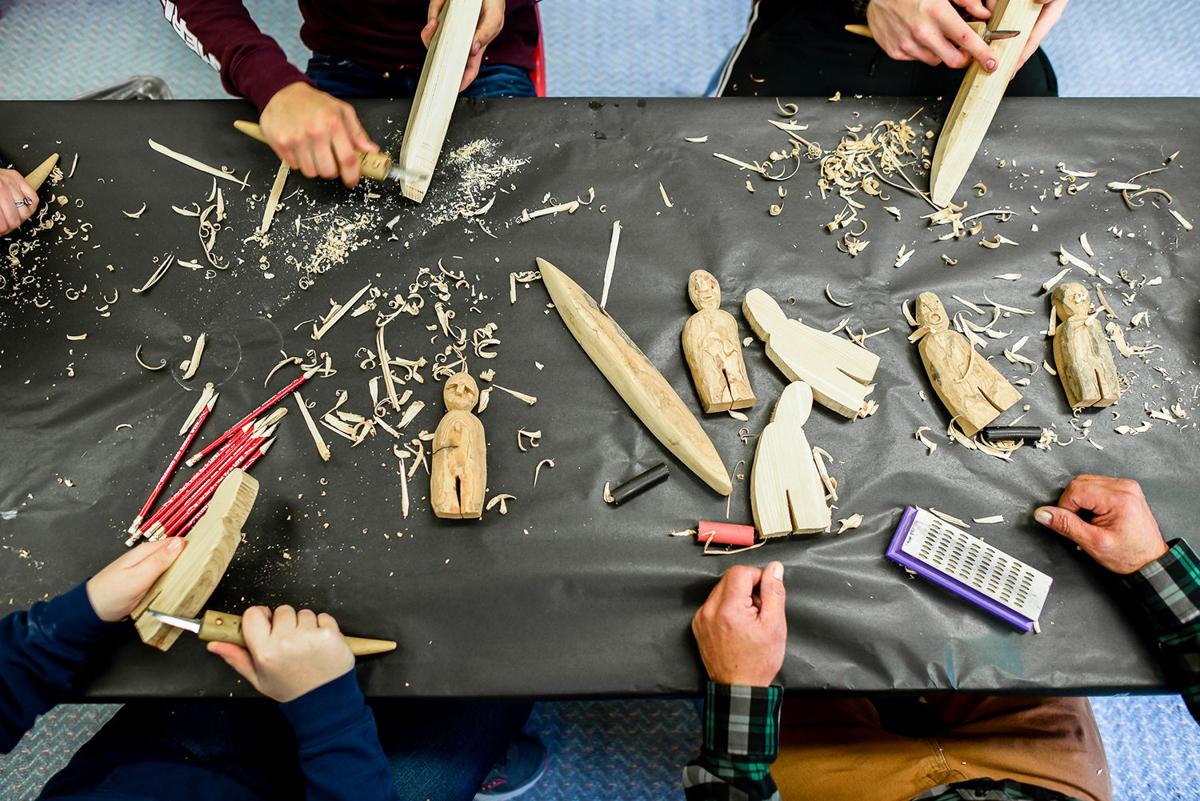 Helen Nelson, center, shares about what life was like on Afognak and in the early days of Port Lions.

Port Lions community members gathered at the local school for a traditional candle lighting ceremony to kick off Culture Week, an observation of Native culture, on Monday.

The candle lighting sparked a week of activity and learning for the community’s youth, according to Port Lions School elementary teacher Amanda Hall. Hall is among several who helped coordinate the event.

Students combed the shores of the Port Lions beach to collect uriitaq (or chitons), anemone, sea stars and shells. On Wednesday, students ended their day when Helon and Candace Nelson shared stories about life on Afognak and the beginning days of Port Lions.

Eighth-grader Sierra Mullan said it was great to see the event return for another year.

“It hasn’t been as involved before,” she said.

The event will wrap up today with a community meal, Youth Olympic competition and a showcase of everything that was made during the week.

Hall said a lot of community collaboration goes into planning the event.

“In the past few years, it’s been a collaboration between the Native Village of Port Lions, the Port Lions School and others in the community that really believe and value teaching and sharing the Alutiiq culture with others,” Hall said.  “In the months leading up to Culture Week, people meet to gather ideas on the activities they want to provide and figure out who could teach them.”

She said this the focus for this year has really been on finding people within the village to lead and share with other members of the community.

“Those people are Port Lions’ own culture bearers,” Hall said. “To recognize people’s gifts and talents within the village is really important and powerful for everyone involved.”

According Port Lions resident Denise May, the event was started as an effort between the local Indian Education Act Parent Committee and the Port Lions students in the early 1990s.

“It was a cultural revival for the culture and the community,” May said. “We worked with the Alutiiq Museum and other entities in the Native community to celebrate our culture.”

Port Lions Mayor Dorinda Kewan, one of the event planners, said Culture Week changes from year to year, depending on availability of funding and expertise within the whole Kodiak community.

“Local expertise and sharing is the common thread with all of them,” Kewan said. “There is usually a traditional foods/cooking element, carving, sewing and an outside event, like a Native plant walk.”

“First and foremost, it’s always been a time where we know that our community will be inside these four walls of the school sharing and working with our kids,” Kewan said. “The best part of that is that our local experts and our elders are sharing what they know and our engaged with our students.”

May agrees, noting that the event also teaches caring and sharing, and most importantly, humor.

“Humor is a big part of Alutiiq people and so coming together and working together you have laughter,” May said. “Seeing it continue with this generation of kids and future generations, to continue to pass things on so they are able to share that with the next generation to remember who we are as a people.”

May added that it also helps promote self-identification and self-esteem.

“If you remember who you are, you feel pretty good about yourself,” May said. “It teaches skills that people don’t realize… I just believe that is important because when people leave the community they’ll have that memory of where they came from and who they are.”

“We’re grandmothers, so passing the values and the culture on is important,”  Rowland-Kaiser said. “Culture Week is special because it incorporates the grandparents, parents and children within our community. It provides an avenue for the connections to be strengthened between families.”

The event also brought a level of understanding about Alutiiq culture to Hall while she helped plan the event.

“Being part of something that brings the community together to pass down the values and traditions from one generation to the next is so important,” Hall said. I’ve learned so much about Alutiiq culture and grown in the appreciation of my own culture in the process. More than anything, I feel truly blessed to be here and part of this phenomenal community.”

Weapons experts testified for both the defense and the prosecution in a teleconferenced hearing.

School principals are the most-vaccinated, the survey finds.

Another school is closed due to structural concerns