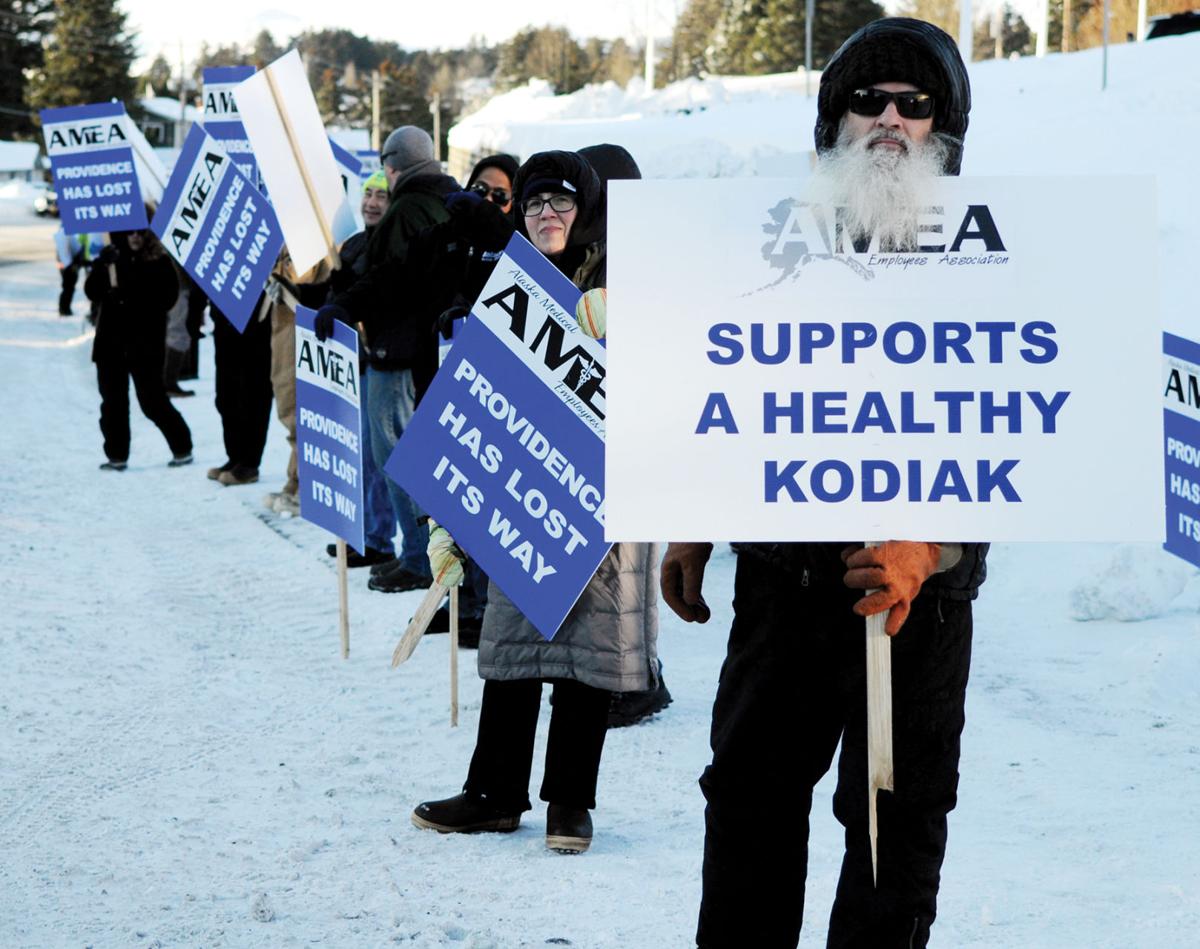 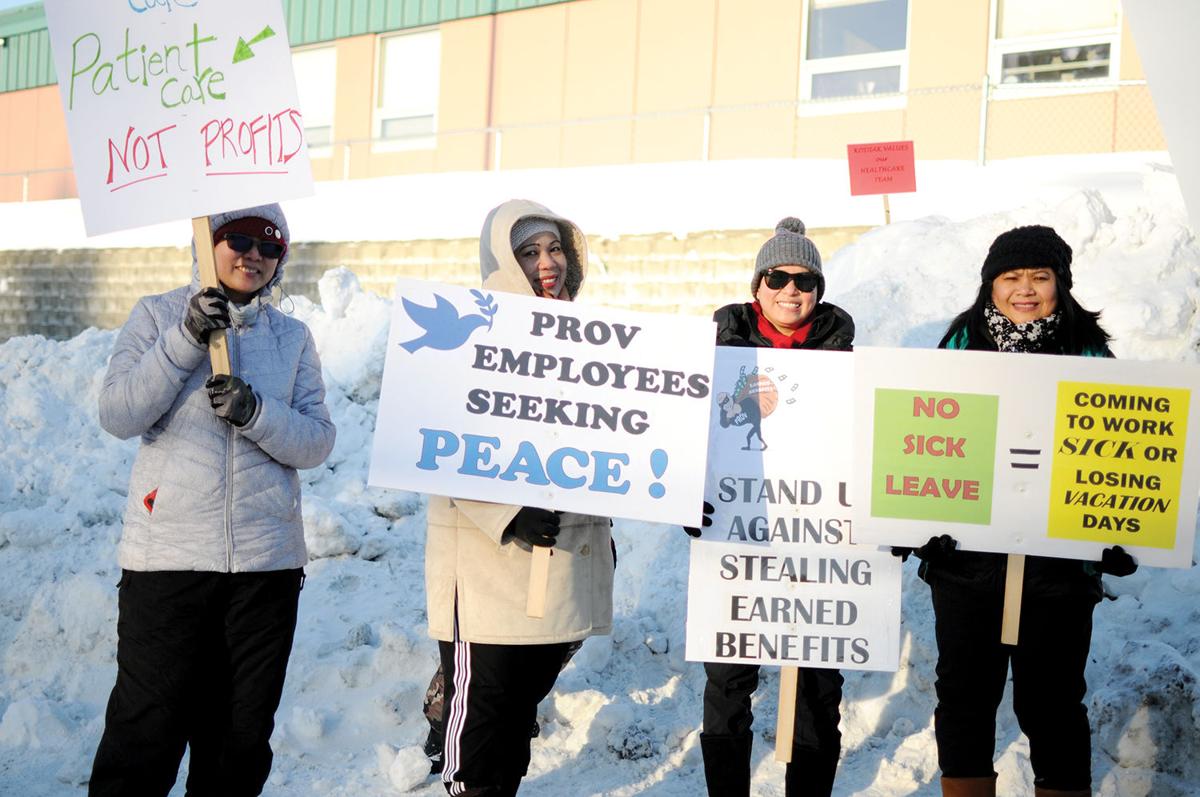 The Alaska Medical Employees Association, a union that represents around 200 employees of the Providence Kodiak Island Medical Center, voted unanimously on Saturday to authorize a strike.

“We still very much do not want to go on strike,” said union representative Genevieve Cook. The union is scheduled to meet with Providence representatives on Tuesday and Wednesday and will determine next steps following those meetings.

The authorization vote took place on the same day as more than 100 union and community members picketed in front of the hospital, braving subzero temperatures and blistering winds with signs that read “Providence has lost its way.” For two hours, picketers of all ages held up signs while lining Rezanof Drive, eliciting honks of support from passing cars.

Contract negotiations between the union and Kodiak’s only hospital have drawn on for a year, as Providence has sought to change union members’ benefits. Under Providence’s proposal, union employees would lose sick leave altogether and have less paid time off, but would gain access to short term disability leave, a benefit providing 65% of income replacement for up to 25 weeks.

Susan Roberts, a registered nurse who has worked for the hospital for more than 13 years, was one of the pickets on Saturday. She said she has benefited from her sick leave and paid time off, and is afraid of what losing it might mean.

“I have benefited from the sick leave package. What they are offering, I can get for $14 a month. What they are taking is worth thousands,” she said. “When I move to a place, I invest in the community, but Providence isn’t going to support us anymore.”

Roberts said that while the union voted to authorize the strike, the goal is to avoid a strike if possible.

“It’s not our goal to lose days from the hospital. We want to repair,” she said. “But when Providence says they will not bargain — what do we do? What do we have left?”

Paula Ensign, a registered nurse who worked for Providence for 40 years, decided to retire last year after she realized the benefits plan might change. She came to support her former coworkers on Saturday, and said she isn’t the only hospital employee who decided to retire after realizing that accrued time off may be on the line.

“I knew this was coming down the road. They forced this in Anchorage,” she said. PKIMC employees became concerned about the future of their benefits package when the new benefits plan was forced on employees at Providence Alaska Medical Center, located in Anchorage, who were not protected by a union.

“I had quite a nest egg built up. I was standing to lose thousands and thousands of dollars. So I decided to pull the plug early,” Ensign said. She had intended to work at the hospital for five more years, but decided to retire in June.

“It affects everybody. This is a small community, we have one hospital,” Ensign said. She added that as contract negotiations drag on, the hospital administration has been slow to hire necessary staff members. “You need time to rest and recoup and recover, emotionally, physically and mentally, from this job.”

Ensign said that paid time off is particularly important in Kodiak, an island in the Gulf of Alaska. “It takes two days front and back on any vacation you take to come and go,” she said. The union negotiated generous paid time off “to accommodate our geographical struggles.”

Jean Jornadal, who has worked as a cook for PKIMC for 17 years, was one of the picketers on Friday. She has more than 800 hours of paid time off saved and some of it might be lost under the new contract proposed by Providence. Jornadal is one of many Filipino employees at the hospital, for whom visiting family entails a long and time-consuming journey.

Sulua Stager, another PKIMC employee who was born in Kodiak and has worked in the hospital for almost 10 years, said the hospital struggles recruiting and retaining high-quality employees.

“We have a hard time recruiting people to stay here,” Stager said. “If the benefits are less, it will get even worse. A lot of the people who come from down south don’t realize how challenging it is, and how expensive it is, to live here.”

Sick leave and paid time off “means we’re well enough to care for the community,” said Robin Roth, who works in digital imaging at PKIMC. “I don’t want people to feel like they have to come in (to work) sick. It’s a small island. It travels downhill.”

Roth moved to Kodiak from Florida last year, after first coming to the island to work temporarily.

“I came here because I loved it,” she said. “At the time the hospital was really close-knit.” She said the negotiations have changed that. “The morale in the hospital is really low. It doesn’t help when we deal with people dying. We take it home with us.”

They said the best case-scenario would be for Providence to honor the benefits they have in their current contract.

“We respect the rights of all bargaining unit members who choose to participate in lawful protected activities. We are committed to ensuring an exceptional workplace experience for our caregivers. This includes competitive pay and benefits, professional growth opportunities and a safe, respectful work environment. Our preference has always been to reach a mutually acceptable agreement constructively and in good faith. We remain committed to all of our caregivers and are proud of the high-quality, compassionate care and service they provide to patients and the community,” Bishop said.

Union members say they have been overwhelmed by the amount of support they have received from the Kodiak community. More than 200 community members signed an online petition supporting the union.

The picket line was also attended by other union members on the island, including employees of Choctaw Defense Services and Matson Navigation.

“There is great community turnout among all the unions in Kodiak. All the unions are supporting each other,” said Mike Donovan, Kodiak area shop steward for Teamsters. He said this is the closest Kodiak has come to a strike in recent memory. There are around 500 union members represented by Teamsters Local 959 in Kodiak, including Providence employees.

Linda McCool and Deb Goodell, members of the classified employees union of the Kodiak Island Borough School District, said they decided to come to show solidarity with the hospital union.

“It’s really important that unions maintain the ability to go to the bargaining table and bargain for their benefits and not have them taken away,” McCool said.

Jace Digel, chief of staff for Teamsters Local 959, traveled to Kodiak from the mainland to take part in picketing.

“We’ve been watching what’s been happening in Washington,” Digel said. Recently, 7,800 staffers of Providence-owned Swedish Medical Center in Washington state went on a three-day strike. After the strike, a hospital spokeswoman said federal mediators are being brought in to continue the negotiating process, according to a report in the Seattle Times.

A Kodiak union representative has been in contact with the union leadership in Washington. “We’ve been trying to support each other, even though it’s quite a few miles away,” Digel said.