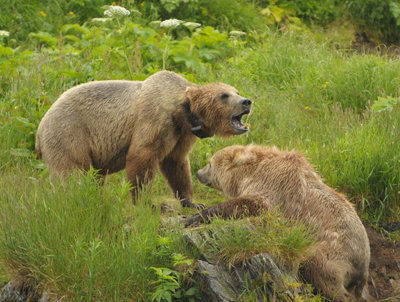 A collared mother grizzly is seen with her cub in summer 2010. Biologist Bill Leacock is continuing his studies of female grizzlies in the Karluk River basin this summer. (Bill Leacock/USFWS Photo) 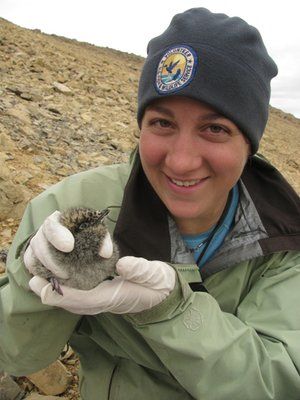 Deanna Russell, part of the team studying the Kittlitz's murrelet this summer, holds up a chick on an unnamed mountain 15 miles south of Karluk. (USFWS photo) 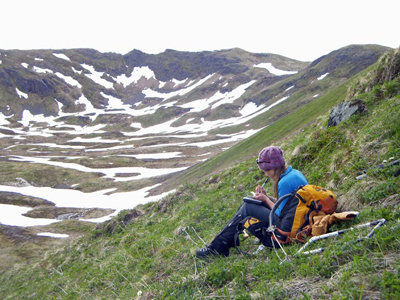 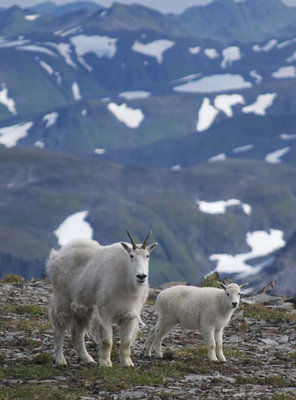 A mountain goat and kid stand above the tree line in Kodiak National Wildlife Refuge in summer 2011. An island-wide census of mountain goats is expected to release its results next week. (USFWS photo)

A collared mother grizzly is seen with her cub in summer 2010. Biologist Bill Leacock is continuing his studies of female grizzlies in the Karluk River basin this summer. (Bill Leacock/USFWS Photo)

Deanna Russell, part of the team studying the Kittlitz's murrelet this summer, holds up a chick on an unnamed mountain 15 miles south of Karluk. (USFWS photo)

A mountain goat and kid stand above the tree line in Kodiak National Wildlife Refuge in summer 2011. An island-wide census of mountain goats is expected to release its results next week. (USFWS photo)

KODIAK — McCrea Cobb, the new biologist with the Kodiak National Wildlife Refuge, has really had to hoof it this summer.

We’re not just talking about three-month field excursions, either. Cobb is the refuge’s only biologist dedicated to ungulates, or “anything with a hoof, basically,” he said.

Cobb is one of a handful of dedicated researchers who have been busy this summer documenting everything from Kodiak Island’s mountain goat population to bear behavior and the activities of a little-known seabird.

Summer is prime time for researchers, who otherwise are denied access to much of the refuge by ice, snow and poor weather during the winter.

In the southern portion of Kodiak Island, Wheeler said the long hours of summer daylight have allowed graduate student James Lawonn of Oregon State University to continue his studies of the Kittlitz’s murrelet, a bird that is a candidate species for the federal Endangered Species List.

“James has been with us for at least three summers,” Wheeler said. “He’s looking into the basic biology.”

That basic biology includes every bit of the bird’s lifecycle from when it’s still in the egg to when it feeds in the silty runoff from Kodiak Island rivers.

“They’re one of the least-studied seabirds in the North Pacific,” Wheeler said. “We have found them most frequently nesting on the unvegetated mountain slopes of southwestern Kodiak Island.”

Bear studies are a tradition each year at the refuge, and Wheeler said Bill Laycock is the biologist in charge this year. He has been joined by a series of volunteers and graduate student Matt Forum.

“They have about 20 collared female bears that they are following,” Wheeler said. “They are looking at the resources the bears are utilizing in the Karluk (River) basin.”

That involves downloading the collar tracking information from an orbiting plane, then analyzing the data and landing where the bears spend most of their time.

“Bill has teams of two that will go out to these locations and they will do vegetation surveys to see what the bear has been feeding on,” Wheeler said.

The data is still being analyzed, but Wheeler said the study is already starting to see results.

“Preliminarily what we’ve found on that study is that females with cubs move less than the females without cubs,” he said.

Cobb, meanwhile, has been active during his first year with the refuge. His primary study this year has been studying the impact of mountain goats, which were introduced to Kodiak Island in the early 1950s. Today, there could be as many as 3,000.

“We had a crew of five people and we spent three months out in the field,” Cobb said. “We wanted to do a comparative study to see if mountain goat diets and feeding selection may differ from areas where they’ve been around a long time. … We just got out of the field last week, so we’re still getting the data into the computer.”

In addition to the dietary study, Cobb said he participated in a joint aerial census with the Alaska Department of Fish and Game to count the goats on the island. Because of limited funding, this is the first time in three years that the entire island has been surveyed.

“By next week we’ll be able to find out (how many there are),” he said.

“They’re pretty concentrated around the Ayukuluk River and along the coastline south and west of that,” he said.

Once things quiet down, Cobb will get to work on a big project — planning the next decade of hoofed-animal research in Kodiak.

“That’ll be to steer our research and monitoring for the next 10 years, prioritize what projects we want to do,” he said.

Wheeler said studies like the ones conducted by Cobb are important because they guide how the refuge is managed.

“The information that we learn from the research we do on the island helps us better manage the wildlife populations on Kodiak refuge,” he said.

“The bear work, for instance, helps us and our partners in the state. They set the seasons on the number of bears taken, and they will utilize this information that we gather for them,” Wheeler said. “We share the information freely.”