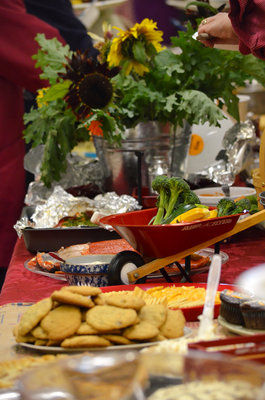 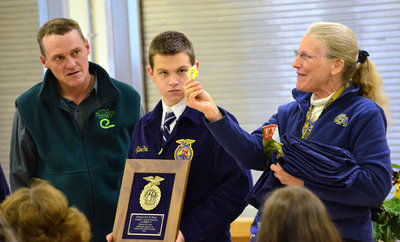 In most years, the Kodiak Soil and Water Conservation District’s annual harvest potluck is a chance for growers to celebrate their harvests and share experiences.

This year’s event was shadowed by a hint of sorrow as the district says farewell to Mark Kinney, the field officer who oversaw the growth of Kodiak’s high-tunnel hoophouse network.

“This man is the godfather of high tunnels; there’s no question about that,” said Dave Kaplan, a Kodiak Island Borough Assembly member and conservation district employee.

Kinney came to Alaska 33 years ago and 23 years ago began working in the Natural Resource Conservation Service’s Homer office, which supports the Kenai Peninsula as well as the Kodiak archipelago.

Kinney has a background in ranch management and said he feels most comfortable in places like the ranch of Bill Burton, who operates on Narrow Cape.

While ranching was his roots, Kinney found his biggest success with the high-tunnel hoophouse program administered by the NRCS. That program subsidizes the construction of high-tunnel hoophouses, greenhouse-like structures that lengthen the growing season by moderating conditions within them.

Since the program began, 241 high tunnels have been built in the Kodiak Island Borough and the Kenai Peninsula, the most by far of any NRCS district in the country.

While some in attendance credited Kinney with that success, he denied it. “It’s not me that did this; we had a program,” Kinney said. “It’s a movement that’s not going to end just because I fly off to Mexico.”

Also at the potluck, Kodiak’s Future Farmers of America thanked the soil and water conservation district for its help in conducting a buffalo hunt raffle fundraiser.