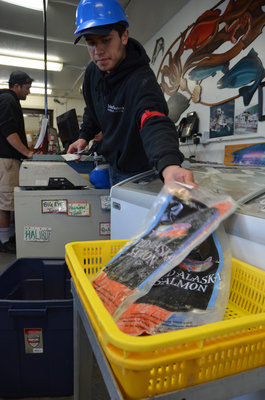 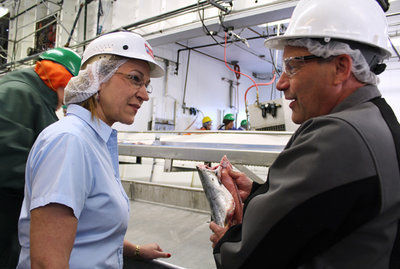 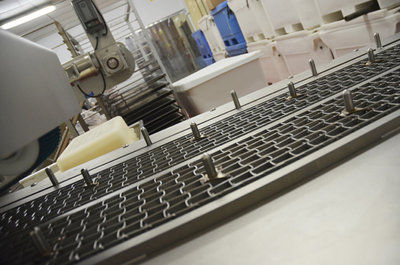 The processing line of the Kodiak Island Wildsource processing plant rests dormant Sept. 19, 2012. The plant, an endeavor of the Sun'aq Tribe of Kodiak, processed roughly 100,000 pounds of salmon this season, its second in operation. (Daily Mirror file) 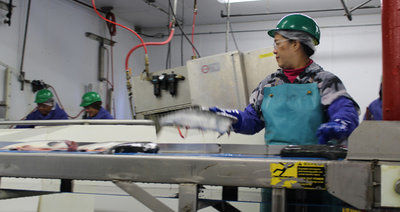 A Westward Seafoods employee moves sockeye salmon down the conveyor belt at the processing plant on Aug. 21. (Daily Mirror file)

The processing line of the Kodiak Island Wildsource processing plant rests dormant Sept. 19, 2012. The plant, an endeavor of the Sun'aq Tribe of Kodiak, processed roughly 100,000 pounds of salmon this season, its second in operation. (Daily Mirror file)

A Westward Seafoods employee moves sockeye salmon down the conveyor belt at the processing plant on Aug. 21. (Daily Mirror file)

Kodiak had a better than expected return on pink salmon this year.

Preseason estimates by the Alaska Department of Fish and Game forecast Kodiak would have an average return of 13.2 million fish. Instead, the department counted more than 16 million pink salmon in its Kodiak management area, making for strong even-year return based on the department’s harvest categories.

“We came in a little over 16 million,” Fish and Game biologist Matthew Birch Foster said. “Just about everything we expected to happen did. It was a pretty good year for sockeye and pink forecast. Pink salmon was a little above and sockeye was a little below, but all in all, the number of salmon predicted was fairly close to what happened.”

Fish and Game predicted a strong return on the west side. The department estimated 6 million pinks on the west side and saw more than 8 million. The returns of pink salmon to Afognak and Alitak were also higher than expected.

Fish and Game won’t have final numbers for sockeye salmon until the end of October, but current figures aren’t expected to change drastically. Fish and Game predicted 2.7 million sockeye and estimate around 2.2 million returned.

The Karluk River system, which has been down since 2008, had an average sockeye return for both early and late runs.

“We predicted there was going to be an upswing at Karluk in both the early run and late run,” Foster said. “Those were good. Those really drove the west side for sockeye.”

Kodiak’s processors had mixed feelings about the salmon season.

“It was OK,” said International Seafoods of Alaska Kodiak plant manager Toshiaki Kishimoto. “It was slower than we expected.”

Pacific Seafood manager John Whiddon said the season was better than expected because of the increase in number of pinks, the pricing, and the openings on the west side.

“I think on the pinks it was definitely better than we expected,” Whiddon said. “The best thing about the west side was that it stayed open most of the season. Every fisherman I’ve talked to on the west side said it had one of the better seasons in years.”

The season also went well for Westward Seafoods, next door to ISA.

“We actually went a little over what we budgeted for,” said Westward Seafoods plant manager Sune Forsman. “The pink run was bigger than we expected this year and a lot better than last year.”

Westward Seafoods had three weeks of 24/7 shifts because of the amount of salmon coming in.

“There is more work every day, so we worked 24 hours a day,” said Gabriel Saravia, Westward Seafoods’ operations manager. “This year was better than other years.”

Some Kodiak processors had the help of J-1 Visa workers during the salmon season.

The J-1 Visa program allows international candidates to gain a cultural experience by traveling to the U.S. for study or work programs. Alaska has used J-1 Visa workers for the fishing industry since the program started in 1961.

Susan Pittman, a spokeswoman for the U.S. State Department, said around 2,500 people were in Alaska this summer with the J-1 Visa program, down from 2011, when Alaska saw 4,700 J-1 Visa participants.

About 26 people worked in Kodiak this summer through the J-1 Visa Summer Work Travel program, Pittman said. Of those 26 workers, 22 worked as seafood processors, three worked in hotels and one worked in the sport fishing charter industry.

“We cut down, but it’s always a help to have them,” Kishimoto said.

In past years, the Brother Francis homeless prevention program saw an overflow of J-1 workers who weren’t able to find housing during the few months they were in Kodiak. This year, the shelter didn’t see any of the J-1 participants.

“They did not show up at the shelter this year,” program director Monte Hawver said. “As a result, our homeless prevention has been a lot less needed during the summer.”

J-1 workers may not be able to work for Kodiak’s processors next year after proposed regulation changes go into effect. Earlier this year, the State Department decided to make changes to the program that would ban J-1 workers from working in fish plants.

The regulation changes were put off until November to give Alaska’s processors time to get through the busy salmon season.

The borough became aware of the positive case earlier today and immediately closed the library, instructing members of the public to leave the building and sending all employees home.