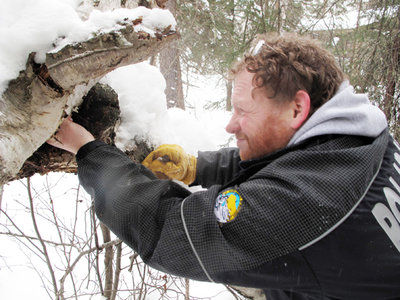 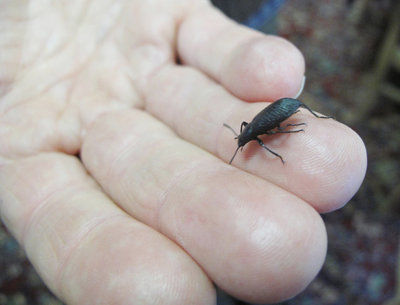 A black Upis beetle crawls on Ben Armentrout’s hand after coming in from the cold. (Photos by Ned Rozell)

A black Upis beetle crawls on Ben Armentrout’s hand after coming in from the cold. (Photos by Ned Rozell)

CHENA HOT SPRINGS — “This is your chance — maybe your only chance in a lifetime — to see vole poop in a tunnel,” said Mike Taras, an expert tracker and wildlife educator for the Alaska Department of Fish and Game.

Seven people kneel and then squint into a blue-white opening in the snow. We see tiny cigars, evidence that a red-backed or meadow vole had indeed paused there. Taras was correct — this was the first time most of us had seen vole poop in a snow tunnel.

Taras was at Chena Hot Springs Resort as part of a conference devoted to Alaska’s perpetual resources, snow and ice. Teachers from around Alaska attended to soak up lesson ideas they might share with their students.

The most accessible teaching laboratory for many of the teachers is just outside the door, Taras said. Tracking animals in snow and soil, a skill our species has lost over time, requires problem solving and teamwork.

“Tracking is the origin of science,” Taras said. “Finding animals to survive on was once life or death.”

While Taras waded through a winter’s worth of snow to point out the scratchy wing marks of a magpie or similar-size bird, another instructor worked in a white crater 30 feet away, levering bark off a dead birch tree with a screwdriver.

Todd Sformo of Barrow traveled the farthest south to reach Chena Hot Springs. A few years ago, he studied insect physiology for his graduate studies at the University of Alaska Fairbanks. On the grounds of the hot springs resort, he searched for a beetle that is coldproof.

Sformo also appeared to be cold hardened from his time in the farthest north settlement in Alaska. He wore no hat as he dug for hibernating insects and his jacket had “POLAR BEAR PATROL” written on the back in glow-in-the-dark letters. One of his duties with the North Slope Borough is to discourage polar bears that wander into Barrow.

“I found something,” said Ben Armentrout, a teacher from Anchorage who was, with his own screwdriver, working a dead spruce near Sformo. With a gloved hand, he extended a yellow grub toward Sformo.

“That’s a larvae of a beetle,” Sformo says.

Armentrout dropped the worm in a vial to bring indoors. He wanted to see what happened when he carried it inside a warm building.

With the trained eye and a little practice, the Anchorage teacher soon found another insect, a handsome black adult beetle he plucked from beneath spruce bark.

“That’s an Upis,” Sformo said, referring to another beetle for which there is no common name. “It’s freeze-tolerant. He’s up there away from the snow because these freeze-tolerant ones want to be exposed to cold right away.”

A few hours later, back in a heated dining room, magic happened. For probably the first time since they crawled beneath loose bark in September or October, the creatures stirred.

In a different universe than the cold, quiet one it endured for the past five months, the black Upis beetle skittered over Armentrout’s hand. The insect had survived freezing, an experience that would have killed the humans in the room. It reminded Sformo of his college days, when he would test, but not always find, the cold limits of these astonishing animals that live all around us.

“I took a bunch of them down to minus 74 (degrees Celsius, about minus 100 Fahrenheit) for 24 hours,” he said of the insect crawling on Armentrout’s ring finger. “All of them came back to life.”