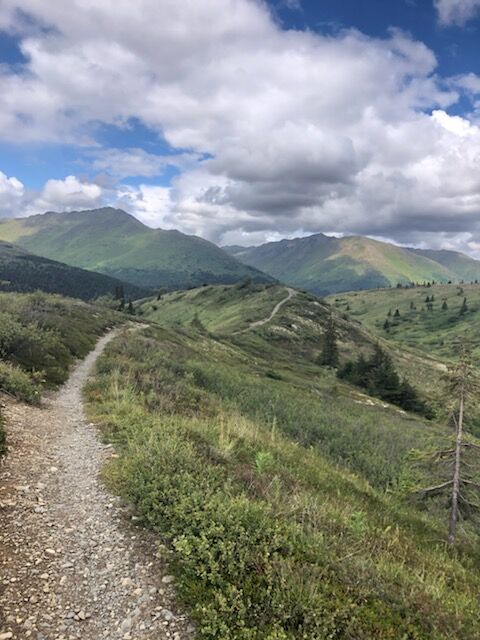 A trail on the Resurrection Pass Ultra. 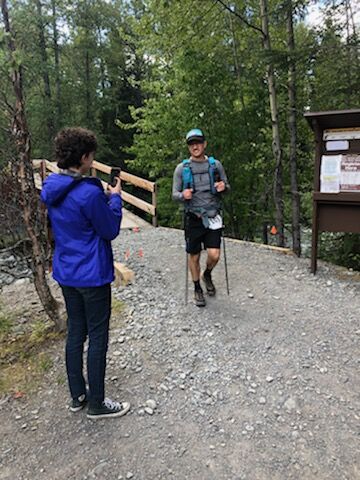 Acacia Birbilias takes a photo of her dad, Rich Birbilas, during the Resurrection Trail Ultra on the Kenai Peninsula on Aug. 9.

A trail on the Resurrection Pass Ultra.

Acacia Birbilias takes a photo of her dad, Rich Birbilas, during the Resurrection Trail Ultra on the Kenai Peninsula on Aug. 9.

Most people will never run a 100-mile race in their lifetime. Why would anybody want to punish their body for that long of a duration?

Rich Birbilas, Bill Dube, Sam Jordan and DJ Rhinehart — all residents of The Rock — put their bodies through the wringer last weekend when they competed in The Resurrection Pass Ultra last weekend on the Kenai Peninsula.

And they survived to tell about it.

“It was a very long, drawn-out process. Most things you do are quick, and the goal is easily attainable. This was more of a yo-yo effect,” said Dube, days after finishing the race in 28 hours, 26 minutes, 6 seconds — good for eighth out of the 12 finishers.

The race starts and ends in Hope and sends runners on the Resurrection Pass Trail, a route used by early gold miners to access mining claims along Turnagain Arm. Once competitors hit Cooper Landing, they turn around and head back to Hope. The terrain included a bit of everything, from rolling hills to curvy and rooty trails. Runners endured 10,000 feet of elevation gain.

With a race four times as long as a marathon, the mind and body get tested more than ever.

“There were quite a few low points where self-doubt came into question,” said Dube, a Coast Guard aircraft electrician. “The biggest thing was the mental toughness and to be able to put your head down and just keep moving forward.”

Birbilas moved forward the fastest out of the Kodiak four, finishing in 27 hours, 14 minutes, 35 seconds. He was the second runner to reach Cooper Landing, but foot issues slowed his pace in the final stages of the race. Even though he didn’t reach his first goal of finishing in under 24 hours, he did achieve his second goal of being under 30 hours. Only winner Jacob Konrath-Bera finished in a day, checking in at 23:40:11.

Jordan logged 42 miles and Rhinehart 70 before both withdrawing from the race. Four of the 17 starters did not finish.

“The process is more important than the goal,” Birbilas said. “It is about going out there and having fun running in the mountains with your friends.”

And that is how the four have spent their last five months preparing for the race — running all over Kodiak Island. They were all going to run a 50-mile race in Fairbanks in July, but when that race was canceled due to COVID-19, they upped their training regime to prepare for Resurrection Pass.

“It is a lot of long hours of running,” Birbilas said. “A lot of waking up at 5:30 or 6 in the morning on Saturday to go start your run so you could still have part of a weekend.”

Birbilas said completing a 100-mile race had been on his bucket list after reading the book “Born to Run” a handful of years ago. The 17-year Coast Guard C-130 pilot enjoys being in the mountains and pushing his body to taxation.

He signed up to run the Resurrection Pass 50-mile race last year, but that event was canceled due to wildfires. Due to COVID this year, the race was unsupported, meaning no aid stations with water. Everything the runners needed had to be put in a pack they carried with them, including a water filter.

“What you started with is what you finished with,” Dube said.

Dube had a similar experience as Birbilas as his pace slowed 40 miles into the race due to a foot and leg that were not cooperating.

“From that point, I would say I put a good fast hike in, alternating between hiking and running,” he said.

Dube hated running when he started five years ago in North Carolina, but he soon discovered the physical benefit. He ran the first of his  two 50-mile races three years ago.

The 100-miler was the biggest challenge of his running career. He hugged his family when he finished, then collapsed on the ground.

“The final three to four hours, you were just looking forward to being able to sit down and relax,” Dube said.

The 50-mile race started the morning after the beginning of the 100-mile race.

“I remember her blowing past me,” Birbilas said.

Bear removal in Denali National Park is exceptionally rare. A bear was killed and removed from the park in July, 2016 — the last time before that was in the summer of 1980.