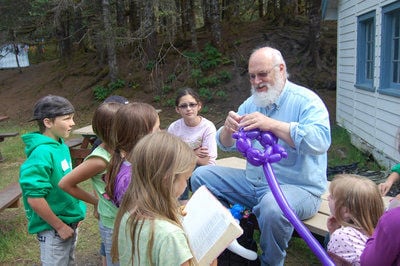 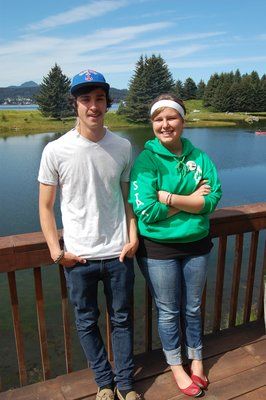 But along with the tranquility and beauty come annoying bugs, prickly plants and days of rain that make irritable children want to go home where it’s warm and dry.

Bugs are part of God’s creation, too, and the rain that spoils a perfect picnic also makes those beautiful flowers grow.

Like those unpleasant aspects of nature, camp conflicts have a purpose, said this year’s Camp Woody directors Jarod Young and Lauren Hamlett.

“When you live in close quarters, there is bound to be conflict,” Hamlett said. “We have a lot of vulnerability out here.”

“When we get tired and exhausted, we remind ourselves that it’s not about us,” Hamlett said. “We’re here to serve God. The only thing that keeps us going is strength from the Holy Spirit.”

Hamlett and Young said it was an honor to be team members in a camp that has become a Christian tradition on Kodiak Island.

Since 1956, Camp Woody has been the summer retreat where kids from elementary to high school learn the basics of the Christian faith in chapel services, at late night campfires and in heart-to-heart conversations with their counselors.

During each week geared for a specific age group, a local pastor is on hand to give inspiring messages and provide pastoral care. A wide range of activities, including hiking, kayaking, canoeing, capture the flag and other lively games, arts and crafts classes and chapel keep the kids going from morning to night. Volunteers help with cooking and other services.

This is the first year that Hamlett and Young have taken on the challenge as camp directors. In the past they served as counselors.

Hamlett, who found out about Camp Woody in her home church in California, is an English literature major and philosophy minor at Azusa Pacific University near Los Angeles.

Once Hamlett graduates, she would like to volunteer for the Peace Corps or Teach for America.

Young, a 2010 Kodiak High School graduate, will be a first-year student at Mount San Antonio Community College in San Dimas, Calif. He also plans to continue working in youth ministry at Christ Chapel of the Valley, where he served as an intern last year.

Young has been coming to Camp Woody since he was a child. At first he accompanied his mother, Karen Young, who volunteered as a cook.

After spending many summers at Woody as a camper, Young became a counselor. He felt a little awkward at first counseling his high school peers, he said.

Going from counselor to director this year was a “weird transition. Now I’ll have to manage and cook to say I did everything.” Young added that he would like to be a camp manager some day.

Young said Camp Woody introduced him to skills that he continues to use.

As a camper, he learned how to play the harmonica with guidance from camp director and guitar player Nate Smith.

He also learned how to use a camera.

“I became a super intense photographer,” he said. So much that he and his friend created a photography business. Young plans to take photography courses at Mount San Antonio.

As a Camp Woody leader, Young has been in a position to inspire the youth to discover and develop their talents and use them for the glory of God.

A God-centered view of life is what Young, Hamlett and fellow team workers tried to teach the children from week to week at Camp Woody.

The spiritual goals they set for themselves are what they desired for the campers as well.

“We give them an opportunity to make a decision for God and to serve God,” Hamlett said.

What is important is not only making that decision, but growing in the faith, she explained.

“We want them to show God’s love as they leave camp,” said Young.

Hamlett said that a mix of children from “Christians to non-Christians, church kids to the non-churched” attended camp.

“We want to branch out more to those outside of the church,” Hamlett said, hinting at the evangelical bent of Camp Woody.

As the Camp Woody team helped kids grasp the meaning of the Gospel and made biblical applications to their own lives, they grew closer together. Even the conflict helped bring that camaraderie about, Hamlett said.

It seems to work out that way with the campers, too. By week’s end they’ve forgotten the rain and sadly say goodbye to the place where they made new friends and experienced the blessing of being a child of God.

Recalling his time at Camp Woody as a camper and a leader, Young said Woody is like another home to him.

“We’ve become a giant family. We work together. We’re here to help each other out and to build each other up. We’ve grown super close.”

The co-directors and other team members planto meet in California later this year.

In the dreary winter days ahead there be may be challenges for the Camp Woody team. Doubts will pour down like the rain that drenched the campers; questions will come like the irritating bugs that kept them from going to sleep.

Hamlett knows how she’ll handle them.

“When I have doubts, I think about Camp Woody and I’ll remember that God is real,” she said.

After feedback from the business community, the council elected to keep the sales tax rate increase to 5.5% and amend the maximum tax on any single transaction to $11 instead.