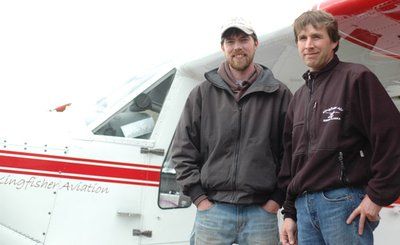 Kingfisher Air Inc. has the distinction of having two unique floatplanes in its fleet.

The Bush Hawk planes are white with red trim, but that isn’t why they are unique.

“There are only about 30 of them in the world, and we have two of them,” Kingfisher co-owner Kyle Eaton said.

The planes were built in 2000 and 2004, which also puts them in a league of their own, because most floatplanes in Kodiak were manufactured in the early 1980s, Eaton said.

Eaton and his brother, Glen, who also is an owner, are glad to have the planes.

Their clients are also glad, but for different reasons.

“The big windows for the tourists are a big selling point,” Kyle said.

Kingfisher Air has been operating in Kodiak on Lilly Lake since 1998, but it didn’t move to its current location on Mill Bay Road until 2003. The business started as an air taxi for Zachar Bay Lodge, operated by Kyle and Glen’s father on the west side of

Today, Kingfisher Air, also known as Kingfisher Aviation, still flies to the lodge but has added many more destinations to its flight path. It operates regularly from April to November and is on-demand outside that period.

So far this season, Kingfisher Air has had clients from all over the world, including people from Germany, Japan, Spain and Denmark. The hot spots Kingfisher flies to most often are Frazer Lake and the Katmai Coast.

“This summer there have been a lot of people from everywhere,” Kyle said. “We have taken people from more countries than different states this year.”

When tourists book a flight with Kingfisher Aviation, the Eatons’ only request is they stay in Kodiak for at least three days, because of weather.

‘The people we get stay in Kodiak longer and are probably spending more money than all the cruise ship people and have a bigger impact for our community,” Glen said.

Glen and Kyle do all the flying for Kingfisher. Glen, 10 years older than Kyle, started flying first.

Glen wanted to become a commercial airline pilot, but after a stint with Peninsula Airways he decided bush piloting was what he wanted to do.

Kyle said many customers return because they are familiar with Glen’s flying.

“They fly with us because they know who the pilot is,” he said. “There is a lot of trust and loyalty around here.”

Kyle, after graduating from the University of Idaho, joined the company in 2003. Since then he has created the website kodiakweather.com, which gives aviators a comprehensive guide to the island’s weather. He achieved this by setting up webcams across the island.

“He has changed the face of aviation in Kodiak,” Glen said. “He has made Kodiak aviation 10 times safer than what it was five years ago because of the webcams.

“Normally, to get your weather around Kodiak, you have to make lots of phone calls and it will take an hour to find out what is going on around the island.”

Now, airlines can save money and time by visiting the website.

And as for being on Lilly Lake, the Eatons couldn’t be happier.

“As far as location, this is great,” Glen said. “We have hundreds of people a week just stop by and take pictures of the float planes. Before we had a fence they would be crawling all over the planes.”

Kingfisher Air can be reached at 486-5155 or on the web at www.kingfisheraviation.com.

Mirror writer Derek Clarkston can be reached via email at sports@kodiakdailymirror.com.