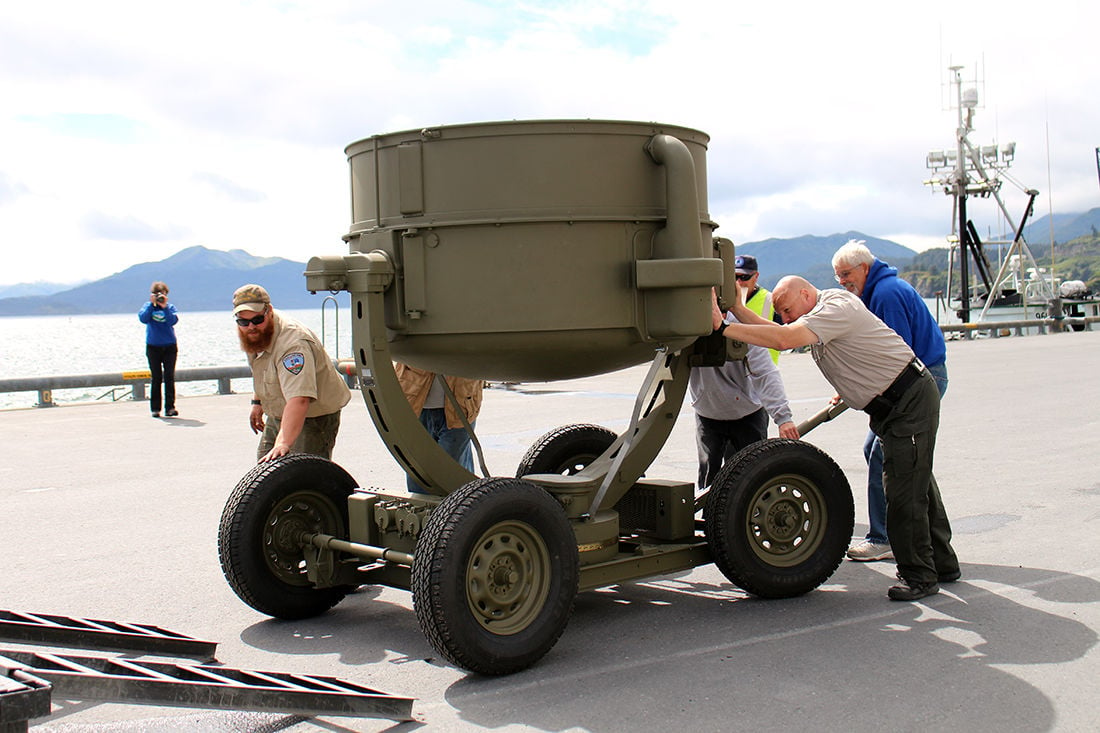 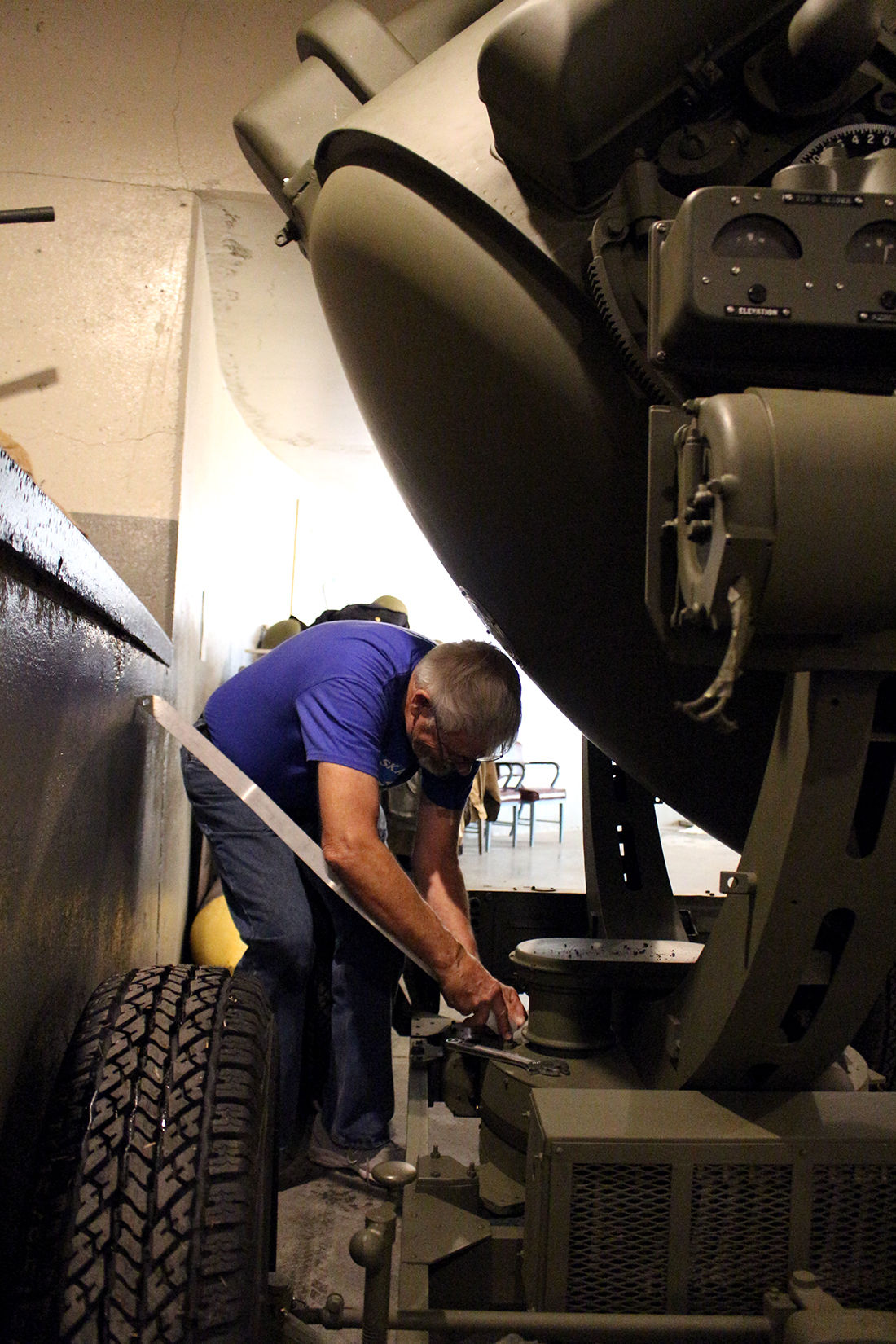 Chuck Meitle removes a brace to allow the searchlight to face out instead of facing up as it was during shipping, Thursday at the Kodiak Military History Museum. Julie Herrmann/Kodiak Daily Mirror

Chuck Meitle removes a brace to allow the searchlight to face out instead of facing up as it was during shipping, Thursday at the Kodiak Military History Museum. Julie Herrmann/Kodiak Daily Mirror

Retired machinist and tool-and-die maker Chuck Meitle and retired teacher Nancy Meitle have volunteered with Alaska State Parks for seven years and at Fort Abercrombie State Historical Park in Kodiak for five. They found the searchlight in a field of searchlights in Oregon, where they currently reside.

The man who owned the historic piece used to run a searchlight rental company, and the Meitles convinced him to it to Alaska State Parks and the military museum. Although the searchlight is not one of the ones used in Kodiak during the war, it is the same make and model.

Over the last year, the Meitles worked to restore it and find a way to get it to Kodiak.

The Matson shipping company wound up donating the freight plus funds to help with the restoration effort. Friends of Kodiak State Parks is also helping with costs.

Chuck Meitle did not keep track of how many hours he worked on the searchlight, but he said it took two months.

Except for a few small parts, most of the searchlight, built by the Sperry Company in 1941, is original, including the glass covering the front, the metal housing, and the mirror in the back that reflected the light.

It’s now fully restored down to the original shiny instruction plaques on the sides.

In the years since World War II, the searchlight acquired layer after layer of paint in a rainbow of colors from orange to blue to the original military green.

“I had to take it down to bare metal,” Chuck said. “Then I repainted it military green.”

Military green isn’t any old shade. Chuck said the particular shade varied depending on time period, so the “military green” used in WWII is a different color than in WWI or Vietnam.

The Texas company provided the exact shade that would have been used when the searchlight was made.

Even the plaques on the side he had to strip down to bare metal because they had been painted over in the decades since WWII. Then he painted them black and gently rubbed them with sandpaper to remove the paint from just the raised lettering.

He cleaned and polished the mirror to get it as close as possible to its original shiny surface.

He removed some of the old wire cables because they contained asbestos and were breaking down enough to be potentially dangerous.

He made an axle out of two broken ones and restored the gauges and protractors.

On Thursday, the Meitles and state park staff loaded the searchlight onto a trailer at Pier 2 and hauled it to Fort Abercrombie. There, they pulled the searchlight into the museum, where it will be viewable by the public starting this weekend.

The Meitles are also working on restoring a generator that in WWII would have powered a searchlight. The parts come from multiple generators and will take a lot of time to restore, likely more than Chuck spent on the searchlight.

Once the generator is restored, the searchlight could potentially be lit with new wiring.

“We would like to restore the bunker, and with the generator, put it in there,” said Preston Kroes, head of state parks in Kodiak, “It needs new wooden doors and an extra gate for security.”

The museum is open 1-4 p.m. Friday through Monday. Admission is $5 for adults and free for children under 12.

Gross has filed with the Alaska Division of Elections to run in the Aug. 18 Alaska Democratic Party Primary. The deadline to file for the primary election is June 1, and Gross is the only candidate so far who is signed up to challenge Sullivan.

Attorney: Disclosing Hilcorp finances would be harmful in business negotiations

The private company buying a 48.4% share of the trans-Alaska pipeline system bolstered its case for confidentiality of its financial records in a 25-page filing to the Regulatory Commission of Alaska on Feb. 18.