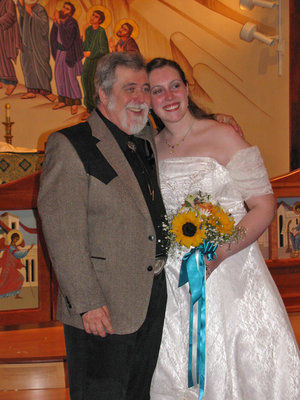 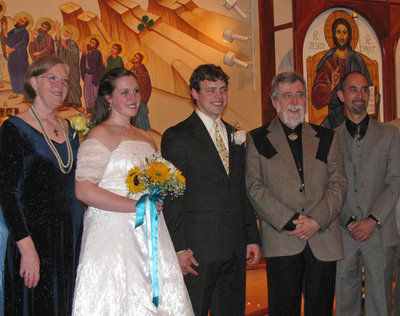 Giovanni and Cathy Tallino pose with their daughter and son-in-law, Savannah and Michael Smith, after their wedding ceremony at St. John’s. (Photo courtesy of Giovanni Tallino)

Giovanni and Cathy Tallino pose with their daughter and son-in-law, Savannah and Michael Smith, after their wedding ceremony at St. John’s. (Photo courtesy of Giovanni Tallino)

Retiring Kodiak High school English teacher Giovanni Tallino told his students that it doesn’t matter what kind of job you have, as long as you work hard and maintain your dignity.

Like many effective teachers, he used an example from his life to make that point.

Shortly after he moved to California from Italy to marry Cathy Craig, he got a part-time job as a kennel boy at a veterinary hospital (in addition to working as a teaching assistant at the University of the Pacific).

His duties included cleaning cages, shaving dogs and anesthetizing animals. He ended up working there for a year and a half.

It certainly wasn’t a dream job.

“That was a great motivator not to do that (type of work) for the rest of my life,” he said.

But it had its rewards.

He played a big part in rehabilitating a tabby cat that had been hit by a car. At first, the case looked hopeless. The cat was mangled, had a fractured jaw and could not walk.

Giovanni fed the cat by using a syringe containing a mixture of cat food and water.

“Every day, I had to force-feed it. I started exercising him.”

Once its jaw was healed, the cat could eat on its own.

Within a month, the cat “returned almost to normal.” When the cat’s owner, a little girl, came to get her cat, she gave Giovanni a big hug. That touching moment redeemed the year and a half he worked at the hospital.

Giovanni has always had an interest in animals. While he was a child living in Rome, he loved to hang out at the zoo. He would rather be there than elementary school, which he found boring and unchallenging.

“Mom started teaching me to read and write when I was 2.”

One day, she walked into the living room where little Giovanni was reading Pirandello’s “Lonely Man.”

“I was crying,” Tallino said. When she asked why, he told her that the print was too small and it bothered his eyes. But Giovanni thinks he was really crying. “I was feeling the pathos.”

As a child, Giovanni also liked to read outdoor magazines, which satisfied his curiosity about guns and hunting.

When he read an article about Kodiak, Giovanni “was intrigued by the description of the place,” he said. He also was fascinated by a picture of a Kodiak bear hide stretched across the front of a hunting camp cabin.

The man posing in front of the hide looked small. The bear must have been a 12-footer, he said.

Giovanni thought it would be nice to get to this Kodiak Island one day.

When he moved to the United States in the mid-1970s, he no longer had to experience the wilderness vicariously.

Hunting became a favorite pastime. His Kodiak hunting episodes have at times led to some uncomfortable, but in retrospect, intriguing encounters with bears.

One unforgettable incident occurred while he and his friend were duck hunting on a lake.

As Giovanni and his dog, Scout, stayed in their blind, he noticed a bear swimming toward him.

“When he was about 100 yards away, I figured I’d scare him by shooting in the air. He wasn’t fazed. Within a couple minutes, the bear was about 15 yards (away) in the middle of my decoys.”

Giovanni exchanged the bird shot in his 12-gauge shotgun with slugs and walked out of the blind, ordering his obedient dog to stay behind.

“I started doing what they tell you to do. I waved my arms, but the bear wasn’t fazed. It started playing with one of the decoys. He got his claw caught. He didn’t like that feeling. He stood up on his hind legs, with his hair coming out of his shoulders. He was riled up.”

Once the bear freed its paw, he started coming toward Giovanni.

“He was staring at me. At that point, I shot a shell right in front of him, spraying him with mud and water, which covered his face.”

By then the bear was about eight or nine yards away.

“The noise must have been deafening. It did not faze him. He turned to the side, maintaining the same distance, in a semi-aggressive posture.”

Meanwhile, his hunting partner came out of his blind a couple hundred yards away to see what all the commotion was all about.

“We were at a standoff. I was pointing the gun at the bear.” Suddenly it lost interest and started going toward his partner.

“When he saw the bear coming toward him, he disappeared behind the point. About a minute later, I heard the squeaking of his oarlocks.”

The hunter vigorously rowed his 12-foot flat-bottomed duck boat as fast as he could toward the middle of the lake.

“He darn near put it on step. I’ve never seen anyone go that fast.

“To this day, my partner said the bear came to my blind because it was attracted by my bad duck calling.”

Before moving to Kodiak in 1984, Giovanni and his wife — a music teacher — taught in California and Montana, where the hunting was good.

As much as the Tallinos enjoyed the “big sky” country, they longed to be in a place that was more spacious, majestic and wild. Only Alaska could meet those demands.

Giovanni treasured Kodiak for other reasons as well.

It has been a “great place to teach,” he said. “It’s a very safe environment. It’s a pleasure that there are many different kids from different ethnic backgrounds living together. We haven’t seen that anywhere else.”

Kodiak was also a good place for the Tallinos’ daughter, Savannah, to grow up.

Cathy, who has taught music in all of the Kodiak elementary schools, currently teaches at Peterson. She also has been teaching music in the villages, either by flying there or by using distance learning technology.

Now that he’s retired, Giovanni will have more time to devote to pursuits at times neglected because of his rigorous teaching schedule.

He writes fiction and non-fiction stories and articles for Italian hunting magazines, and he’s a poet. Occasionally, he takes up causes that are important to the community.

“The bright spot is your future fields and projects that are under evaluation. By 2030, if they all come in as advertised, we will still be doing closer to 500,000 barrels a day. That’s the good news.”

The runway’s original lighting system was installed back in the 1970s, according to Nenana Mayor Joshua Verhagan. In 2003, lighting was extended and upgraded to include a parking area and a ski strip.