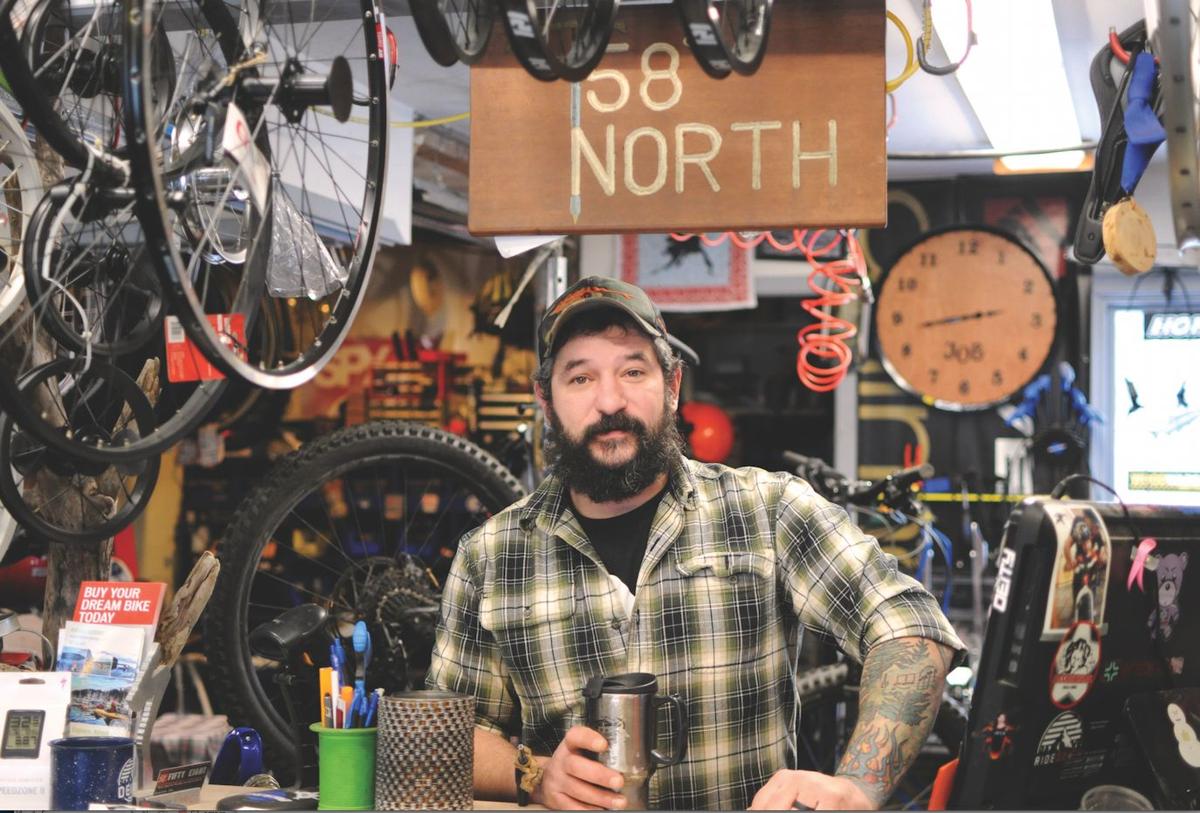 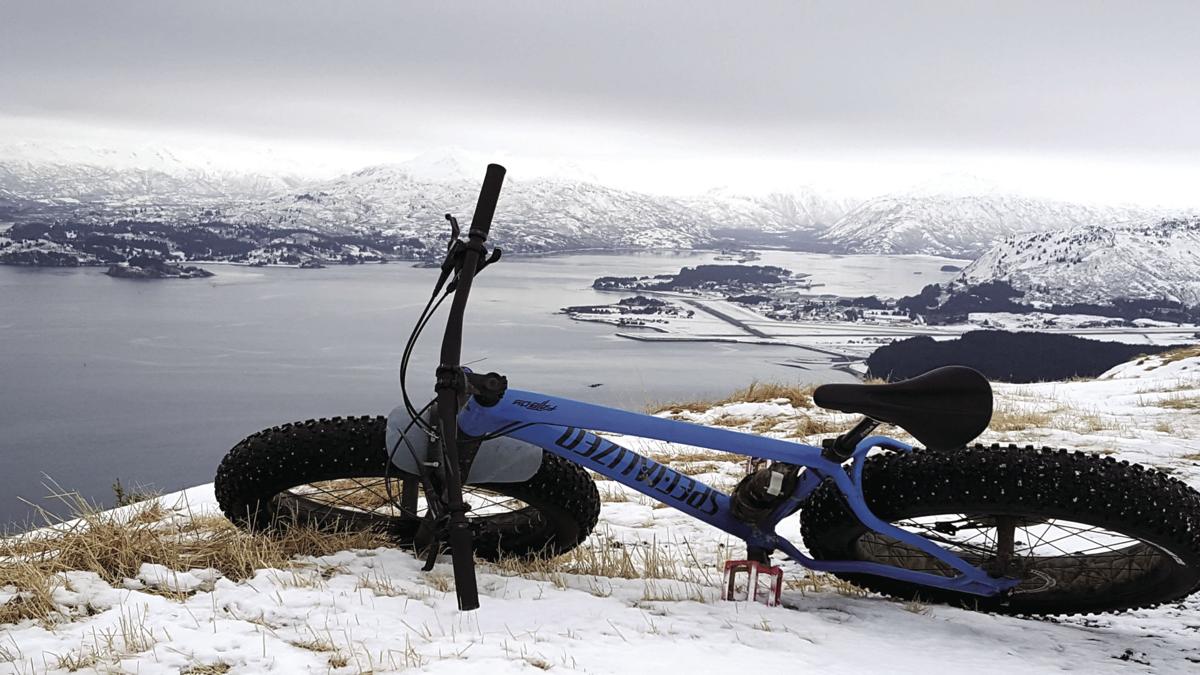 A fat bike on top of Pillar Mountain.

A fat bike on top of Pillar Mountain.

Some Kodiak residents may be waiting for warmer weather and thawed roads to hop back on their bikes, but according to a local cycling guru, Kodiak offers excellent riding year round.

“The winter riding here can be really good,” said Jeremiah Gardner, owner of 58 Degrees North, a bike shop that has served Kodiak for decades. “Kodiak is a pretty bike-friendly community.”

When heavy snow graces the island, as it did this year, Gardner said it opens up possibilities for “fat biking,” a form of cycling on wide, knobby tires that can be done on soft surfaces such as snow, sand and mud.

“Back in the day, guys used to weld two mountain bike rims together and put two tires on them. That’s how the fat biking thing got started,” he said. In the past decade, fat biking has become more popular, opening up possibilities for cycling in “really adverse environments.”

58 Degrees North carries all different kinds of bicycles, including childrens’ bikes, mountain bikes, city bikes and electric bikes. In the winter, many Kodiak cyclists choose to equip their bikes with studded tires, which allow riders to continue cycling even when temperatures drop.

Gardner said that the most popular mountain biking trails in Kodiak are around Pillar Mountain, where cyclists can find a trail for any difficulty level. The road up the mountain, closed to vehicle traffic during the winter, is an easy way to begin. But the mountain is home to a whole network of trails, some more hidden than others.

“At the top of the mountain, the trails are more technical. It’s not for everyone, but it’s really, really fun and you can work your way up to it,” Gardner said. “There are some medium-difficulty trails around the middle of the mountain.”

The Russian Ridge trail system, which spans from Pillar Mountain to Fort Abercrombie State Park and Monashka Bay, is a possibility for all levels of proficiency, Gardner said.

Kodiak is already home to a robust community of mountain bikers. Gardner sees some hardcore cyclists, some who enjoy the occasional ride in the mountains and some who use bikes just to get around.

Gardner has owned the shop for almost a decade. He bought it from previous owner Tim Howland, who was “like a dad” to Gardner when he was growing up on The Rock. He first became acquainted with the shop when he attempted to shoplift from it, at 12 years old.

The owner of the shop required Gardner to work for him for free as punishment for his errors.

“I started working at the bike shop from then on, until I left for college,” he said.

Gardner graduated from Kodiak High School in 2003. Then he moved east to attend music school in Boston and found success as a professional musician. As a guitarist, he played everything from gospel to heavy metal.

“I made some of my best friends riding when I was younger,” he said.

Even when he moved to the big city, he found himself immersed in the biking world. While living in Boston, Gardner worked for a bike shop frequented by professional athletes, including road racers and mountain bikers.

“I had been mountain biking before, but those guys took me mountain biking in some crazy places,” he said. “That opened my eyes to what was really out there and possible for mountain bikes. They were all so much better than me. When you ride with people that are better than you, your skill level seems to skyrocket.”

As a musician, Gardner got to travel around the world. But he kept returning to Maine and New Hampshire, which reminded him of home.

“I was spending all of my time in Maine and New Hampshire, being in the woods,” he said. “I came back here (to Kodiak) for a while and I was like, ‘I’m an idiot. Why did I ever leave?’”

In Boston, he rose to the rank of service department manager, overseeing a staff of around a dozen employees. But when the Kodiak store was up for sale, he returned to the island to stand at its helm.

“I like being able to go in any direction for a couple minutes and be able to ride or kayak and go explore over the next hill,” he said. “I’d much rather make a small amount of money and live in a cabin in the woods than make a ton of cash and live in a big city.”

Working at 58 Degrees North is very different from his experience in Boston, where he worked with the most advanced bikes on the market, often working on $50,000 worth of bikes every day.

“The nice thing about Kodiak is we do have a lot of people with really high-end equipment,” he said. “But I also have to do family bikes. The most fun part of my job is helping out little kids. Keeping little kids on bikes is what keeps me sane. Nothing is better than seeing kids get bikes.”

“Once you get to ride around, your bike is like your first car. It’s your first taste of freedom, to be able to get somewhere. For me, it was also a way to access adrenaline and jump off of big things,” he said.

Another favorite part of his job is serving a dedicated community of avid cyclists.

“Sometimes this place is a half-time psychiatrist’s office,” he said. “It sure feels like everybody is kind of family.”

The challenge is having to do everything, he said, from shoveling snow to paperwork. “Running the whole thing is different from having to fix stuff. There’s a lot more to it than folks generally realize,” he said.

For people looking to enter the world of cycling, Gardner said the number one priority should be size.

“That can make every bit of difference as to the person liking the bike or not,” he said.

In addition to their full array of bicycles in stock, 58 Degrees North sells Specialized brand bikes with free two-day air shipping. The store also offers 100% satisfaction guarantee, so if a customer is not satisfied, a bike can be traded in for another, and Gardner offers financing programs for those who can’t pay upfront.

The store also carries a wide variety of accessories, including studded tires. Gardner offers a full-service repair shop, for anything from state-of-the-art racing bikes to clunkers bought online.

“If you didn’t snap your frame in half, odds are good I can fix it,” he said.