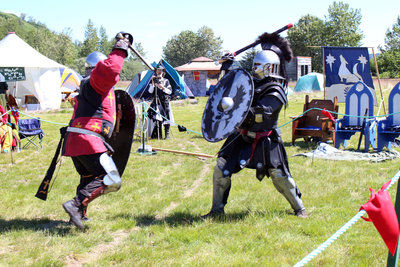 Two warriors fight at the renaissance fair just before the man on the right was defeated on Saturday. (Julie Herrmann photo) 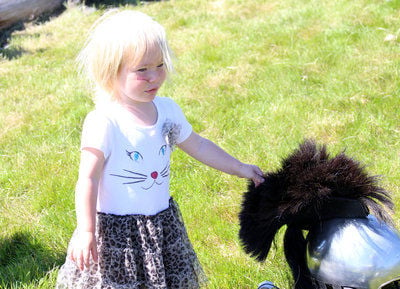 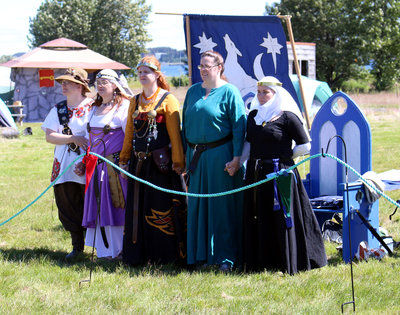 Several ladies watch the final match, including Princess Dagmar (center) who turned over the crown to Princess Isabella (second from left) who will be the princess for the next six months. (Julie Herrmann photo)

Two warriors fight at the renaissance fair just before the man on the right was defeated on Saturday. (Julie Herrmann photo)

Several ladies watch the final match, including Princess Dagmar (center) who turned over the crown to Princess Isabella (second from left) who will be the princess for the next six months. (Julie Herrmann photo)

Medieval re-enactment was the name of the game at the Kodiak Fairgrounds on Saturday and Sunday.

Dozens of people from Kodiak, around the state and California participated, as well as community members who came to watch.

It’s all part of the Society for Creative Anachronism, a 48-year-old worldwide organization dedicated to recreating the arts and skills of the Middle Ages and the Renaissance.

Although Pavlok Gorod, the SCA name for the Kodiak area, holds events through the year, this was the first time a coronation for the Principality of Oertha — the SCA region that covers Alaska — was held in Kodiak.

The coronations are held twice per year. Viscount Gregor Hawke won the tournament on Saturday, and he and his lady Isabella Hawke took over as prince and princess of Oertha in a crowning on Sunday.

Nowadays, no one gets injured in fights. The swords are not sharp and pointy ends are capped with rubber. The fights operate off the honor system. At the end of each fight, both fighters are asked if they are OK with the fight and if it was fair. Warriors decide for themselves when they are mortally wounded based on how hard they were hit and where.

Fighting is an exciting and prominent part of what SCA does, but it’s not all. People specialize in recreating as authentically as possible anything related to medieval life: artwork, metalworking, archery, sword fighting, clothing, music, dance and more.

“The fighting is very visible, but an artisan made that silk banner, took the time to learn how to work the silk,” said Brian Nelson, a German land baron in the SCA who goes by the name Fathir von Trier, as he pointed to a banner hanging from his tent. “A leather crafter made that jerkin, took the time to learn how to do that. There are many, many artisans that are out there. The clothing that we wear is mostly made by us.”

Sonia Clary, the seneschal, or a member of the administration for Pavlok Gorod, makes the clothing that she, her husband Jonathon and their three daughters wear when doing re-enactments.

“My clothes that I made, I live in,” Clary said. “We don’t regard them as costumes, because this is something that I wear frequently.”

The coat is modeled after one found in a bog in Ireland, Sonia said, and dates back to around 1560-1570.

Sonia adapted it so Jonathon could wear it for rapier fighting. The SCA has standards that fighting clothing has to live up to in order to keep the wearer safe. Jonathon’s coat was made out of a double-layer of heavy linen that was tested to ensure it could take hits from a sword without puncturing.

“There are very, very strict safety protocols in place designed to make sure that we have fun and don’t get hurt,” Jonathon said.

In Kodiak, there are 35 to 40 people who show up to events and participate, Sonia said. Within that, there are 20 to 25 paid members of the SCA.

“We’re a nonprofit educational corporation,” she said. “We really try to bring history alive and pull as many people in as we can.”

“We try to recreate what everybody remembers as the glory of the Middle Ages, the honorable things from that time period,” Brian Nelson, the German land baron, said. “The dream is living up to those Arthurian ideals, exhibiting chivalry at all times. Not just chivalry that says I’m big and bad, but chivalry that says I’m respectful of the ladies around me, or the ladies, I’m respectful of the men around me. Respect is the core word that binds it all together.”

A former state-licensed foster care provider charged last week with two counts of sexual assault was indicted Friday on 16 additional counts for incidents dating back to 1996.

According to the Park Service, a Robinson R44 helicopter took off from the Sheldon Chalet with two guests and one pilot at around 3 p.m. but crashed near the chalet shortly thereafter.

“Through discussions with other elected Republicans in the House, Mr. Prax demonstrated to members that he is the right fit to represent his district,” said Rep. Lance Pruitt, leader of the House Republican Caucus.