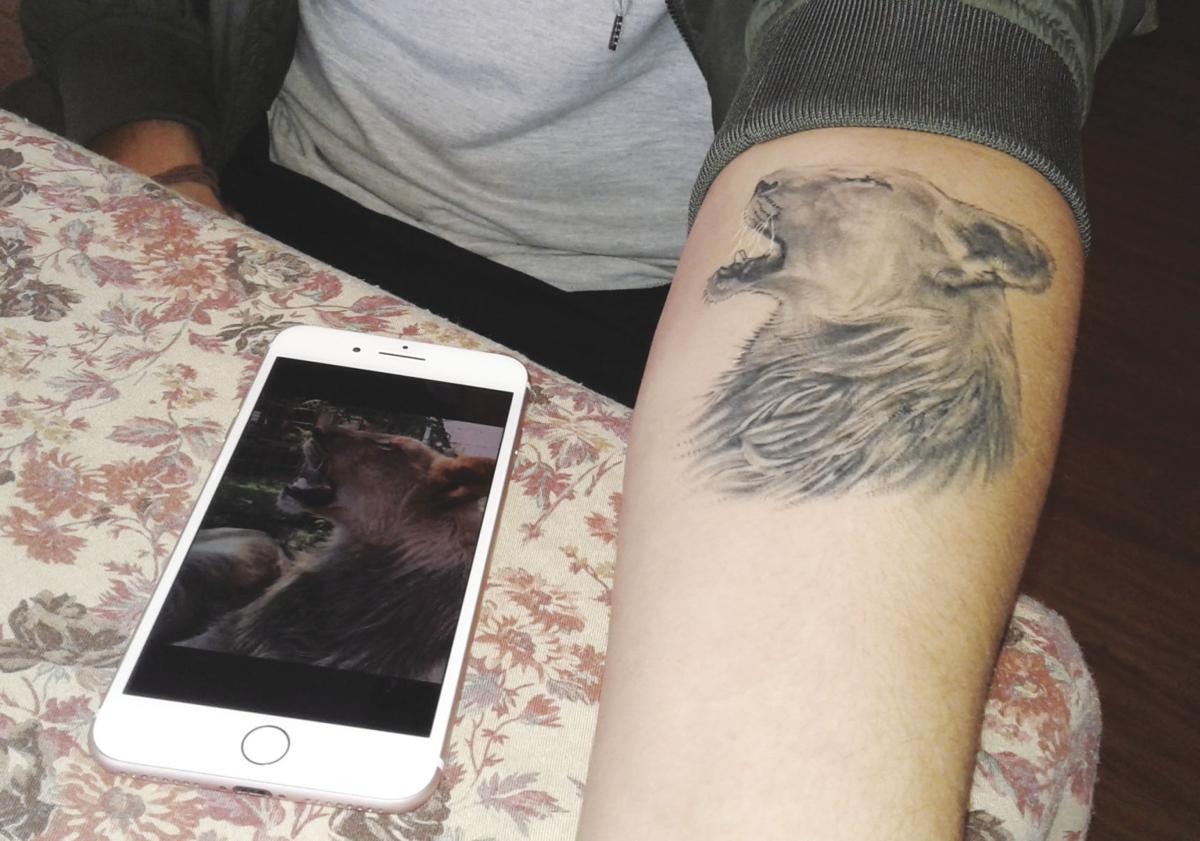 Noah Koller shows off his tattoo of Malachi, alongside a photo of the lion. 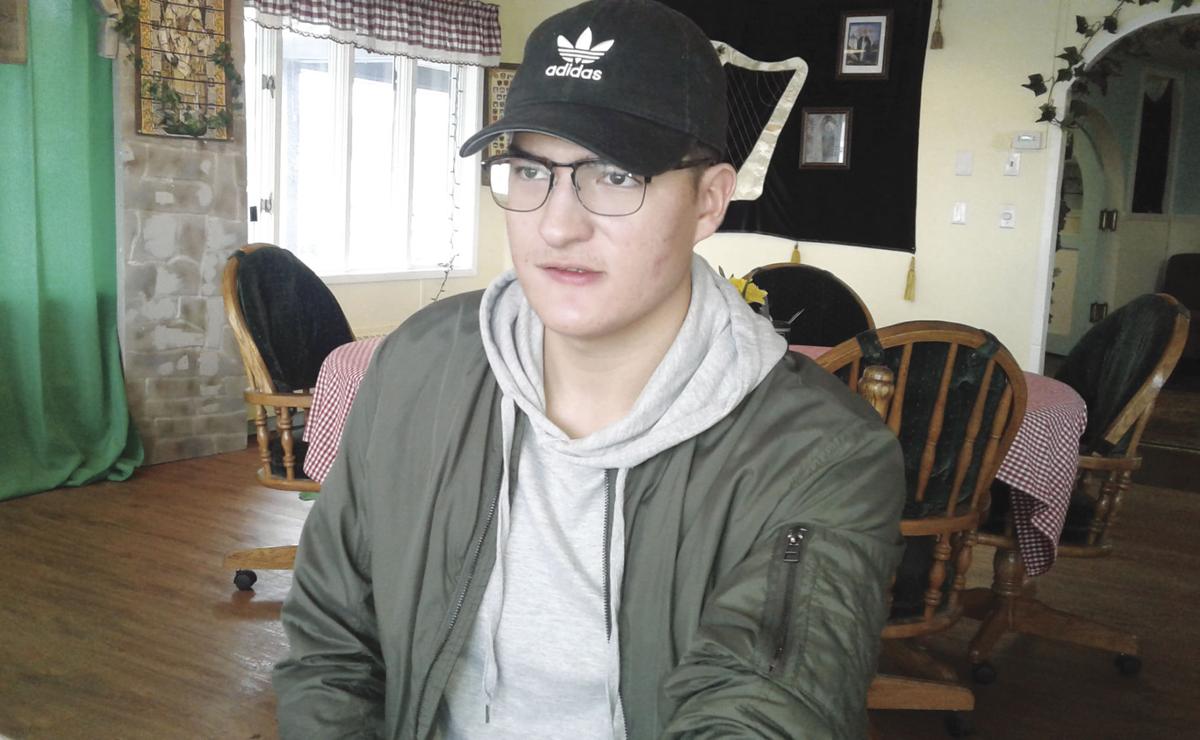 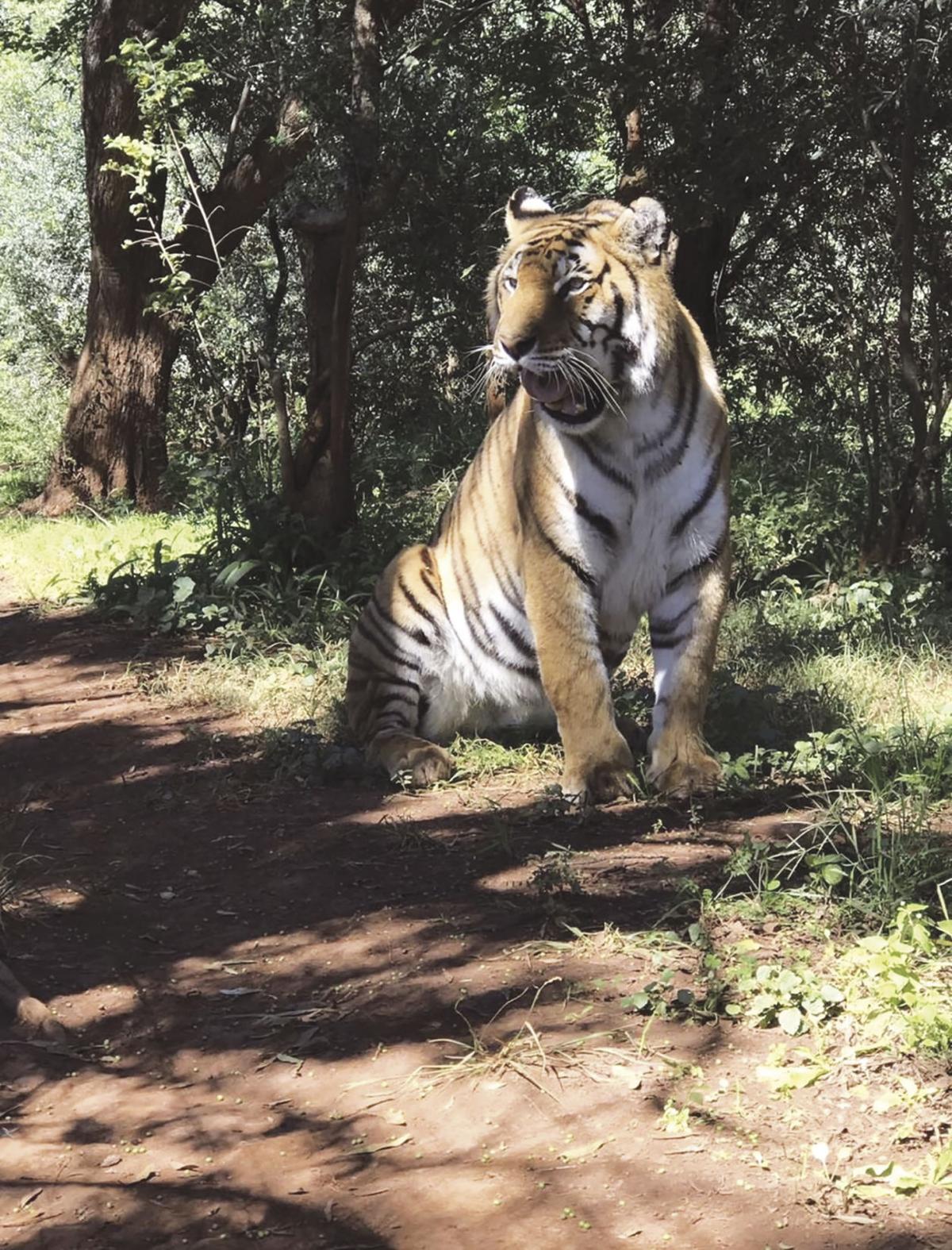 Noah Koller, a Kodiak High School graduate, spent his gap year volunteering at Go-Eco game refuges in South Africa and Zimbabwe looking after animals like the above tiger. 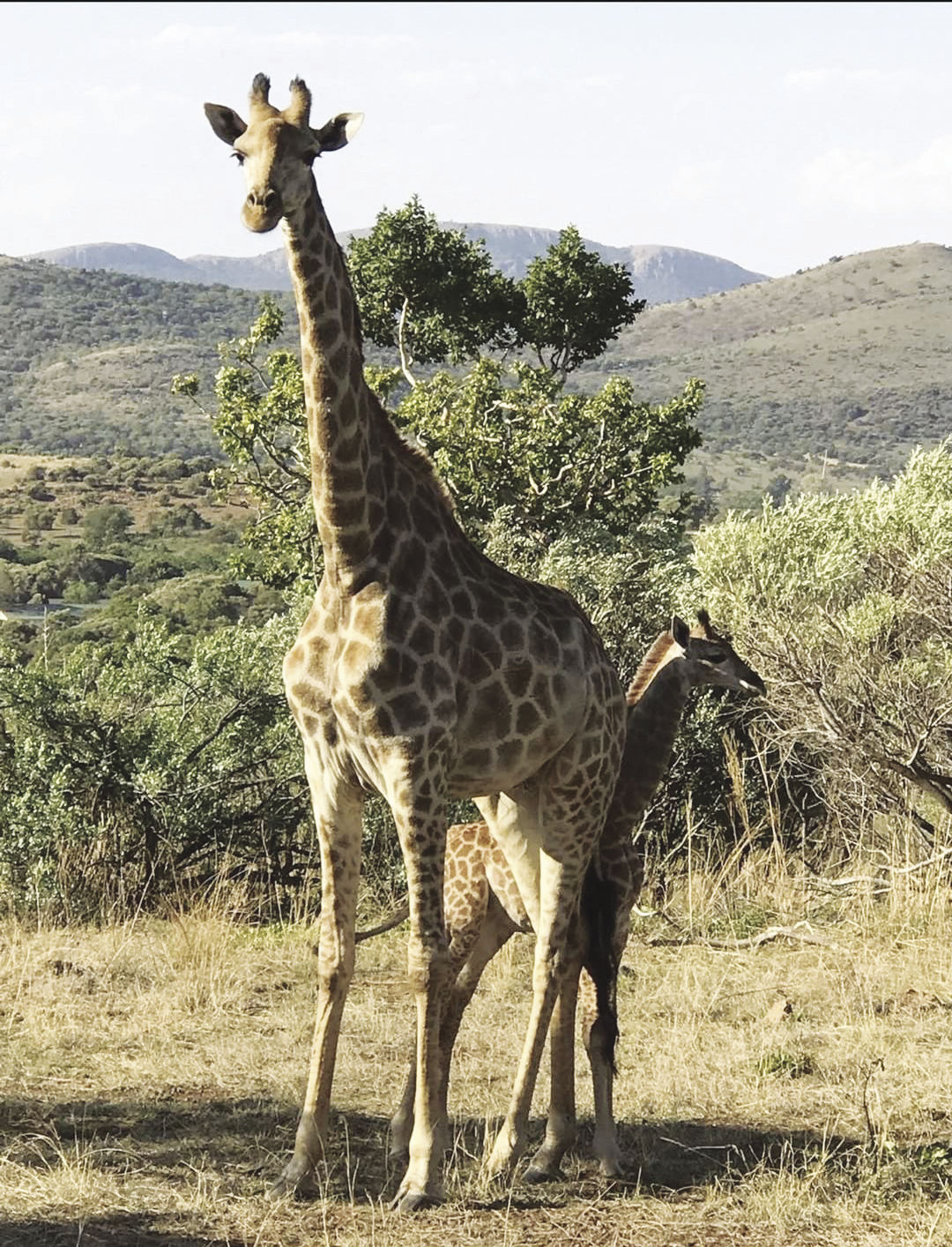 Noah Koller, a Kodiak High School graduate, spent his gap year volunteering at Go-Eco game refuges in South Africa and Zimbabwe looking after animals like the above giraffes. 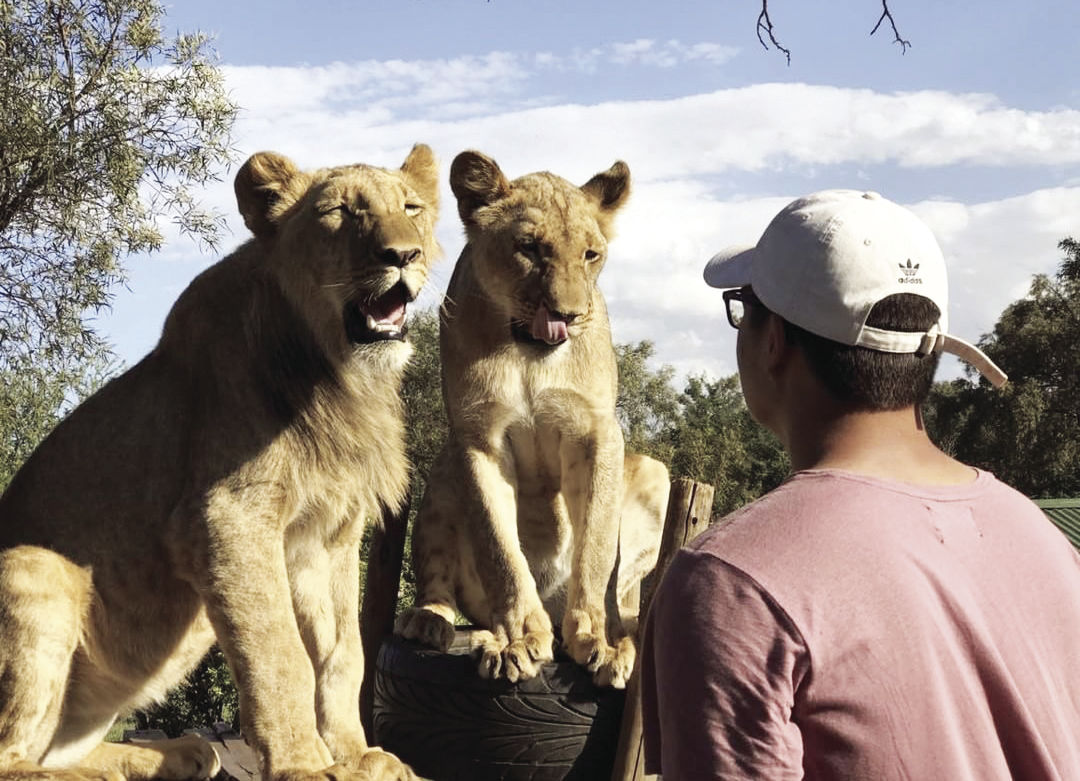 Noah Koller, a Kodiak High School graduate, spent his gap year volunteering at Go-Eco game refuges in South Africa and Zimbabwe looking after animals like the above lions. 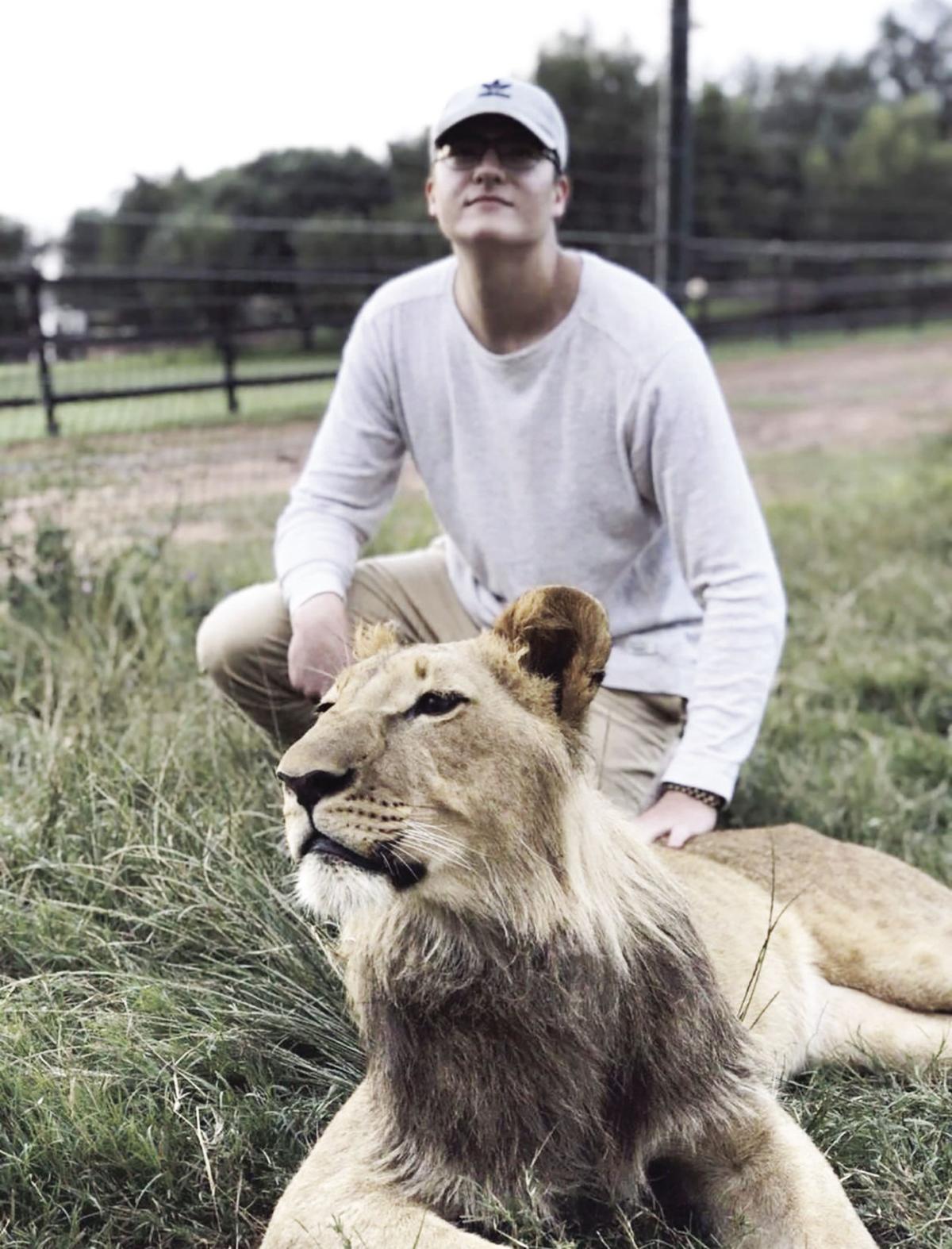 Noah Koller shows off his tattoo of Malachi, alongside a photo of the lion.

Noah Koller, a Kodiak High School graduate, spent his gap year volunteering at Go-Eco game refuges in South Africa and Zimbabwe looking after animals like the above tiger.

Noah Koller, a Kodiak High School graduate, spent his gap year volunteering at Go-Eco game refuges in South Africa and Zimbabwe looking after animals like the above giraffes.

Noah Koller, a Kodiak High School graduate, spent his gap year volunteering at Go-Eco game refuges in South Africa and Zimbabwe looking after animals like the above lions.

KODIAK — Noah Koller came back from Africa with tons of pictures, lots of stories and a tattoo bearing the image of a lion. Not just any lion. It’s Malachi, one of three cubs he became friends with at an animal refuge in South Africa.

Koller met the cubs, and many other interesting animals and people when he volunteered at Go-Eco game refuges in South Africa and Zimbabwe during his “gap” year, which followed his Kodiak High School graduation in 2017.

Initially Koller had planned to go to college, but an injury would have prevented him from playing basketball, so he decided to take a year off to let the injury heal.

Koller decided to take the advice of his father, Dr. John Koller, and do some traveling.

He volunteered in programs in South Africa and Zimbabwe where he cared for animals that had been orphaned, abandoned, injured, or brought up unsuccessfully as pets and had little or no hope for survival in the wild.

In South Africa Koller spent a lot of time with lion cubs, Malachi (which he also calls Kai,) Amalia and Nairobi.

Their mother had been stolen from a zoo and was being transported on a boat when authorities caught up with the vessel.

They found her starving and beaten, Koller said.

Officials tried to get her to the refuge as fast as they could. Enroute she died after giving birth to the three cubs.

In South Africa, Koller had a lot of hands-on experiences with animals. “They let us do things that would (normally) require a couple of years of training.”

The refuge was located near a lodge which is about a two-minute walk away. “Every now and then I’d see a safari car go by with people from the lodge,” said Koller. “Some of them got mad because they pay all that money to go there and then they can’t do half the stuff we can do with the animals.”

Koller had the privilege of exercising the lions and taking them and other animals on a trail on the refuge land which is huge, he said.

While tending to the cubs, Koller got an unexpected initiation. As he squatted next to Amalia, who was about four months at the time, she nuzzled her head under his arm, causing him to fall over. “All of a sudden Malachi and Nairobi get on top of me too. It was kind of scary.”

Kevin, the project leader, didn’t seem concerned. “Then I realized that they weren’t attacking me at all; they were loving on me,” said Koller.

Nairobi, the alpha of the bunch, was the one to worry about, said Koller. “You can tell when not to mess with her. Malachi has ADD. They call him a cat, but I see him more as a dog” because his tongue hangs out; he fetches things.

The refuge also took care of elephants, zebras, giraffes (which are free to roam) hyenas, hippos and two Siberian tigers, which were dropped off by a very wealthy man who kept them as house pets until they got too big and aggressive. Initially he wanted “tons and tons of money for them,” Koller said.

Although Koller didn’t witness any extremely aggressive behavior while in South Africa, he heard about a caged lion in another facility that had taken down its guardian when the man started to run. The lion started dragging the man but let him go when a worker called his name.

The guardian survived the incident. However, the lion was put down the next day.

Koller wonders if the same fate awaits Gerald, a giraffe that hung around the compound.

A photographer for a film crew that was filming wildlife in the refuge wanted to get good close-up footage of Gerald who was apparently evading him in the bushes.

Ignoring warnings to back up, the photographer moved in on him.

“Out of nowhere, Gerald runs toward the guy, swings his (neck) and hits him in head. The guy dies on the way to the hospital,” Koller said.

Koller heard that Gerald used to be quite friendly, but became very aggressive after his mate gave birth to a stillborn calf. Giraffes normally give birth standing up. “When the baby hits the ground, that thump triggers the heartbeat,” Koller said. Gerald’s mate “was having trouble giving birth, so they tried to help her by getting her to lie down.

“They couldn’t get the heart started after they got the baby out. Ever since then, Gerald had been aggressive. He never swung his head at people before that. We were told keep a distance from him.”

Koller was in South Africa two weeks in the fall. When he returned to Kodiak he worked at his dad’s clinic and went back to Africa in the spring, working at the Chipangali Wildlife Orphanage in Zimbabwe and returning to South Africa for a short visit.

In Zimbabwe Koller worked with non-predatory animals such as Minnie, a mouse bird (“She was probably my favorite.”) and Andre, a baby baboon. “He was the cutest little thing, feisty, really friendly. He mostly likes girls. They let us take him out. He held on to our side, or hung on to us like a backpack, or hopped on our shoulders.”

On an excursion in Zimbabwe Koller got to see rhinos, which, because of their valuable horns, are targeted by poachers.

“Some poachers come in, and instead of taking the whole horn, they knock the rhino out, and cut the horn with a chainsaw. The animals are left alive. I saw a few that had their horns cut.” Like fingernails, the horns grow back.

Koller said he really misses the African people, the animals –the whole environment. Working there gave him a different perspective on other people’s lifestyles.

Koller didn’t see his volunteer stints in South Africa and Zimbabwe as work. “I loved every day of it.”

A partnership with NASA will see a rocket light up the sky over Poker Flat Research Range next week.

Former State Budget Director Pat Pitney is coming back to the Capitol to serve as director of the Legislative Finance Division. Pitney will replace David Teal, who retired last month after serving in the position since 1997.