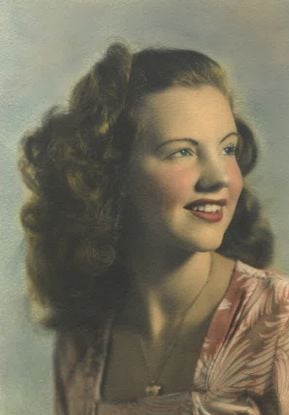 It is with great sadness that the family of Mary Chase announces her passing on Friday, June 14, 2019, at the age of 89 years.  She was born to the late Charles Beck and Louise Shade, July 20, 1929 in Stockton, CA.

As a young child, Mary moved with her family to Enumclaw, WA where her father owned a restaurant and fish farm.  Customers could catch their fish in the ponds and the restaurant would prepare the catch for them.  Later as a young adult, Mary worked at Arden Farms in Seattle making ice cream.

Mary met her husband Ron in Seattle and after they were married Ron got a job in Kodiak, AK working on the Navy base.  Ron left Seattle to start his new job. It wasn’t until several months later that Mary made her way up to Kodiak along with three small children, and their German Shepard, aboard the USS General Freeman.  She would reminisce about that trip.  Traveling by sea with small children, the youngest just 9 months old, them getting seasick and having to take the dog up to the deck to do its business.  She was very thankful for the crew members that saw how she was struggling and would come to her aid.

In the ‘60s Ron opened Chase Plumbing and Mary ran the office and took service calls.  Mary also ran the household and raised their four children.   Mary was an avid bowler and she and Ron were also involved in clubs such as the Elks Lodge and Pioneers of Alaska.  Mary was always known for being well poised, classy and a very caring woman.  Her doors were always open to those in need.

Ron and Mary were one of first to build a home out in the Monashka Bay area.  Mary especially loved living amongst nature.  She always had numerous bird feeders hanging with hundreds of birds visiting every summer.  She would teach the grandkids how to put out their hands and hold really still so the birds would land on them.  Mary loved all animals and through the years she and Ron had several German Shepards.

Mary took pride in her role as a home maker and a grandmother.  Her home was always filled with the laughter of grandkids.  She loved doting on them.  She would make jelly with the grand kids from the berried that she had grown in her garden.  She would sew things for them like clothing or things for their dolls.  Let them tear apart her couches to build forts.  As far as the grandkids were concerned, she thought a chocolate shake could fix almost anything.  And it did!

She also loved to garden and had quite the green thumb.  She grew some of the most beautiful flowers in her greenhouse.  Lilies were amongst her favorite.  She also had a beautiful garden outside that Ron had built for her.  There she grew Strawberries, Raspberries and Peas.  It gave her a sense of pride.

Per Mary’s request, there will be no service.  Cards can be sent to Ron Chase, PO Box 416, Kodiak, AK  99615.  In lieu of flowers, memorial gifts may be made to the Kodiak Animal Shelter.

It was busy, but not crowded, in the Fairbanks’ city center also. Face masks were the exception, not the norm, but social distancing was common.

The man initially denied knowing anything about the woman’s death but, according to the news release, “admitted to causing her death” and the death of a dog that was in the apartment.

“We’ve worked with school administration and activities coordinators to structure a consistent and effective method of training for coaching staff."