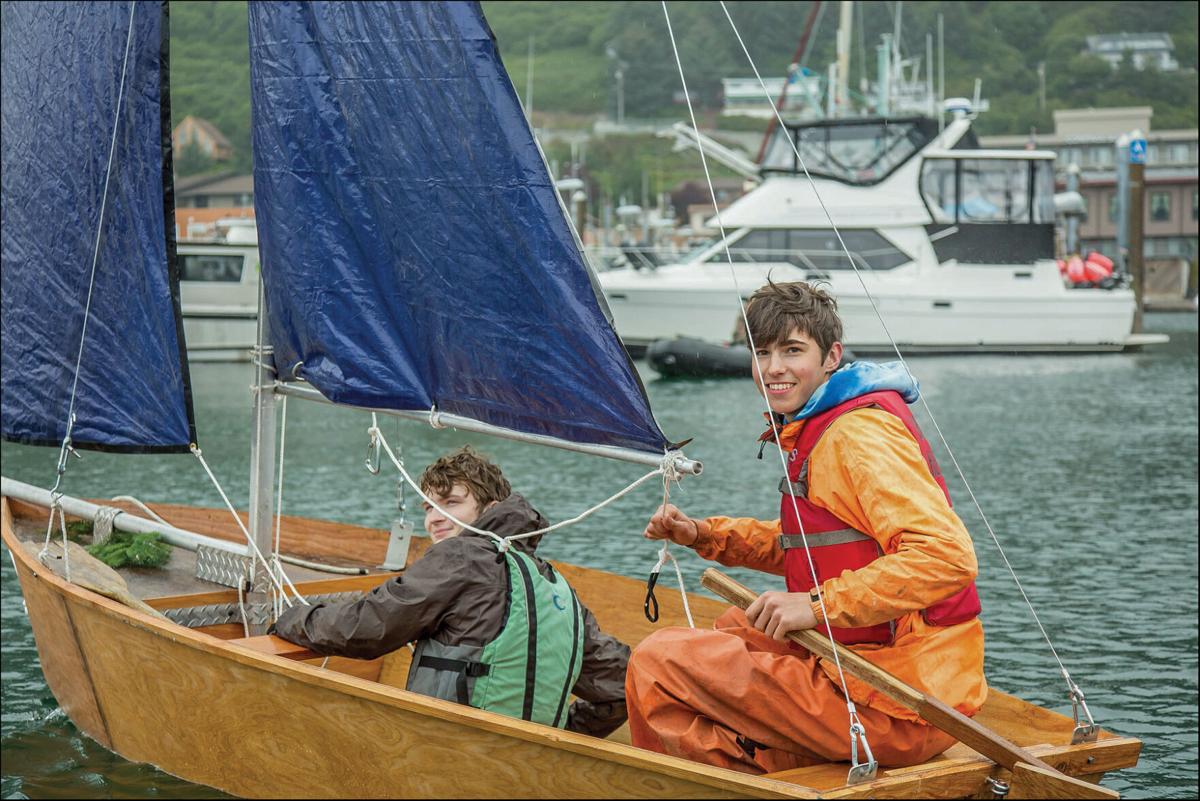 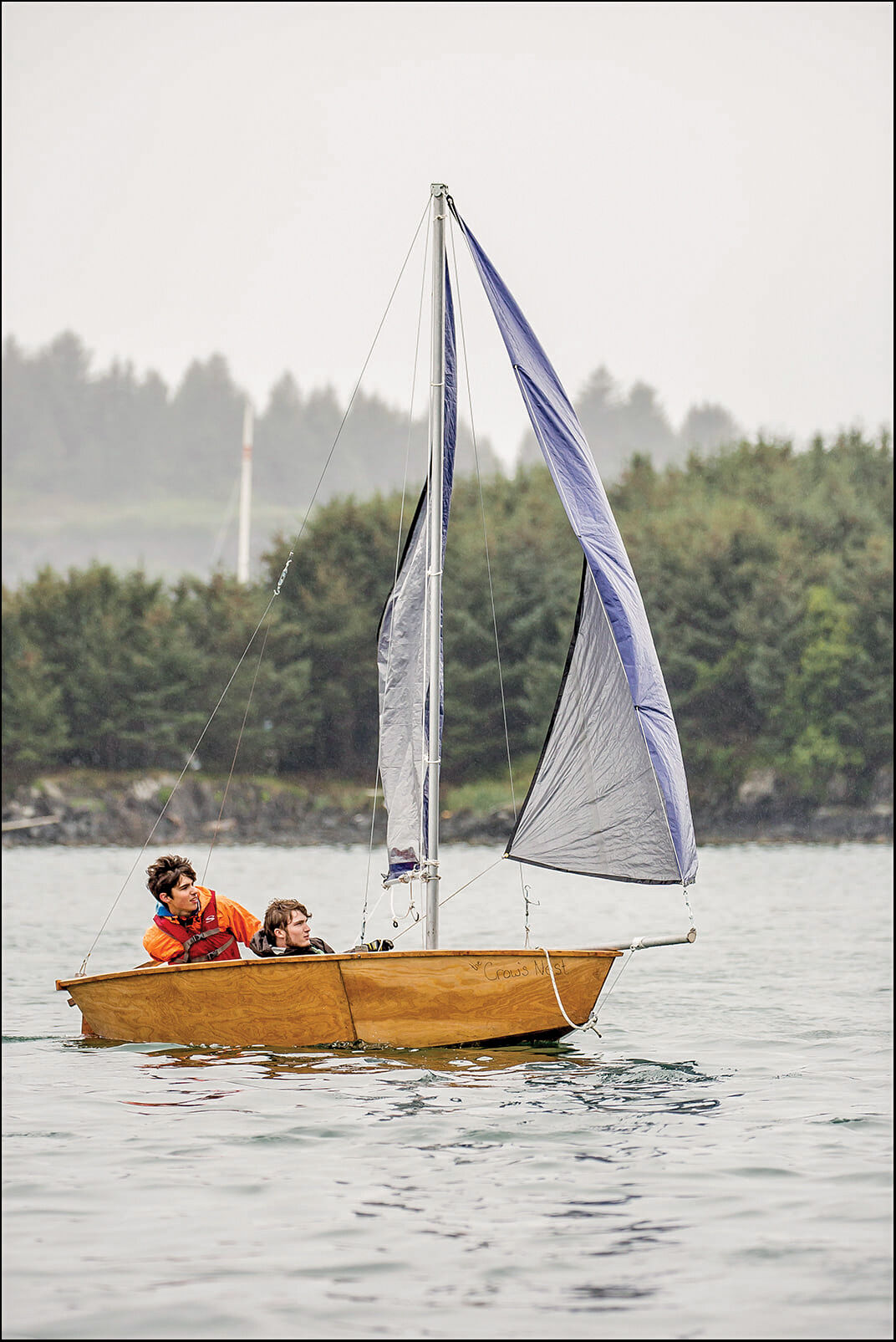 The maiden voyage of The Crow’s Nest.

The maiden voyage of The Crow’s Nest.

Cole Scott and Simon Corriere didn’t let the COVID-19 lockdown stifle their creativity. It stoked it.

These long-time friends decided to redeem the time of lock-downs and social inactivity by doing something constructive. They built  a 12-foot sailboat in less than a month.

They engaged in the project  during their spare time on weekends and evenings after work.

The boys dreamed up the idea after Cole showed Simon a trebuchet — a medieval catapult — he had made.

The boys knew that they would need to immediately get to work. In two-and-a-half weeks, Cole would be heading off to college.

The job at hand was to make a sketch of their boat, so they would have a blueprint to work from.

“At that point, we were not thinking practically,”said Cole. “We drew up plans for a mammoth boat” that would be 30 feet long.

The boys reconsidered the length after they asked Matt Corriere, Simon’s dad, if he had any plywood for the project.

When they told him the projected length of the boat, he convinced them to make it shorter.

“We did a little more drawing and came up with a 12-foot vessel,” with an additional two feet for the bowsprit, said Cole.

The boys consulted a myriad of sources to guide them through the building process and teach them the skills of sailing.

They logged onto websites, read through chat room conversations on the internet, and watched videos on the boat-building process and the art of sailing.

“It was definitely a learning process,” said Cole.

One of the most helpful tools, he said, was the DELFTship website.

“It was probably one of the best things we came across,” said Cole.

“We wouldn’t have been  able to  do it without it. We saw videos of people spending (as little as) one weekend building a boat the size we were looking at, to people spending years. We didn’t have a lot of time. We were a little bit worried, but the best thing we could do was just get going.”

The boys got 4-by-8-foot sheets of marine-grade plywood, as well as a couple of other items such as rope, fiberglass and pulleys.

Over the course of the project, they picked up other materials.

Discovering that the plywood pieces were not nearly long enough for the whole side of the boat, the boys cut them  into 2-foot-wide sheets, and made scarf joints in order to attach them together so they were longer. They put the pieces together at an angle and glued them.

“It was a little complicated,” said Cole. “We had to learn ‘on the go.’ But it ended up turning out pretty well.”

The building process, in spite of minor setbacks, went “remarkably smooth,” said Cole. “We never had to rebuild anything or change much of the design.”

But the proof of their work would be tested by facing the elements. After they tested the floatability of the hull, they prepared for the boat’s maiden voyage, which was scheduled for a Saturday, a couple of days before Cole was to head to Colorado for school.

On that Saturday, the boys scrambled to take care of finishing touches, such as putting on the bowsprit and finishing the rigging.

The boys launched the boat in St. Paul Harbor on a rainy, blustery evening.

“We rowed out a little bit from the dock and pulled up the  sails. The wind was a bit inconsistent, as usual,” said Cole.

“We were able to move back and forth. It was a little slow, but we had never expected the boat to be fast. We went around in the harbor for a little while and at a certain  point, decided to go into the Channel.

“Then the currents and winds picked up a little. We sailed around in there for a little while. It was a little bit nerve-racking. The wind went from nothing to almost blowing the boat over.”

At one point, the side of the sailboat was about a quarter of an inch from the water.

The boys were in good company. Dockside coaches hollered out instructions on how to handle the boat, while surrounding boats, including Treasure Island — skippered by Simon’s dad — were ready to assist them. One of the assisting vessels was an inflatable boat whose captain guided the boys into the harbor.

In spite of a few scary moments, the boat was “handling the wind remarkably well,” said Cole.

With the building process and maiden voyage behind him, Cole is concentrating on his studies at the Colorado School of Mines, an engineering school just outside of Denver.

In retrospect, Cole said he would do more preliminary planning before he took on another project like the one he and Simon just completed.

“We planned each part after finishing the preceding part,” said Cole.

“If we had planned all of the parts beforehand, that could have saved us some time, and a little bit of money too.”

Since both Cole and Simon invested equally in terms of time and money, they are looking at a couple of options for the boat, which they dubbed The Crow’s Nest.

“Most likely, somewhere in the near future, it’s going to show up in the Kodiak boat market,” said Cole.

Another possibility is that Simon will purchase Cole’s part of the boat.

For now, it will stay as is: tipped upside down with a tarp over it near the Corrieres’ house.