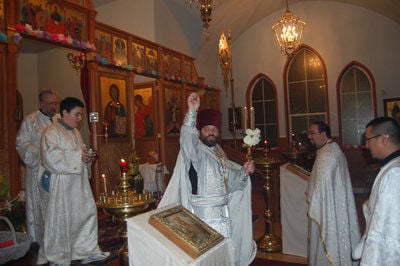 Archpriest, Fr. Innocent Dresdow of Holy Resurrection Orthodox Cathedral, pronounces the Pascha greeting, “Christ is risen!,” at Easter services in 2012. This year the Orthodox celebrate the Resurrection on Sunday, May 5. The all-night service begins Saturday, May 4, at 11:30 p.m. with vigil and matins. (Mike Rostad photo)

Archpriest, Fr. Innocent Dresdow of Holy Resurrection Orthodox Cathedral, pronounces the Pascha greeting, “Christ is risen!,” at Easter services in 2012. This year the Orthodox celebrate the Resurrection on Sunday, May 5. The all-night service begins Saturday, May 4, at 11:30 p.m. with vigil and matins. (Mike Rostad photo)

“Why don’t the followers of Jesus fast?” wondered the disciples of John the Baptist. Since then, questions about fasting — refraining from certain types of food or any food — have abounded.

Some scoff at the whole idea of prescribed fasting, which for Orthodox Christians means eating no animal products and taking on a more rigorous prayer and church life. Do you mean one could give up eternal bliss and endanger his soul by devouring a double cheese burger during Lent, or, as someone asked, “How can giving up chocolate during Lent bring me closer to Jesus?”

Deacon Irenaios Anderson, professor at St. Herman’s Seminary, said Lent is not about chocolate or hamburgers, but the struggle to subdue the passions and appetites.

“The important thing is giving up something that controls us,” he said. “If I can control what I put in my mouth, I can probably control anything. If gluttony controls me, it’s appropriate to address it.”

Anderson points out that Lent, which continues for Orthodox Christians who celebrate Easter (Pascha) on the first Sunday of May this year, is a time in which a Christian pays special attention to the barriers that keep him or her from getting closer to God.

“Fasting is not depriving ourselves, but seeking something better which is God Himself,” Anderson said. “We’re looking at giving up that which is less important for that which is ultimately important. It’s a matter of priorities.”

Fasting “does help us get close to Jesus,” Anderson said. “It helps us throw off the weight that so easily entangles us, (referencing Hebrews 12:1.) There is very much a connection between what weighs us down in this life and our spiritual life.”

Initially, Lent was designed for catechumens — those preparing to be baptized into the Christian faith. “They learned how the Church expects us to live,” Anderson said. “Now all of us participate with the catechumens” by following prescribed rules.

Besides fasting from animal products, special attention is given to almsgiving, and there is a regimented cycle of long services that include prostrations and hymns of self-examination.

Some may not be able to keep up with the requirements of the Church, Anderson said. “We need to see that fasting, as with anything else, is a question of the relationship with one’s spiritual father. He knows where you are and what is the best thing for you.

“Very often, spiritual growth (comes in) baby steps. We try to do a little bit better than we did last year.”

Some fasting restrictions may be lifted in Alaska Native communities, where people depend on a limited diet of meat and fish. “There’s not a lot of fruit and vegetables on the Kuskokwim,” Anderson said. “The fast can be relaxed for an entire people.”

Apparently a Russian bishop didn’t understand this in the 1800s when he perused the journals of the missionary priest, Fr. Yakov Netsvetov. Coming across a journal entry in which Netsvetov alluded to eating moose, the bishop penned the comment, “During Lent?”

Several years ago, an Alaska bishop (not the current one) had a similar reaction to Pribilof Island parishioners who put on a lavish feast for his visit during Lent. Instead of thanking them for their hospitality, he scolded them for their violation of the fast.

Ironically, their kindness and hospitality were perhaps more of a Lenten activity than a strict adherence to dietary rules.

Father John Dunlop, dean of St. Herman’s Seminary, says that the faithful need to be on guard during their fast lest they get caught up in rule-keeping. “There’s more to (Lent) than that,” he said. “The most important (purpose of the) fast is to return to God and our repentance.”

“The whole idea of the fast is to help us, not to be a burden on us,” Anderson said. “It is meant to lead us to our salvation.

“As St. John Chrysostom would have pointed out, if you fast from meat, you also need to fast from devouring your brother by sinning against him.”

Lent is not a punishment, but a means to draw closer to God, said Fr. Chad Hatfield, chancellor of St. Vladimir Seminary in New York and former dean of St. Herman’s. “We try to imitate the diet of Adam and Eve before the Fall. We don’t eat animal products (but rather partake in an) angelic diet.”

Referencing the late Fr. Alexander Schmemann, longtime dean of St. Vladimir, who called Lent a time of “joyful sorrow,” Hatfield said the season is “sorrowful because we know what we have to pass through to get to Pascha or Easter. We look forward to the aesthetic discipline that draws us closer to God.”

In his book, Churchly Joy, Orthodox Devotions for the Church Year, Sergius Bulgakov says the Great Fast is a “luminous time ... of repentance, a joyous time and a difficult time. Both a solemn seriousness and a particular lightness enter the soul when it surrenders itself to repentance. Our soul rises above the level of the everyday and breathes the rarefied, invigorating air of the heights. The Great Fast gives us a sense of responsibility for our life, a vision of ourselves before God in the light of eternity, together with an acute consciousness of our sins, as if a last judgment upon ourselves. The light of the Great Fast permeates the darkness of our souls.”

The purpose of Lent, according to Orthodox theology, is embedded in the answer that Jesus gave John’s disciples who were curious about lax fasting practices.

The Church is in exile in a world that is spiritually dark and broken. Following the somber season of Lent, Orthodox Christians will see the fruit of their labors as they celebrate the eternally bright resurrection of the risen Lord, who “trampled down death by death.”

Mike Rostad is a freelance writer and longtime Kodiakan who writes a weekly column examining the in-depth stories of Kodiak residents. You can read more about other Kodiak islanders in Rostad’s book, “Close to My Heart-Writing and Living Stories on Kodiak Island, Alaska.”

Some students are excelling under the remote learning model, while many students are feeling isolated and are falling behind, according to comments from survey takers.

Big hike in virus fatalities while ventilator use also ticks up

The state logged 583 new virus cases with 20 of those in the Fairbanks North Star Borough, the report stated.

For Thanksgiving, meeting the demands of feeding Fairbanks

Fairbanks Community Food Bank is expecting to beat its record of serving the total of more than 100,000 pounds of food to 2,500 households, Director Anne Weaver said.